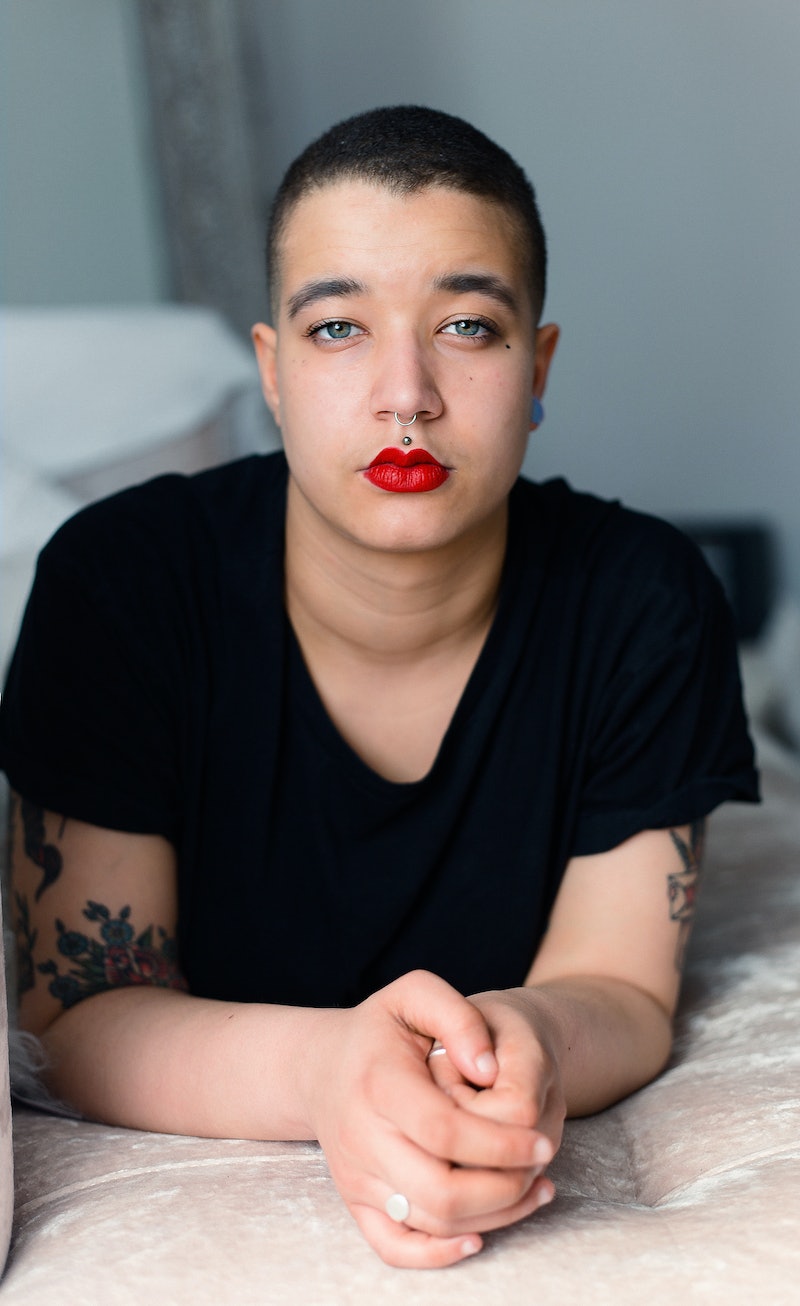 With award-winning photographer Substantia Jones of The Adipositivity Project and Manchester-based photographer Paddy McClave, Bustle presents A Body Project. A Body Project aims to shed light on the reality that "body positivity" is not a button that, once pressed, will free an individual from being influenced or judged by toxic societal beauty standards. Even the most confident of humans has at least one body part that they struggle with. By bringing together self-identified body positive advocates, all of whom have experienced marginalization for their weight, race, gender identity, disability, sexuality, or otherwise, we hope to remind folks that it's OK to not feel confident 100 percent of the time, about 100 percent of your body. But that's no reason to stop trying.

Growing up in Hertfordshire, a market town 40 minutes outside London that Lex describes as "nice, but not very inclusive," they never quite fit in. It's the type of place where golliwogs can still be displayed in shop windows. Two years ago, Lex's best friend complained about one in particular on their behalf. "She got slated," Lex says. "People were horrible to her."

As a child of an interracial relationship, Lex stood out. They didn't look like everyone else, dress like everyone else, have the same type of hair as everyone else, or act the same as everyone else. "I've always been weird," they muse. "I was always introverted. I could also read at a very high level when I was younger. I did find myself getting bullied quite a lot and it was mostly because of my appearance [...] I found it really difficult because you can’t hide your skin color and I think for a very long time I wanted to do that."

From the ages of about 7 through 16, Lex says they didn't value themselves much at all. "I think the difficulty with me was that because I was predominently raised by my father, who was white, I never fit into either black or white," they explain. "But I also had this whiteness that was put on me. There was no space for me to be mixed race." In not having close ties to their mother, Lex adds that they struggled to learn about what it might mean to be black as well. Or, at the time, what it might mean to be a black woman.

The struggle to identify fully with their skin wasn't just down to race, though. It was the "woman" thing, too. Or rather, their disconnect with the womanhood they were being assigned. "I used to identify as a lesbian, because I thought that was what was going on with me," they say. "There was just so much going on, but when it all sort of plateaued into being normal was when I had this realization that I was genderless and that that was my identity."

Although they love their father, he never really asked what might be going on with Lex to make them dress differently to their peers, or listen to different music, or read different books. The question was, instead, "Are you a lesbian?" Discussing race wasn't something they did with one another, either. What Lex learned is that when internalized racism and gender identity confusion combine, the end result isn't especially pretty. "It led to me hurting myself at a really early age," they say. "Like, earlier than 10 is the earliest I can remember doing it."

Back then, Lex didn't really have the language to describe or fully comprehend the internal conflicts they were experiencing, and these conflicts often manifested as anger. It was actually Tumblr that helped acquire some of the necessary terminology. "The good thing about Tumblr is that people get to find the vocabulary that they wouldn’t have necessarily found through education, because so much of school is still very much set to old, white male ideals," they note. "So it was really through Tumblr [...] that I realized there’s this thing called non-binary. I’m neither here nor there, which is something I can thank the internet for I suppose."

Pre-Tumblr, Lex tried to assimilate for quite some time. Throughout secondary school, they were part of a small girl group that they had nothing in common with. "I’ve always sort of dressed or appeared differently, but it was stuff like going along to sleepovers, or nights out clubbing, when I realized I just didn’t fit in," they recall.

They'd later try "manning up," or becoming one of the bros. "That was way more laid-back. Like drinking beers, lounging, all that sort of stuff," they remember. "But then the conversations weren't something I was connecting with."

Because Lex felt "neither here nor there" in terms of the color of their skin as well as their gender identity for so long, the proud embrace of their blackness has been quite the progressive, affirming shift, and literature has been a huge part of that process. "I read The Autobiography Of Malcolm X to begin with. I also read The Color Purple. My favorite book is To Kill A Mockingbird," the now-literary scholar shares. "I started realizing that my blackness wasn’t something to be ashamed of. I read Angela Davis, something else that made me think, 'Hey, I should be proud of me.' I was making these connections, especially with women with big, old 'fros who were loud and happy. Not loud and disrespectful. Loud as in unapologetic about who they were. And I loved that."

An especially close connection to a black woman in their real life was also indescribably life-changing. Lex's Auntie Cc entered their life when they were about 14 or 15 years old. Looking back on it, Lex wonders whether their father introduced them "so I could have a connection to my blackness; so that my heritage, or my culture, wasn’t completely ignored."

"My Auntie Cc is a very strong black woman," Lex adds with unabashed warmth. "I feel like I get a lot of my strength, especially when it comes to my skin, from her. Her involvement in my life [...] helped me stop hating myself [...] She was one of the big pushes in me being proud of myself."

Unsurprisingly, perhaps, Auntie Cc helped further affirm Lex's non-binary identity later in life. "When I told [her] very recently actually, I cried, and I cried, and I cried and was like 'it’s another weird thing about me that I want to talk to you about.' Because normal adolescence isn’t weird enough," Lex says. "And the first thing she said was, ‘Of course you are. You’re Alexandria.’ And then I cried some more. It was nice. Like, she got it."

Certain changes in aesthetic have been useful tools for Lex as well, who has adopted myriad tattoos across their body. Many of their ink rests on their arms and legs. They are parts of the body that have been a struggle to love thanks to tight muscles that "don't work like they're supposed to sometimes." Lex once had a habit of cutting, scolding, or punching them as well.

Now, however, they are parts of the body they can appreciate for not being specifically gendered as per cultural standards. And, perhaps, for carrying them through so many journeys. "I stuck some art on them, and now I can look at them and be proud of the person I'm making," they explain. "My tattoos are the biggest step I've taken to making this body my own. If I hadn't put art where it is, my body would look very different to how it looks now because I had this habit of hurting myself. But now I look down and I can see art that I'm proud of."

Shaving off all of their hair helped, too. "Everyone was always very obsessed with my hair," Lex says. "I used to have a big old victory roll — this bride of Frankenstein, big old pineapple. Even I was obsessed with my hair. It was a huge thing to do with my blackness, and it was the thing that I thought was the most attractive about me and the most ‘me’ thing. I think when I got rid of it, I realized that skinhead, short-haired Lex is actually more me."

It's a decision Lex now describes as "a relief." Although they believe there's still quite a bit of stigma surrounding having a shaved head, they say that "as soon as all of my hair came off and I had to just look in the mirror and look at me, it was quite cool. With my hair, I’m Type 4B, and I’m quite light-skinned in comparison to my mother and my brother, so I felt like all of my blackness was in my hair. But then I realized that it’s not just about my hair. It’s about me as a person."

"There were so many things going on when I was younger, and so many things that I had to figure out for myself," Lex says. "I’d like to think that if I have kids, or if anybody like me has children, those children won’t have to go through similar experiences of having to search and make connections and just having this really confusing time of feeling so alone because they haven’t got that language or friendship group."

In order to help that happen, Lex is going to keep talking about being a child of an interracial relationship. They are going to keep owning their blackness. They are going to embrace being genderless. "I'm very much me," they reflect. "I think even compared to how I was when I first came out about my identity, I look at that little Lex (or smaller version of myself) and think, 'Wow, I’m still growing into this process of being me.' Whether it be my extending collection of tattoos or how much I change up my hair, I’m still figuring it out. But I am me." And that's all they need to be.

More like this
Instagram & Facebook May Finally Lift Their Notorious Nudity Ban
By Allie Fasanella
Selena Gomez Dismissed Trolls' Comments About Her Body After The Golden Globes
By Stephanie Topacio Long
15 Vegan Makeup Brands To Shop For Cruelty-Free Glam
By Audrey Noble
Blake Lively Debuts Red Hair For The 'It Ends With Us' Film Adaptation
By Olivia Rose Rushing
Get Even More From Bustle — Sign Up For The Newsletter
From hair trends to relationship advice, our daily newsletter has everything you need to sound like a person who’s on TikTok, even if you aren’t.