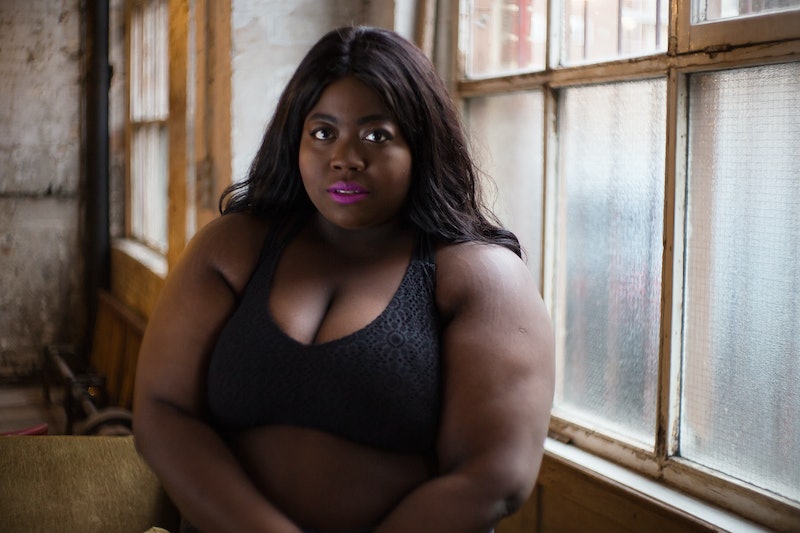 Stephanie Yeboah of Nerd About Town can often be found expressing unpopular opinions on Twitter. From her disenchantment with the mainstream kind of body positivity that fails to cater to visibly fat bodies, bodies of color, or differently-abled bodies, to her disappointment when yet another "inspirational" brand campaign surfaces highlighting not one non-hourglass, non-white individual, to her call-outs of straight size writers and celebrities who appoint themselves voices for plus size humans, she is constantly asking for more: More representation, more inclusivity, more celebration of otherness.

The Ghanaian British style blogger can also regularly be found posting fearless outfit of the day shots in which she rocks bright yellows, bold patterns, and cellulite-baring skirts. But when it comes to discussing body image and, specifically, fatness, she's about as real as they come.

You see, the ability to conceptualize fat-phobia as the harmful, unnecessary evil that it is and to wear bodycons that show off some of her rolls doesn't cancel out the bad days. For Yeboah, learning to love and respect her body doesn't mean she never questions it or looks in the mirror with a critical lens. She has her off days. But it's her realness about things like her arms, adorned in myriad stretch marks, that makes her a voice in size acceptance worth following.

"Stretch marks still carry this stigma of being the pièce de résistance of fatness," she tells Bustle in an interview. "So I [used to] restrict myself to wearing jumpers or at the very least three-quarter length clothes even in summer to prevent people staring at them."

Such is a routine many fat people are undoubtedly familiar with: You might not be able to physically shrink your body with the snap of your fingers, but you can sure as hell try to hide it beneath long-sleeve garments. And when you've been confronting your body's otherness since junior high, it's a hard cycle to break out of.

"I remember being made aware of [my body] on my very first day of secondary school during PE class," Yeboah remembers. "It was the first time I recognized the vast difference between my body and the body of all the smaller girls at school. All the girls were lean and had flat tummies, and I was pretty chubby and had bigger arms. It was at that moment that I realized that I was different to everyone else."

Although her arms have long made Yeboah feel like an undeniable fat person — a thing that we're largely conditioned to perceive as deplorable — it was her own refusal to hide that served as a turning point for the blogger. A few years into running her personal website, she took a raw photo of her stretch marks that she then posted on Instagram for anyone to see: For anyone to potentially pick apart.

"Taking something so personal and throwing it out on a public forum really helped me accept my 'flaw' as I received so many positive comments and stories from other people," she tells Bustle. "My arms and marks are normal, so why shouldn't they be on show for all to see?" When you consider the fact that stretch marks are signs of physical growth, change, and maturation — processes all humans go through — it's not difficult to imagine that most people might have them. About 90 percent of women have cellulite, after all. We just don't see either characteristic often enough in the mainstream media imagery we consume. That's why "posting such photos up on a constant basis normalizes the flaw" and helped Yeboah feel a lot more confident in her own skin.

What also assisted Yeboah on the road to normalizing her arms and every stretch mark on them was a bit of mindful, practical thinking. "Don't assume that everyone is staring at your flaw when going out because chances are, they aren't at all," she says. Too often, we are our harshest critics. Body shaming undoubtedly exists, yes. And oftentimes, people will probably choose to express their feelings about your figure both online and IRL. But many times, they won't. Many times, the fear of wearing the strapless dress is the biggest source of negativity to contend with.

For Yeboah, taking things gradually is crucial. If arms are your harshest struggle, she advises to start the journey to improved body image by wearing an item of clothing with reduced sleeves. "One day, it can be a three-quarter length," she says. "Then the next day, try upping it to a short sleeve, then capped sleeves, until you get to a strapless top and see how you feel."

If you're anything like Yeboah, you might just learn that your world won't end. In fact, you might just feel pretty damn good for eschewing the negativity your culture wants you to feel about your body in favor of feeling just a bit better about it.

Fighting for inclusivity can also help on both a micro and macro level, though. Even within the plus size community online, Yeboah feels that there still exists quite a bit of stigmatization. "While body/fat positivity have come leaps and bounds in trying to gain equality and sizes for all, it's often the case that the perspectives and opinions of white, cis, conventionally attractive hourglass-shaped women are seen as paramount," she says. "We need to work hard as a community to show how diverse our bodies are in body shape, race, and body ability."

The more we fight for the celebration of diversity and aesthetic individuality, the more we'll hopefully see images of people who look like us start to creep up in the world around us. In turn, the less flawed and overlooked we might feel.

This will all take a while, but change perhaps begins with throwing the apology aside. "Never apologize for being born in the skin you're in," Yeboah says. "You deserve to be here. You deserve love. And you deserve to pursue whatever dreams and passions you have. Do not let the mainstream media or nasty people make you feel bad about your body. It has worked hard to get you where you are today and the last thing it needs is for you to abuse it emotionally or physically."

Not-apologizing might mean teaming up with radical body politics activists online, posting a stretch mark-baring photo on Instagram, or parading around your home in the comfort of a sports bra while growing used to the site of your body and all its alleged imperfections as you listen to girl power pop like early millennium Avril Lavigne. The choice is yours for the taking.