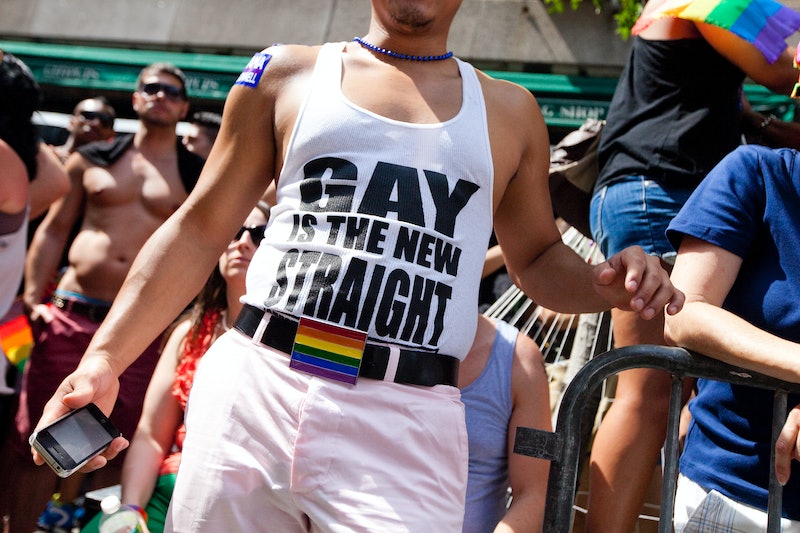 Boston's Pride parade will apparently have some competition from a few heterosexual bros who feel left out of the LGBTQ community's annual celebration. A Boston "Straight Pride Parade" is in the works for the end of August, and even plenty of straight people seem annoyed about it. The Washington Post reported Tuesday that organizers are moving forward with plans, including a newly designed flag and Brad Pitt as a mascot — despite the fact that they don't yet have a permit from the city.

What Is All This About?

Three men seem to be behind the push to organize the event under the auspices of the group Super Happy Fun America, whose website includes the slogan "It's great to be straight."

According to a public Facebook post by organizer Mark Sahady, the group's vice president, the event is tentatively scheduled for Aug. 31.

"It looks like the Boston Straight Pride Parade will happen," Sahady wrote. "We filed a discrimination complaint and it appears the City of Boston understands they would lose in litigation."

He said that the event is a "chance to have a patriotic parade in Boston as we celebrate straight pride."

Sahady added to the reasons for the event in a comment on the post, among them "poking fun at identity politics of the left" and freedom of speech.

"If you get victim status then you are entitled to celebrate yourself and expect those with oppressor status to defer to your feelings," Sahady wrote. "We are going to change all of that by using their language against them."

How Are People Responding To It?

Leaders in the LGBTQ community seem to be focused on the city's Boston Pride. Straight people are welcome to attend, too.

"We know that straight allies of the LGBTQ community are among the thousands of supporters who come out every year to march, observe and celebrate," Linda DeMarco, president of Boston Pride, said in a statement to The Post.

"We are looking forward to seeing our straight friends, family, and neighbors at the Boston Pride parade and festival this Saturday along with members of the LGBTQ community," she added.

LGBTQ activist and actor George Takei pointed out the irony on Twitter by comparing the event to the Stonewall uprising, which Pride events commemorate. His tongue-in-cheek post said that the organizers are planning the parade "presumably to commemorate that historic moment when courageous heterosexual frat bros finally stood up to the gay cops who had been harassing and arresting them for decades."

Straight people actually seem among those most annoyed — including the group Smash Mouth, which expressed their dismay with an expletive. Author and motivational speaker James Fell wrote on Facebook that he's never had to struggle against discrimination for being straight.

"And therefore, there isn't any reason to take pride in it," Fell wrote. "Grateful for the privileges I get? Sure. But pride? I don't see it."

"What I do see is that this parade is misnamed," Fell continued. "It's not a 'Straight Pride Parade.' It should be called a 'I'm a homophobic piece of sh*t' parade."

Is It Actually Going To Happen?

The big question now seems to be whether or not the City of Boston will approve a permit for the event. On the group's website, no date is mentioned for the parade, and it says that the "event is pending approval from the City of Boston." According to the local CBS affiliate, the group has been in touch about the event but has not received a permit yet.

Mayor Marty Walsh has not specifically addressed the "straight pride" event, but did issue a statement in support of LGBTQ Pride activities.

"Every year Boston hosts our annual Pride Week, where our city comes together to celebrate the diversity, strength and acceptance of our LGBTQ community," Walsh said in a statement, as quoted by USA Today. "This is a special week that represents Boston’s values of love and inclusion, which are unwavering. I encourage everyone to join us in celebration this Saturday for the Pride Parade and in the fight for progress and equality for all."