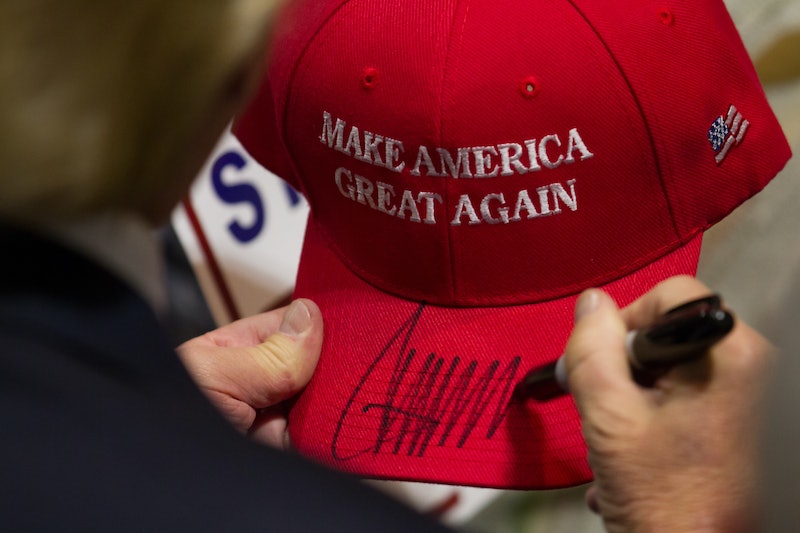 When police in Massachusetts arrested a woman for allegedly assaulting a man over his "Make America Great Again" hat earlier this month, she was charged with disorderly conduct as well as simple assault and battery. Now, however, the Brazilian woman faces possible deportation after Immigration and Customs Enforcement (ICE) agents somehow got wind of her case.

According to The Washington Post, 41-year-old Rosiane Santos was arrested Feb. 15 by Falmouth Police after allegedly attempting to repeatedly swat at a MAGA hat off a man's head while he was eating at Casa Vallarta Mexican Restaurant in Falmouth, Massachusetts. Video of the incident initially posted to Facebook by the man Santos allegedly attacked has since been taken down. A report from the Falmouth Police Department stated that Santos, who was reportedly born in Brazil, told officers she didn't think the man should be allowed inside a Mexican eatery while wearing a clothing item supporting President Donald Trump's popular slogan. Bustle has reached out to both ICE and Santos' attorney for comment.

Although Falmouth Police released Santos on a $40 bail, she was later picked up by a different law enforcement agency. According to The Washington Post, ICE's fugitive-operations team detained Santos on Tuesday, entering her into removal proceedings in federal immigration court. ICE spokesperson John Mohan told NBC News that Santos was "an unlawfully present citizen of Brazil." Santos has since been released from ICE custody and given notice to appear in court at a future date.

"Santos is currently facing local charges for assault and other offenses," an ICE spokesperson told ABC News in a statement. "She has since been released from ICE custody after being entered into removal proceedings in federal immigration court and provided a Notice to Appear at a future date before an immigration court."

It's unclear how ICE became aware of Santos' status, as Falmouth Police told The Washington Post they weren't aware of her immigration status at the time of her arrest and thus did not alert ICE to her arrest or the charges against her. The federal law enforcement agency did not immediately respond to Bustle's request for comment, although a spokesperson told The Washington Post the agency "does not publicly discuss intelligence and research tools and methods" used by their agents and officers.

In a statement to Boston.com, an attorney representing Santos said she was married to a U.S. citizen and had a green card application pending. Santos' attorney told the newspaper that because of she was arrested and detained by ICE, her case and pending green card application will, instead of being handled by U.S. Citizenship and Immigration Services, be brought before an immigration judge. Santos' attorney described this as "the only change this arrest has cost Rosiane in terms of her immigration" in a statement to Boston.com.

Since Trump's election victory in 2016, MAGA hats have, along with other pro-Trump paraphernalia, increasingly become catalysts for conflict. In May, a man wearing a MAGA hat was reportedly mocked and intimidated by employees at a Miami location of The Cheesecake Factory while in July, a teenager allegedly had a cup of soda poured on him and his MAGA hat taken while eating out in Texas.