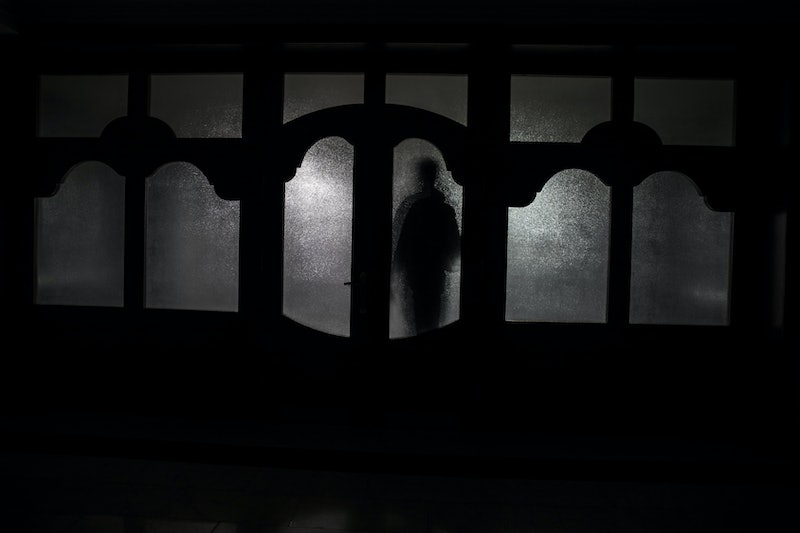 I, uh, don’t really know how to ease into this one gently, so I’ll just launch straight into it and hope for the best: Residents of the Bramford Road area of Ipswich, UK have been terrorized for months by the sound of a child singing the nursery rhyme “It’s Raining, It’s Pouring” in the middle of the night — and even though the mystery has now been solved, the explanation for the spooky sound reaches a whole new level of “NOPE.” The good news is the nursery rhyme wasn’t the product of a lost ghost wandering the fields of Ipswich. The bad news, however, is that it was caused by spiders.

Talk about nightmare fuel, am I right?

Ipswich residents first began hearing the eerie music in September of 2017, according to the Independent. (That’s right: They've been living with it for almost an entire year.) “It was waking me up in the night, it was absolutely terrifying,” one woman told the Ipswich Star on Sept. 12. “I heard it at all times of the night — 1 a.m., 2 a.m., 4 a.m. — it was sporadic, sometimes it would play once, other times it was over and over. Last week it played for hours, it was just horrible.” Resident Alice Randle (who may or may not also be the woman interviewed in the Ipswich Star — it's not totally clear) described the singing to the Independent as “very haunting”; other neighbors, meanwhile, said it was “like something out of Freddy Krueger.”

And, I mean… they’re not wrong:

Compare that iconic moment in the Nightmare on Elm Street franchise with this delightful little video someone made in the aftermath of this story breaking, and, well…

Anyway, after putting up with this nonsense for 10 months, Randle called the Ipswich Borough Council and asked them to do something about the issue, reported the Independent. Thankfully, they took her complaint seriously; said a spokesperson for the council to the Ipswich Star, “This is unique in our experience — it was difficult to believe a nursery rhyme would be playing in the middle of the night. But we do take all complaints extremely seriously and asked the residents who contacted us to let us know when it was actually playing so we could investigate properly.”

“But, wait,” you might be wondering, “what do spiders have to do with it?” I’m glad you asked! And I’m even gladder to report that the spiders themselves were not singing the song. It turns out that the song wasn’t even being sung live at all; the council discovered that it was recording being piped through a loudspeaker at a nearby warehouse. This recording you see, was an alarm — a motion-activated one intended to deter intruders.

The spiders were setting off the alarm when they scuttled across the sensors.

It actually took the Ipswich Borough Council a few tries to identify the source of the sound; according to the Independent, they drove out to investigate several times following calls reporting the noise, only to have it cease before they actually arrived. On Sept. 10, though, they finally found the alarm system — and they discovered that every time a spider wandered across the CCTV, it set off the song, reported the BBC.

The council subsequently got in contact with the property owners, who have confirmed to the media that the noise was the alarm system. “The sound is only supposed to act as a deterrent for opportunistic thieves that come onto our property, and it’s designed only to be heard by people on our private land,” a spokesperson for the site said to the Ipswich Star. “We are now aware of the problem — the motion sensors were being triggered by spiders crawling across the lenses of our cameras and it looks like we’ve had it turned up too loudly. We’ve spoken to the resident who brought it to our attention and adjusted it so this shouldn’t happen again.”

So, I mean, hey, at least the complaint was taken seriously, the cause of the creepy sound identified, and the problem dealt with by the responsible parties. That’s excellent — well done, everyone.

But I, uh, still have a lot of questions about the alarm itself. I understand wanting to set up some sort of alarm system which will make loud noises when triggered as a preventive measure; that makes sense. But… what was the meeting about this one like? How does one go from the perfectly reasonable standpoint of, “Let us set up an alarm that will startle intruders, thereby protecting our warehouse from thieves,” to, “Let us set up an alarm that sounds like a creepy child singing a nursery rhyme alone at a deserted industrial park in the dead of night to scare intruders so badly they will never, ever come back”? That seems perhaps a bit… excessive, no?

Then again, I am not terribly familiar with that area of Ipswich, so maybe it makes perfect sense.

Oh, and just in case this whole story wasn’t already horrifying enough, it gets even worse if you dig into the specific nursery rhyme at the center of it all.

“It’s Raining, It’s Pouring” has a somewhat hazy history; we’re not totally sure how old it is or where it comes from, but we do know that one of the earliest records we have of it occurred in the 1910s: The first two lines were printed in The Little Mother Goose, a collection of the Mother Goose illustrations Jessie Willcox Smith originally created for Good Housekeeping which Dodd, Mead, and Co. published as a book in 1914.

But the history of the rhyme isn’t what I want to draw attention to here. What I want to focus in on is one particular interpretation of the rhyme. Consider the full poem, which may read either:

He went to bed and bumped his head

And couldn’t get up in the morning.”

He bumped his head and went to bed

And couldn’t get up in the morning.”

The order in which the two main events of the rhyme occur matters — that is, it’s significant whether the old man bumped his head first, then went to bed, or if it happened the other way around. Why? Because some folks believe that the rhyme describes the old man falling into a coma or dying due to a blow to the head.

In the article “Head Injuries in Nursery Rhymes: Evidence of a Dangerous Subtext in Children’s Literature,” which was published in the journal CMAJ in 2003, Sarah M. Giles and Sarah Shea note the following:

“Obviously, establishing the exact sequence of events is crucial to the creation of a differential diagnosis. If the elderly gentleman bumped his head after retiring for the evening, one is forced to entertain potential foul play, seizure activity or even a postcoital MI (there is no evidence to confirm the commonly held belief that he was alone). Also, it should be noted that he was ‘snoring.’ Could his death have been precipitated by severe obstructive sleep apnea? If he actually bumped his head before going to sleep, the list of potential mechanisms is endless, and a good forensic investigation is required to determine the cause of death.”

So, within the context of the Ipswich story, what we’re really looking at here is a whole bunch of people being menaced by an infestation of spiders who have gained the ability to play a song sung by a creepy child about a man dying of blunt force trauma, late at night, over and over again, for nearly an entire year.

Good night, Ipswich. Sleep tight. And whatever you do…

More like this
This Creepy TikTok Trend Encourages Out-Of-Body Experiences
By Kaitlyn Wylde
What Is The Forest Personality Test? The TikTok Trend, Explained
By Georgina Lawton
Myra Magdalen Is TikTok’s Queen Of Chaotic Maximalist Fashion
By Sophia Moore
RushTok 2022 Is Here & TikTok Is Just As Obsessed As Last Year
By Sarah Ellis
Get Even More From Bustle — Sign Up For The Newsletter