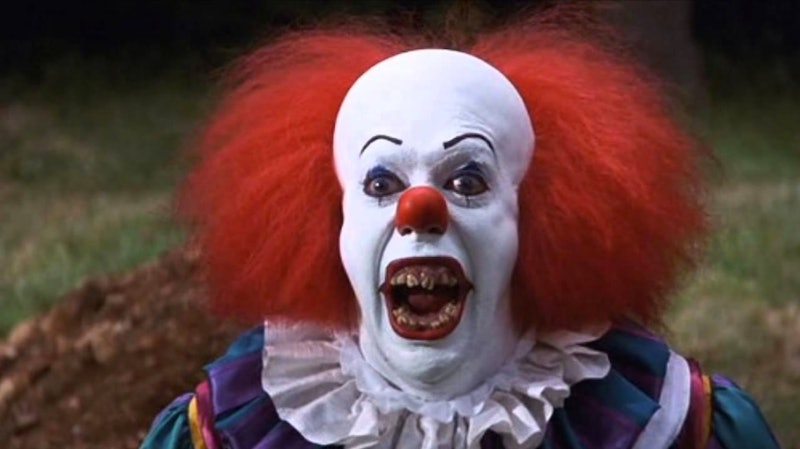 The '90s were the greatest time to be a kid. No one else can say they lived the best years of Lisa Frank, Barbie dolls, and fast food toys. But it wasn't all rainbows and butterflies; our childhoods also brought us pieces of '90s nightmare fuel that still haunt us to this very day. TV Tropes describes nightmare fuel as "stuff so horrifying that it can give people the creeps for years." Sure, the Goosebumps stories gave us the heebie jeebies. But I'm talking about the stuff that still messes with our heads. For instance, I watched The Haunting long before my eyes were ready, and I honestly can't watch it as an adult. Wood carvings of little kids coming to life and begging for help? Thank you, but no.

We've all got something. If it's not The Haunting, maybe it's the scene where Simba's dad dies. Or Cruella de Vil's horrible driving skills when she's trying to catch the dalmatians. Or the episode of Are You Afraid of the Dark? with the possessed camera that takes pictures on its own. Or maybe it's another one of these nine pieces of '90s nightmare fuel that I almost couldn't write about. I'm going to go hide under the covers now. K, bye.

1. The Tunnel In Willy Wonka And The Chocolate Factory

All of the visitors of the chocolate factory are taking a leisurely ride on the boat to their next destination... except it turns into a scene that will haunt my nightmares for decades to come. They enter a dark tunnel and everything turns into one giant anxiety attack. The Oompa Loompas are rowing furiously, and Wonka starts acting even weirder than he already is. Strange shadows dance around, colors flash, and gruesome images of bugs play on the walls. What's worse than bugs? Nothing. Nothing.

Then Wonka starts singing, and I'm all #NopeBye. The boat picks up speed even more, with the passengers begging for it all to end. And in the blink of an eye, it does. All goes silent, and they're at their next destination.

This was scary in the sense that it played with your mind. It wasn't blood and guts, and it wasn't something jumping out at you from behind a corner. It was a scenario where everyone was horribly uncomfortable and totally vulnerable almost to the point of no return, and then BAM — it's over.

2. The Reveal Of The Grand High Witch

In this scene from The Witches, when the Grand High Witch starts to peel her face off, you know something gross is about to go down; but I think most of us underestimated just how nasty it would be. The sound of her fake human skin peeling off is like nails on a chalkboard, except entirely worse; and as soon as her hideous face is free, her nose and chin begin to grow. She removes her wig for the final reveal — something none of our preciously innocent eyes were ready to see. She's covered in wiry hair and warts, her fingers are long and pointy, and she has these scary little eyes that light up purple when she blows up another witch who dared to disagree with her. The cherry on top is how during the entire scene, she's demanding that every child be destroyed.

I know they say don't judge a book by its cover, but in this case, judge away.

Back in the day, when Michael Keaton was still Batman (<3), movie producers sat around a table brainstorming ways to utterly destroy the childhood of '90s youth. And so, there was the Penguin's death scene. He's already terrifying looking to begin with; but throw in the green goo coming out of his nose and mouth, his raspy voice, and the way the equally creepy penguins drag him into the water after he's taken his last breath, and you've got a tall glass of NOPE.

All right, I get it. Are You Afraid Of The Dark? was obviously supposed to scare us. But this specific episode scared us and effectively ruined any chance we ever had of enjoying spending time in a body of water. Sweet little Zeke and Clorice find a mysterious, abandoned swimming pool in their school, which should be cause for celebration. Pool parties, for the win!

But they later learn that it was previously a cemetery; and when the bodies were removed to make way for the pool, they just forgot one and left it behind. Oh! OK! NO BIG DEAL, GUYS. Although the episode ends with the dead man finally dying (but for real this time), the damage has been done. Anytime I'm in a pool and I even think I've felt something touch my foot, that's it. I'm done. I'm out. Give me my towel. Dry land awaits.

This flick was total nightmare fuel because for a moment there — and don't deny it — we all thought it was a documentary about three student filmmakers who disappeared while making their own documentary about the legend of the Blair Witch. It was presented and marketed as a real documentary, further fueling the fear. I vividly remember watching this movie with my friends after we were all told not to, and how we were all too scared to go into the woods after that. It was later discovered that the film was just another work of fiction. I'm 28 years old, and let me tell you something: I don't care what anyone says. The Blair Witch is real, she's hiding in the forest, and she can probably sense me talking about her right now.

Everyone knows that clowns are horrifying, and I'm 99.99 percent sure it started with Pennywise. Not even Ronald McDonald stands a chance after you've seen this guy. Pennywise could've chosen to just be a regular clown who makes balloon animals and stuff, but no. He's a demonic clown that preys upon the local children through shapeshifting and possession. No one is safe. Not the kids. Not the balloon animals.

7. Every Single Detail From The Sixth Sense

Sweet little Haley Joel Osment! This is going to be a cute movie about an adorable little child psychic, right? LOL. No. HJO sees dead people, and I'm not talking about Casper the friendly ghost. I'm talking a cyclist who got hit by a car and a woman who died in a fire and Mischa Barton puking under the bed. Then at the end, we find out the truth about Bruce Willis, and basically lose hope in everything in life.

Had the star of this movie been a grown adult, I think the effect would've been different — and honestly, probably less scary. But center the story around a precious boy who can see dead people, and it had all of us kids wondering if we'd see dead people. Life wasn't all Beanie Babies and Dunkaroos for this '90s youngster. Talk about a tough upbringing. If you need me, I'll be hiding in the corner playing with my Barbies.

8. The Library Ghost From Ghostbusters

This is the first ghost that the Ghostbusters encounter — and what a way to start a new job. She first appears to them as this harmless, old-fashioned, inconspicuous librarian (Eleanor Twitty). But don't get too comfy, because she suddenly turns into this terrifying thing with giant teeth and holes for eyes and I just can't deal. Her quick transformation makes for one of the most startling surprises of the film. Tell me again how this was rated PG!?

And here's a fun fact: Initially, the film crew built a library ghost puppet, but they decided it was too scary. I can't imagine how it could get any worse than the ghost they went with, and I honestly don't even want to try.

9. The Flying Monkeys In The Wizard Of Oz

The Wicked Witch of the West was supposed to be the scariest character in this iconic film; but I think plenty of '90s kids would agree that it was her flying monkeys that gave us nightmares. I'm not sure if it makes it better or worse that they were played by real people — because what in God's name did the make-up crew do to their faces?

The most terrifying scene, however, is when the Wicked Witch sends all of her monkeys to capture Dorothy. Hundreds of them take to the sky, making this awful whistling noise as they fly through the air. Then they swoop up Dorothy — and Toto, which just makes matters 10 times worse. In reality, this scene was filmed with a few hundred tiny monkey figurines that were but a couple inches in length, suspended from wire. That doesn't make me feel any better.