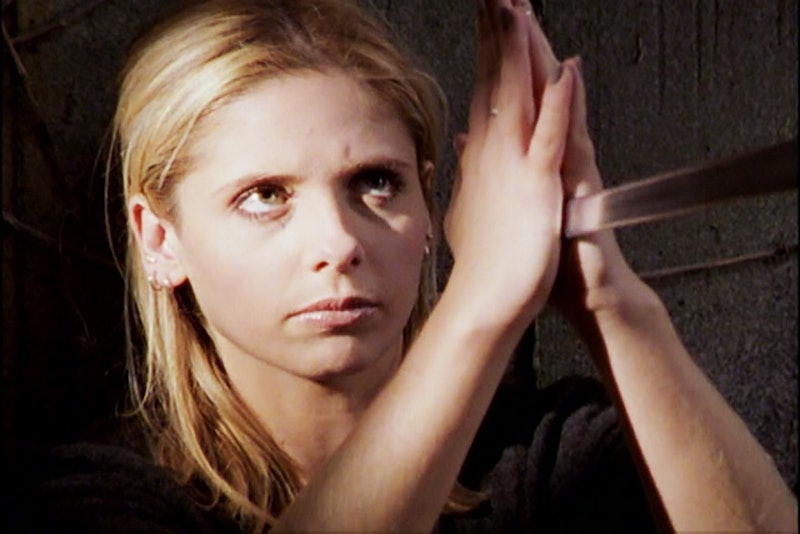 During Buffy the Vampire Slayer's original run, the titular character was known to resurrect from the dead from time to time. But should the whole series have a second life? According to Deadline, Fox Chairman and CEO Gary Newman said Fox wants a Buffy the Vampire Slayer reboot, and is only waiting for the green light from series creator Joss Whedon.

Deadline reports that Newman, while at the INTV conference in Jerusalem, said "[Buffy the Vampire Slayer] is probably the most ripe show we have for bringing back." He added, "It’s something we talk about frequently. Joss Whedon is one of the greatest creators we’ve ever worked for. When Joss decides it’s time, we’ll do it."

While Whedon brought many cultishly adored titles — Firefly, Angel, Dollhouse, and Dr. Horrible's Sing-Along Blog — to life, it seems like risky business bringing back one of the most beloved shows of the late '90s and early aughts. It was unclear from Newman's statement if the network wanted to reboot the concept with a new young cast or to pick up with the original Scooby Gang some 15 years after the 2003 finale, but, either way, the charms of the teen supernatural series could turn to dust in the light of modern day.

Let's first look to the case for why they shouldn't reboot with a new gang. Like many Buffy fans, I'm in the camp that believes the drama was absolutely perfect in every way. Well, mostly. It had funny dialogue, snappy pop-culture references, a stable of memorable characters, some romantic and sexy moments, and, most importantly, a feminist hero at its heart that could kick the butt of nearly any man (or demon) she came across.

But let's be real — there were definitely some plot lines that could have been thrown out or better handled (remember when Spike attempted to rape Buffy?). Still, the moments where it faltered were saved by the characters. The core group of friends Buffy, Willow, Xander, and Giles as played by Sarah Michelle Gellar, Alyson Hannigan, Nicholas Brendon, and Anthony Stewart Head, had sublime chemistry. Supporting cast members, particularly Tara (Amber Benson), Spike (James Marsters), Angel (David Boreanaz), Cordelia (Charisma Carpenter), and Anya (Emma Caulfield) fit in perfectly with the show.

It seems wild to believe we'd get the same magic twice, and that's a a lot of expectation to put on any young cast.

But just because the original players were amazing doesn't mean they need to reunite. Let's say the reboot does pick up where the series finale left off just a few years later. Maybe the Hellmouth has somehow reopened in Sunnyvale. That means we may have to contend with some of the dynamics at play in the last season of the series, which in many fans' opinion, was one of the weakest (though not the weakest). In the final episodes, however, the close relationships of the Scoobies took a back seat to the show's complicated mythology and the search for a new Slayer.

Even if the show does avoid this pitfall by falling into some sort of alternative universe, the same themes might not work with all the characters older. Unlike The X-Files, which has had a pretty successful return on Fox, Buffy was about more than the supernatural story-of-the-week series with a mysterious mythology. The show was also a coming-of-age tale, with the characters each on their path to self-discovery. The process of learning new things about yourself doesn't stop at college, but it would cast a dark light on the original show if none of the Scoobies had their lives and relationships in a good place as they approached 40.

When the news broke, many fans weren't enthused, to say the least.

Of course, there are many ways that a reboot could go right. But it's safe to say that the generation that grew up with Buffy may not accept a revival as readily as they accepted the original show.