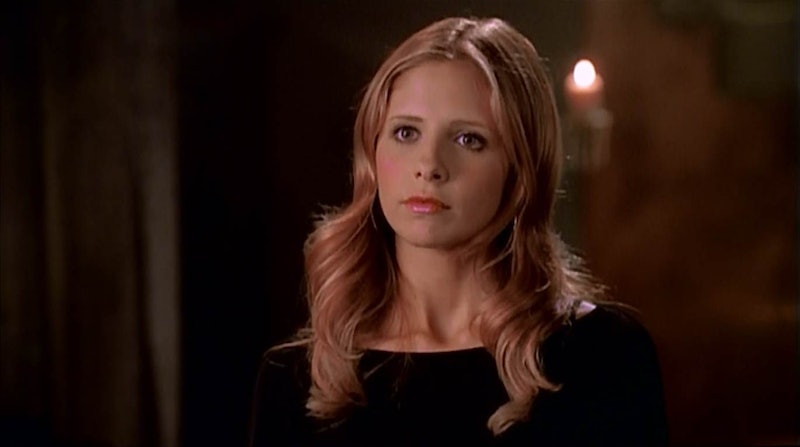 When, on Sunday, I read Kai Cole's essay for The Wrap alleging that her ex-husband Joss Whedon is a feminist "hypocrite" who's had multiple affairs with female employees, I wasn't surprised. Most Whedon fans have heard past rumors that his real-life persona doesn't always align with his pro-women TV shows (not to mention that cringe-y Wonder Woman script he allegedly wrote) so these latest claims aren't shocking. That doesn't mean they aren't still disappointing, though. After all, Whedon made the brilliant Buffy the Vampire Slayer, a show many people credit with developing their feminism. It's difficult, now, to separate the series' triumphs from the flaws of its creator — but that doesn't mean we shouldn't try.

To reconcile the claims against Whedon with our love for shows like Buffy, we must remember that he wasn't the only person involved with these series. There were many other people who worked on those shows alongside him, and who don't deserve the legacy of their work to be tarnished by the alleged actions of one man.

Still, it's hard not to be upset by the claims against Whedon. In Cole's piece, she claims that her ex had several affairs over the course of their 16-year marriage with his "actresses, co-workers, fans and friends." According to Cole, Whedon explained his alleged actions by telling her, "When I was running Buffy, I was surrounded by beautiful, needy, aggressive young women. It felt like I had a disease, like something from a Greek myth. Suddenly I am a powerful producer and the world is laid out at my feet and I can’t touch it.”

Later, he allegedly said, "In many ways I was the HEIGHT of normal, in this culture. We’re taught to be providers and companions and at the same time, to conquer and acquire — specifically sexually — and I was pulling off both!” (In response, Whedon's rep told The Wrap that “While this account includes inaccuracies and misrepresentations which can be harmful to their family, Joss is not commenting, out of concern for his children and out of respect for his ex-wife.”)

Whedon's alleged infidelity is disappointing, of course; no one wants to think of a beloved icon as being anything but perfect. But that alone wouldn't have fans up in arms — we're all aware that even celebrities' marriages aren't immune to failure. It's the filmmaker's alleged reasoning for his actions that are so upsetting. Cole's account of Whedon's comments implies that Whedon's alleged cheating wasn't his fault, but that of both the "needy, aggressive" women he worked with and society as a whole. The comments, if true, paint him as a victim in this situation, just a powerful man incapable of resisting the traps set out for him by the rest of the world. And fans, rightfully, are heartbroken, with some saying that the claims are affecting how they view Whedon's work and creations. Additionally, the popular fan site Whedonesque, a tribute to the filmmaker, has disbanded following Cole's post (although the owners haven't said if her claims are the reasons).

Knowing that Whedon, the creator of some of the most feminist work TV has ever seen, may believe this is infuriating; for many women, Cole's claims about the filmmaker might make them wonder if they can ever view shows like Buffy and Dollhouse the same way. How could the person responsible for barrier-breaking characters like Buffy, Faith, and Willow allegedly be so hypocritical in his own feminism? Did Whedon really believe in the power and agenda he gave his female characters, or was it all just pretend?

These questions are understandable, and not unprecedented. When the allegations against Bill Cosby, Johnny Depp, Woody Allen and more came into light, many of us wondered whether we could ever view their work the same. But this situation feels different, due to the feminist nature of Whedon's work. His alleged hypocrisy makes fans — especially women — feel lied to and wronged, and like the pro-women themes of his shows weren't actually made with those intentions. Despite that, though, I believe we shouldn't dismiss a show like Buffy just because of the alleged behavior of its creator. Whedon may, indeed, be problematic, but it'd be a major disservice to the many other people involved in his work if we let his alleged actions taint our views of the projects they all helped create.

For one thing, Whedon may have been Buffy's creator and showrunner (for the first five seasons), but he was far from the only person involved in its formation. There was Marti Noxon, the writer and executive producer who engineered groundbreaking moments like the introduction of Tara, a gay woman; Jane Espenson, another writer and producer responsible for crucial episodes involving suicide, grief, and mental illness; Drew Goddard, who went on to write for female-centric shows like Alias and The Good Place; Rebecca Rand Kirshner, a writer behind many memorable episodes who'd later executive produce Gilmore Girls; and many others. There's no doubt that Whedon had a major say in Buffy's voice and mission, but so did plenty of other people, and they don't deserve for their work to be second-guessed because of one person's alleged actions.

Acknowledging the others involved is just the start, though. We can separate Whedon from the feminist legacy of his shows by, simply, taking him out of the equation. Yes, Whedon created Buffy, but going forward, let's focus less on his involvement and more on the importance of his shows. We don't need to treat him as an idol and dissect his every move; instead, we can transfer that passion and the community it created to his work, by coming together to celebrates the characters, plotlines, and themes, not the man at their helm.

Of course, that's easier said than done. Whedon is a hugely influential man who may have abused his power, and may not be nearly as feminist as the beloved characters and projects he helped create. But it's unfair to the other people involved in Buffy, Angel, Firefly and to women like ourselves, who were changed by characters such as Buffy Summers, if we let these allegations dictate how we view the quality or legacy of all their work. And there's also no need for us to let that happen.

Whedon's alleged affairs or harmful words towards his ex-wife don't take away from the importance of Buffy featuring the first lesbian sex scene on network TV, for instance, or the value of Dollhouse having an anti-heroine for the ages. We can still enjoy Whedon's work, without focusing on him as the creator.

So be upset by these allegations all you want. As fans and critics, we have a right to be angry that we can't always count on the men of Hollywood to be as pro-women as the projects they support. But remember: one guy's actions shouldn't discount the legacy of an entire on-screen world, or the contributions of the many other people who helped that world get made, or the very real effects characters like Buffy have on women all over the world. Buffy, Dollhouse, and the rest remain feminist victories, no matter the alleged behavior of the man who ushered them into existence.