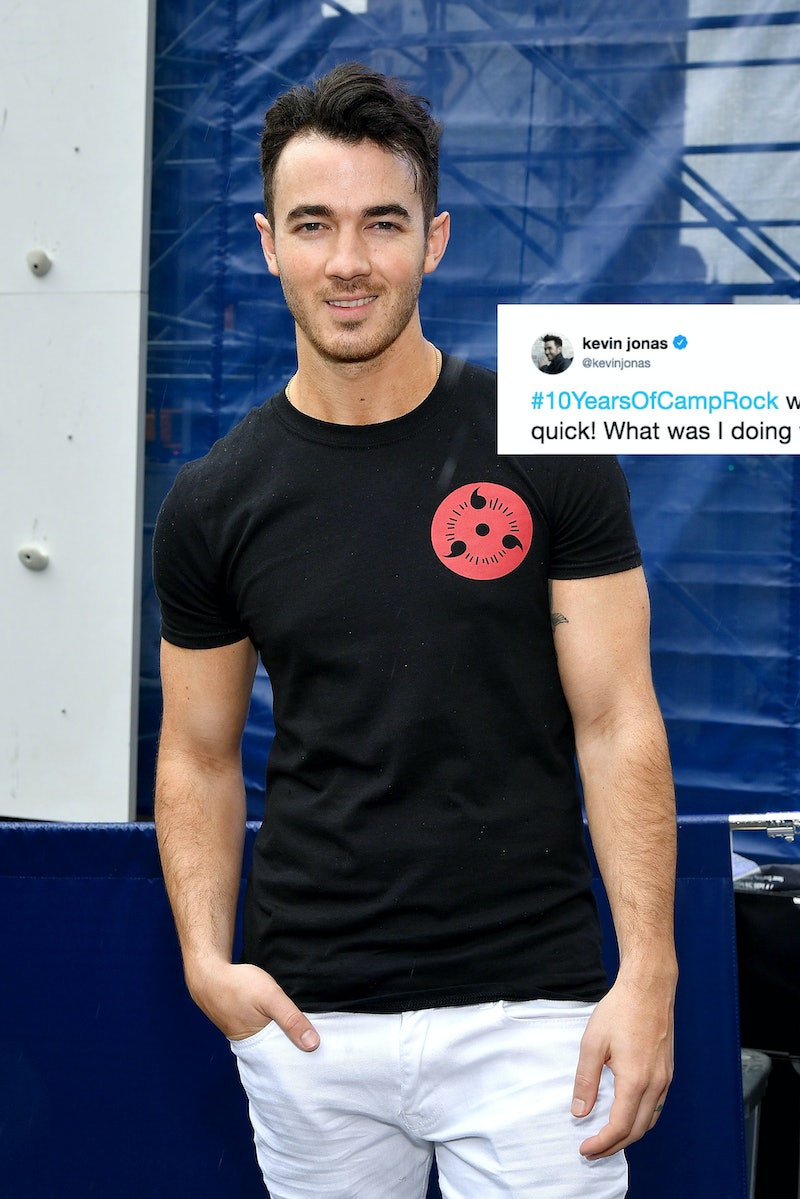 Could Connect 3 be getting back together? In an interview with E! News published Wednesday, June 20, on the tenth anniversary of Camp Rock, one of the film's stars, Kevin Jonas, teased a possible Camp Rock reunion movie, but it's safe to say it probably wouldn't air on Disney Channel.

"Never say never," Kevin told E! at Marshalls' Father's Day event in New York City, "We talked about it for a minute, doing something ridiculous like an R-rated version now in our life, like a going back to camp kind of thing." An R-rated Camp Rock seems pretty far-fetched, but Jonas said that regardless of the rating, a Camp Rock 3 movie has not been ruled out entirely. Speaking of the real possibility of a third Camp Rock film, Jonas added that he would "definitely consider it," but that "it just has to be the right thing."

News that Camp Rock was celebrating its tenth anniversary took Jonas — who played Jason Gray, the eldest of the brotherly trio Connect 3 (a fictional stand in for the real life Jonas Brothers) — by surprise. He told E!, "I can't believe 10 years has actually passed. It makes me feel like I'm getting old."

The Disney Channel Original Movie musical, which premiered in 2008, followed aspiring singer Mitchie Torres, played by Demi Lovato, as she goes to a prestigious music camp, where she hones her talent and ends up meeting dreamy pop star Shane Gray, played by Joe Jonas. The film, which also spawned the 2010 sequel, Camp Rock 2: The Final Jam, turned 10 years old on Wedesday, and Jonas and many of his castmates took to social media to celebrate the milestone.

Joe tweeted, "10 years of Camp Rock and I’m still bitter we lost," and when one fan pointed out that he was referencing a part of the second movie, the DNCE singer replied, "I know Dani. But Shane Grey never forgets where he came from #stillbitter #theogmrgreywillseeyounow".

Kevin looked back less-than-fondly on his hairstyle in the movie, writing, "#10YearsOfCampRock well that went by quick! What was I doing with my hair...." Meanwhile Anna Perez de Tagle, who played Ella Pador, dubbed her character "the original Queen of Clapbacks," along with a clip from the film, and voiced her disbelief at how much time had passed.

The movie's fans also took to Twitter to commemorate the anniversary. @ashlynjmcatee tweeted, "HAPPY 10 YEAR ANNIVERSARY TO ONE OF THE BEST DISNEY CHANNEL MOVIES, CAMP ROCK," with some microphone emojis, and @bigvivvy69 said, "Today is the 10 year anniversary of Camp Rock so you can find me cry singing along to the entire soundtrack".

While nothing is officially in the works, Kevin Jonas is not the only Jonas Brother who would be open to Camp Rock 3. Joe told Marie Claire in March 2017 that he would be up for doing a more mature version of the movie-musical as well. "If it made sense, sure," he told the magazine. "For all of us — Demi, Nick, it would be funny to do a spin on it. Do the graduating days, make it kinda dark. An adult film."

"Well, not an adult film," Joe clarified. "An R-rated film. We've joked around about the idea a couple times." He also posted a photo on Instagram with Lovato in February 2017 with the caption, "CR3?" After his Instagram post, Lovato herself commented on the rumors of a Camp Rock 3, putting her support behind a more adult version of the DCOM classic. "We want to come out with an R-Rated Camp Rock 3," she said during an April 2017 appearance on The Ellen DeGeneres Show, as reported by Teen Vogue. "I mean all of our fans have now grown up and so anybody that watched Camp Rock is now older and can appreciate it."

With major reboots and revivals happening left and right, it's not hard to imagine the cast reuniting for a third film, but for now, fans will have to settle for rewatching the first two. Please excuse us while we hum "This Is Me" to ourselves all day long.

More like this
Lindsay Lohan Just Recalled A Hilarious 'Parent Trap' Story
By Sam Ramsden
The 'Love, Lizzo' Harry Styles Scene Is Just 1 Moment That Made Fans Feel Seen
By Brad Witter
Will Smith Reflects On "Horrific" Chris Rock Oscars Slap In First TV Interview
By Sam Ramsden
Idris Elba "Breaks Out" Of London In 'Luther' Film First Look
By Sam Ramsden
Get Even More From Bustle — Sign Up For The Newsletter