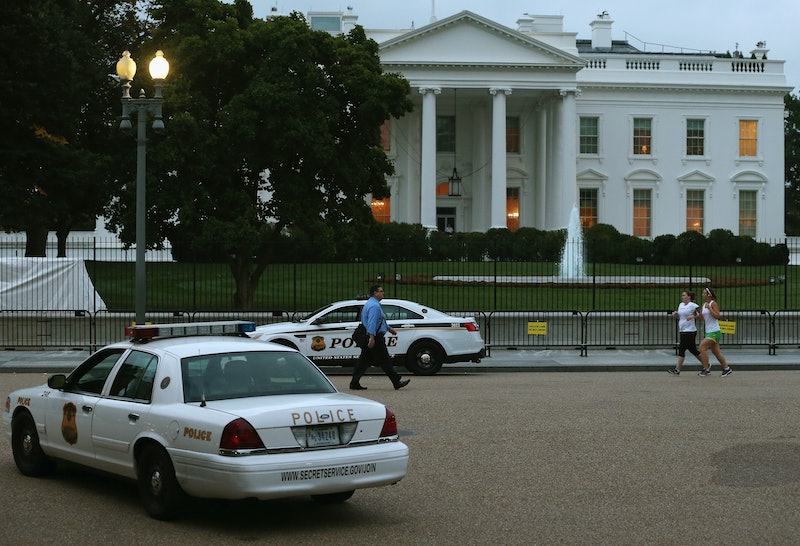 According to various reports, a Canadian man trespassed at the White House on Wednesday, accessing a restricted area and telling Secret Service agents that he wanted President Trump's help finding a wife. The man reportedly had two bottles of Crowne Royale that he planned on giving Trump, and was arrested.

In arrest documents obtained by NBC 4 reporter Scott MacFarlane, the man, identified as Yianny Georgopoulos, was accused of entering a restricted area by moving a security barrier. He was subsequently arrested and charged with unlawful entry. Bustle has reached out to the White House for comment.

According to the arrest documents, Georgopoulos said in a post-arrest interview with the Secret Service that he'd come to the United States to speak with Trump because "he wanted help from the President to find a wife." The documents also say that Georgopoulos acknowledged that he'd been arrested previously for "threatening family members," and that he had stalked a cousin of his; it's unclear when or where these alleged incidents transpired, or if they were in any way related to his arrival at the White House.

Trump has had three wives; however, he's said that he does not drink alcohol.

"Uniformed Division personnel arrested an individual after he attempted to move a security barrier (sidewalk bicycle rack) and enter a secure area in the vicinity of East Executive and Pennsylvania Avenue," a representative for the Secret Service tells Newsweek. "The individual was immediately apprehended following the attempted unlawful entry, and transported to MPDC 2D for processing. The incident resulted in no impact to White House operations."

It isn't uncommon for people to be arrested while attempting to access restricted areas on White House grounds. In June, a Bay Area man was scaled the White House fence and said that God told him to punch Trump in the face, while in 2014, a man who jumped the fence was able to enter White House itself and overpower a guard before finally being apprehended.

That latter incident, along with a string of other security breaches during the Obama administration, raised concerns about the Secret Service's competence, and ultimately led to the resignation of the agency's director in October 2014 . But in 2017, a White House fence jumper managed to roam around undetected for 17 minutes before agents approached him, officials said at the time. This prompted then-Rep. Jason Chaffetz to write a letter to the agency head questioning "whether the agency’s security protocols are adequate."

According to the arrest statement, the incident involving Georgopoulos unfolded shortly after midnight on Wednesday when he "approached a security barrier (a bike rack) that is marked 'NO TRESSPASSING [sic] AUTHORIZED PERSONNEL ONLY' and 'RESTRICTED AREA DO NOT ENTER,'" and physically moved it. He also reportedly told the Secret Service that he doesn't know when he'll return to Canada, where he lives, and in fact said that he "can't go home." He didn't elaborate on what he meant, however. He is charged with unlawful entry of public property.