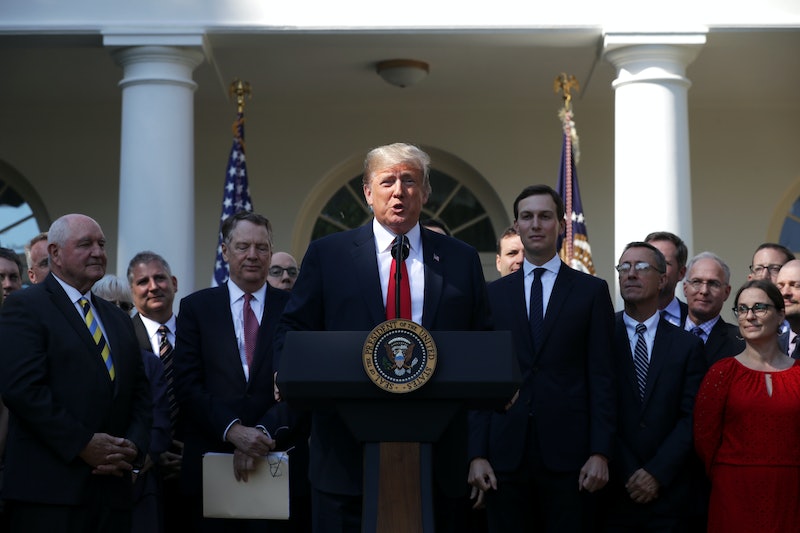 It's a known fact that the president doesn't drink or smoke. At a press conference on Monday, Trump reiterated that he doesn't drink alcohol, saying he'd be "the world's worst" if he consumed it.

The topic of alcohol came up when CNN's Kaitlan Collins asked the president about SCOTUS nominee Brett Kavanaugh's history of drinking and whether he lied about it under oath while testifying before the Senate Judiciary Committee on Thursday. Collins asked Trump if he would pull his support for Kavanaugh, to which Trump responded that he didn't believe the SCOTUS nominee lied. Trump then commented that he personally would be a "mess" if he drank.

"I'm not a drinker," Trump said. "I can honestly say I never had a beer in my life. It's one of my only good traits. I don't drink. Whenever they're looking for something, I say I never had a glass of alcohol."

"I never had a glass of alcohol," Trump reiterated. "I've never had alcohol ... Can you imagine if I had? What a mess I'd be. I would be the world's worst. I never drank, OK?" As he praised Kavanaugh, Trump said that there had apparently been no complaints about the SCOTUS nominee and his drinking habits "in many, many years."

The president's comments to the press came days after California professor Christine Blasey Ford and Kavanaugh appeared testified about her allegation of sexual assault against Kavanaugh. The SCOTUS nominee has categorically denied the accusation, calling it a "political hit" supposedly orchestrated by the Democratic Party.

Here's the CNN clip of the president's comments about drinking.

The president also brought up his own time in high school. He said that he would see his peers consume alcohol while he would never participate in it. These students, he said, would "drink beer and they'd go crazy and you know, they were in high school!" But he added that such habits, in one's youth, should not inhibit them from making something out of their lives when they've become adults. "Does that mean that they can't do something that they want to do with their lives? So it's a very tough thing," he said.

Recently, Trump made news after he was photographed drinking Diet Coke out of a wine glass. The photos from the incident came from Trump's appearance at United Nations General Assembly on Tuesday. While the images certainly elicited jokes on Twitter, some social media users reminded others that the president does not drink for personal reasons.

Perhaps the best way to understand Trump's reason for not consuming alcohol is by looking at his own remarks about his brother Fred Trump. In 2017, Politico reported that Trump avoided inebriation after seeing his brother struggle with excessive alcohol consumption.

Back then, Trump said his brother was the "best-looking guy" with a great personality but added "he had a problem" and that it was "with alcohol." Based on his brother's advice, Trump never drank. "And to this day," Trump said in 2017, "I've never had a drink, and I have no longing for it. I have no interest in it."