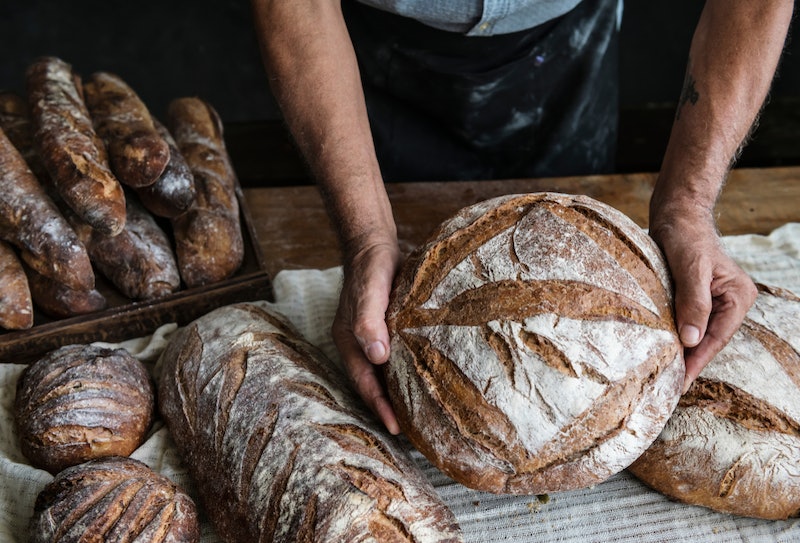 People living with celiac disease might be able to eat gluten again in the foreseeable future. Currently, the only treatment for the autoimmune condition is strict adherence to a gluten free-diet, as gluten causes damage to the small intestine in people with this condition. Now, a celiac vaccine, Nexvax2, is in its next stage of research, meaning treatment for celiac disease might be available soon.

According to a recent press release, Nexvax2 is designed to stop the inflammatory immune response that happens when people with celiac eat gluten, which is a protein found in wheat, barley, and rye (among some other types of grains). The vaccine was shown to be safe in a previous trial in 2011, according to People. The second round of trials for the celiac vaccine is set to roll out in Melbourne, Australia, where researchers aim to recruit 150 celiac patients from Australia, the U.S., and New Zealand.

Beyond Celiac reports that Nexvax2 is a form of immunotherapy — it’s not a preventative vaccine, like a flu shot, but rather, it stimulates the body’s immune system in order to treat the active disease. A small amount of the vaccine is given to start, and then the dosage is gradually increased so that the body builds resistance to the gluten protein over time.

“The vaccine is designed to target the 90 percent of celiac disease patients with the HLA-DQ2 genetic form of the disease,” Dr. Jason Tye-Din, a gastroenterologist and head of celiac research at the Royal Melbourne Hospital, told The Sydney Morning Herald. “A successful therapy that can restore normal gluten tolerance would revolutionize celiac disease management,” he said. People notes that Nexvax2 doesn’t mean that celiac patients will be able to eat gluten again right away, as immunity is built up slowly over time with treatment.

Bustle previously reported that a separate set of researchers are also targeting the compounds — or antigens — inside the gluten protein that trigger immune reactions in people with celiac disease. They found a way to narrow in on the gluten protein molecule itself, and stop it from setting of an immune reaction. Essentially, those researchers found a way to flip the gluten/immune system reaction switch to ‘off’.

Beyond Celiac notes that while most people are familiar with vaccines designed to prevent illness, therapeutic vaccines, like Nexvax2, are designed to treat illnesses that people already have. They work by targeting the immune response that’s already activated in the body. Nexvax2 is designed to “reprogram the immune systems” of people with celiac disease, so that they stop reacting to gluten.

Celiac disease is a hereditary autoimmune condition. It affects up to 1 in one-hundred people worldwide, according to the Celiac Disease Foundation. If left untreated and undiagnosed, celiac can cause serious health complications over time, such as lymphoma and some types of cancers. Celiac causes inflammation of the small intestine, and symptoms can include bloating, abdominal pain, joint pain, and an inability to absorb nutrients due to intestinal damage.

Dr. Tye-Din told The Sydney Morning Herald that “The results from the national and international Phase 1 trials showed that the therapy was safe and well tolerated even at the highest doses used, and also showed an intended biological effect on the immune system in patients with celiac disease.” So, while the new celiac vaccine looks promising, the second round of trials will, hopefully, shed further light on how safe and effective the new vaccine really is. Fingers crossed.