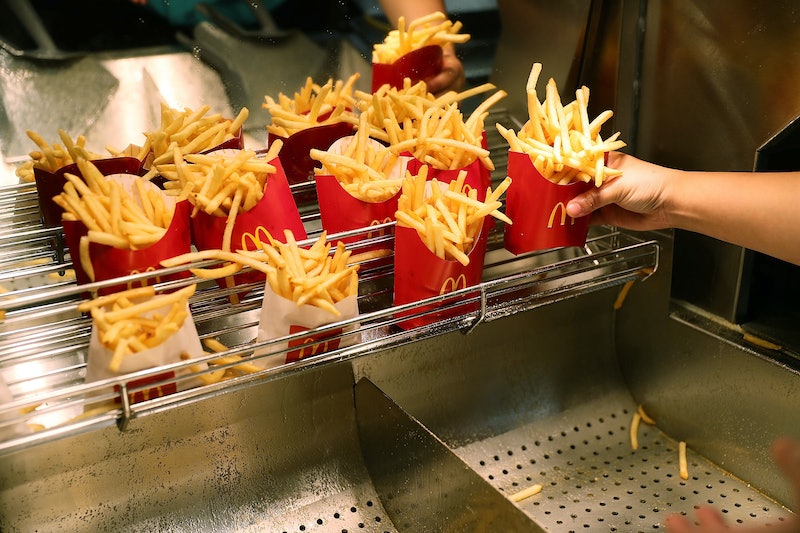 If you've ever eaten fast food, then you should already know that McDonald's has the best french fries, like, in the entire world. This is basically a fact. What you definitely didn't know, though, is that not only are they delicious all the time (seriously, how are they that good?), but they're also... helping your hair grow? That's what the internet seemed to think after science discovered that a chemical used to make McDonald's fries can fight hair loss, and even help regrow hair. In fact, according to the research, it might be one of the best hair regrowth treatments around. But before you get too excited about the prospect of fries helping with hair growth, it's important to take a look at the science.

According to Newsweek, there is a chemical that is used in making McDonald's fries that can actually fight hair loss and promote follicles to regrow hair. It's worth mentioning that this study has only been conducted on mice so far, and that the simple act of eating McDonald's fries isn't going to do much for you hair-wise. But according to the report, scientists are confident that this chemical might have some interesting implications for humans.

So, what's the study? Basically, scientists from a stem cell research team at Yokohama National University in Japan used a chemical found in McDonald's french fries called "dimethlypolysiloxane" to regrow hair in mice — and it worked. This chemical, which is a silicone, is generally added to McDonald's fries to stop the cooking oil from frothing — but this is the first we're hearing in the mainstream that it could benefit hair growth. While the experiment was done on mice and not people, preliminary tests showed that it was likely to be just as successful for humans.

According to a release by Yokohama National University published in Science Daily, researchers say that the breakthrough happened after scientists were able to mass-produce "hair follicle germs" (HFG) for the first time ever. To give you a slightly science-y explanation of what this means: HFG are cells that drive follicle development, and they are imperative in hair loss research. The scientists involved in the experiment said that the use of dimethylpolysiloxane was crucial to their success. The team created 5,000 HFGs, then put them on a chip, which was transplanted onto the mouse's body. It only took a few days before the team reported black hairs where the chip had been transplanted — and those HFGs were created with the assistance of the silicone dimethlypolysiloxane.

Scientists were, obviously, thrilled with the results, which are a huge advancement for hair loss research. Professor Junji Fukuda of Yokohama National University said, "This simple method is very robust and promising. We hope that this technique will improve human hair regenerative therapy to treat hair loss such as androgenic alopecia (male pattern baldness). In fact, we have preliminary data that suggests human HFG formation using human keratinocytes and dermal papilla cells."

While hair loss is nothing to be ashamed of, many who experience it due to medical conditions or simply as a result of aging begin treating it with a myriad of products and medications that don't always work the way manufacturers claim they do. So, this research is deeply exciting from a medical standpoint, and opens a lot of doors to the future of researching hair regrowth treatments.

The silicone dimethlypolysiloxane is used in McDonald's fries to keep oil from frothing, though researchers haven't said that the actual act of eating fries can lead to hair growth. However, the chemical itself could hold some promise, which is definitely cool. And for the record, you should probably go out and get yourself some fries anyway. Like I said, they're the best.

Editor's note: This story was updated on Feb. 6 from its original version.