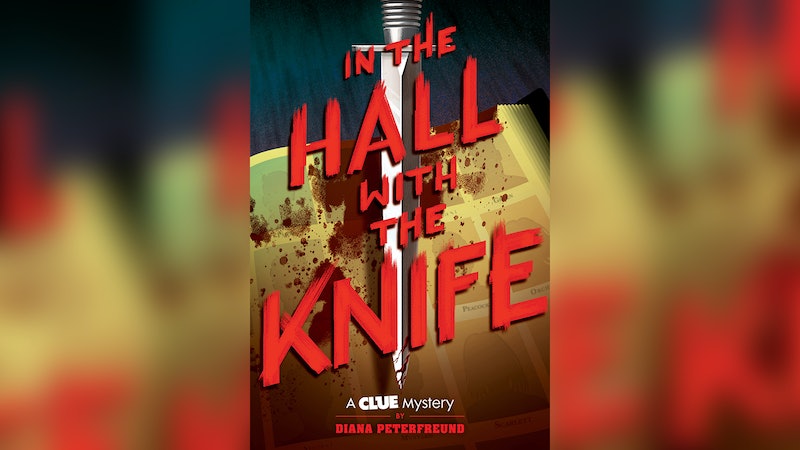 For generations, Clue has brought murder-mystery fun to family game nights in homes across the U.S. As a humongous Clue fan, I can tell you that, aside from the occasional video game adaptation and the particularly excellent 1985 movie, the world has not had nearly enough Clue spin-off media.

Thankfully, In the Hall with the Knife is here to fill that gap. Set at the Blackbrook Academy, the novel centers on six students — Beth “Peacock” Picach, Orchid McKee, Vaughn Green, Sam “Mustard” Maestor, Finn Plum, and Scarlet Mistry — who find themselves trapped in the school with Headmaster Boddy's... well, body. It's clear the kids have a murderer in their midst, but will they live long enough to find out whodunnit?

Diana Peterfreund's In the Hall with the Knife lands in stores on Oct. 8 from Amulet Books. You can pre-order your copy today from your favorite bookseller.

≈ Glossy wood paneling shimmered with the polish of a century, and leather-bound volumes of old yearbooks stood in rows as a testament to all the scholarly glory that had come before. As Orchid McKee entered, her gaze landed on the gilded wooden engraving of the school’s crest mounted right above Headmaster Boddy’s door.

TO MAKE MEN OF KNOWLEDGE AND INTEGRITY

Naturally, they never changed it after the school went co-ed. She wondered what they planned to do with the women.

The hard-backed wooden chairs lined up along the wall outside his door seemed crafted to be the most uncomfortable seats imaginable, the better to impress upon the occupants that they were in trouble and they’d better get used to squirming. There was already a student sitting in one.

Orchid perched on the very edge of another.

She wasn’t in trouble, and she hadn’t squirmed in years.

Of that she was sure. Orchid had crafted her entire existence at Blackbrook to make sure she would never be noticed for anything. The oversized, hooded sweaters, the mousy-brown hair, the glasses and the headphones and the ever-present fat book — all were a perfectly crafted costume saying a single thing: boring. Her homework was always meticulously done and turned in early, if she could at all manage it. She didn’t party or sneak off campus to drink in the woods near the ravine. She’d never even gotten dragged into the usual dorm room drama, though it probably helped that she’d also paid the private room premium on her boarding bill ever since freshman year.

Orchid had crafted her entire existence at Blackbrook to make sure she would never be noticed for anything.

Which was why, when the person seated next to her nudged her elbow and asked, “Whatcha in for, McKee?” she just shrugged and returned to her book, letting her too-long bangs fall over her face. You could deflect quite a lot of conversation with a simple shrug. Orchid had been perfecting hers for a decade.

But Phineas Plum, seated in the hardback chair beside her, wasn’t much for going unnoticed. If you were making that luxe boarding school movie, you couldn’t have cast the part of hipster nerd any better. Cute, and boy did he know it. Smart, and he made sure everyone knew that part, too. At a school like Blackbrook, the resident genius enjoyed all the popularity of other schools’ star quarterbacks or head cheerleaders.

“I don’t know, either,” he barreled on, as if Orchid had invited conversation. “Though, I guess, since it’s the middle of junior year, it might have something to do with academic honor societies.”

Possibly. Orchid’s grades were excellent, and everyone at school knew that Finn was the best student in the class.

“Though I don’t see Scarlet,” he added.

Make that the best male student. Scarlet Mistry lived down the hall from Orchid, and, curiously, always seemed to have insider knowledge on every student’s academic ranking, which she’d regularly announce to any person within spitting distance. She was also class president, the head of the Campus Beautification Committee, and — in Orchid’s opinion — a complete pain in the butt. Orchid hadn’t moved to Maine to get mired in the same competitive, mean-girl drama that had devoured so many of the young women she’d known back in California. It’s not like Orchid kept up with the news from back home — but some stories you couldn’t avoid. The tabloids made sure of that.

No, she’d come to Maine to stay out of trouble. And the fact that Scarlet wasn’t also sitting in the headmaster’s office right now did not bode well for Finn’s honor society theory.

“Or maybe we screwed up,” she suggested to him.

He laughed weakly. No, she bet Finn could never imagine doing anything wrong at all. Not Blackbrook’s golden boy, the scientific genius who would uphold the campus legacy of innovation.

Half a century ago, Richard Fain, still a student at the school, had somehow stumbled upon a formula for some sort of mega-powerful industrial glue, which had made him — and Blackbrook Academy, which shared the rights to the patent — millions.

Not the most glamorous of inventions, glue. Not like a microchip. Orchid doubted anyone would actually make a big-budget biopic of a glue inventor. But it was still enough to put the tiny boarding school on the map.

For decades, it had been the premiere destination for the dedicated science student. At least those who didn’t mind the remote setting, out on the tip of a rocky peninsula, so far into the wilderness of Maine it was practically Greenland.

They said if you came to Blackbrook, you were either a complete genius or hiding from something.

Orchid preferred to let people think she was a genius.

From behind the closed door to the headmaster’s private chamber, there came a loud thump, followed by the murmur of raised voices.

“You can’t do this to me!” That was a girl’s voice. Orchid and Finn exchanged glances.

They said if you came to Blackbrook, you were either a complete genius or hiding from something.

More words, shouted over one another. Orchid couldn’t make out much, until:

“No, you will live to regret this. I’ll make sure of that.”

The door flew open, and standing on the threshold, feet planted apart like she was some avenging Amazon, stood none other than the six-foot-tall terror of the tennis court — Beth “Peacock” Picach.

Well, that’s what her fans called her. Orchid was never much for sports, and she thought the nickname was stupid, but Beth Picach had embraced it, as well as the cawing that ensued in the stands whenever her matches began. She’d even dyed the tips of her signature blond ponytail a vibrant blue, a color which was currently contrasting furiously with her crimson cheeks.

Peacock looked at the two students sitting in the chairs and scowled. This was the stare that struck fear in the hearts of her opponents.

Headmaster Boddy called to his secretary, then paused.

In truth, most of the staff had packed up the second their last exams were finished and headed for the mainland to spend the break with friends and family. It was always dead at Blackbrook over the holidays.

Orchid knew that all too well.

She felt a sudden dread, deep in the pit of her stomach. She didn’t care what Finn’s theory was. No way were they being called in here to be informed, one by one, of some dubious academic honor. She’d screwed up. Somehow, despite all her careful planning . . . she’d screwed up.

“Good luck,” Finn said to her, as if they were friends. They were not friends.

She felt a sudden dread, deep in the pit of her stomach. She didn’t care what Finn’s theory was.

Headmaster Boddy’s private chamber was cozy, softer than the imperious presence of the office waiting room. Here there were the stern, frowning pictures of the headmasters — always male — who had come before him. But there was also a merry fire burning in the grate, and mismatched plaid cushions on the armchairs across from the great wooden desk. He swiped a heavy-looking brass candlestick from the rug, replaced it on the mantel, and chuckled ruefully. “Let’s try to keep this civil, okay?”