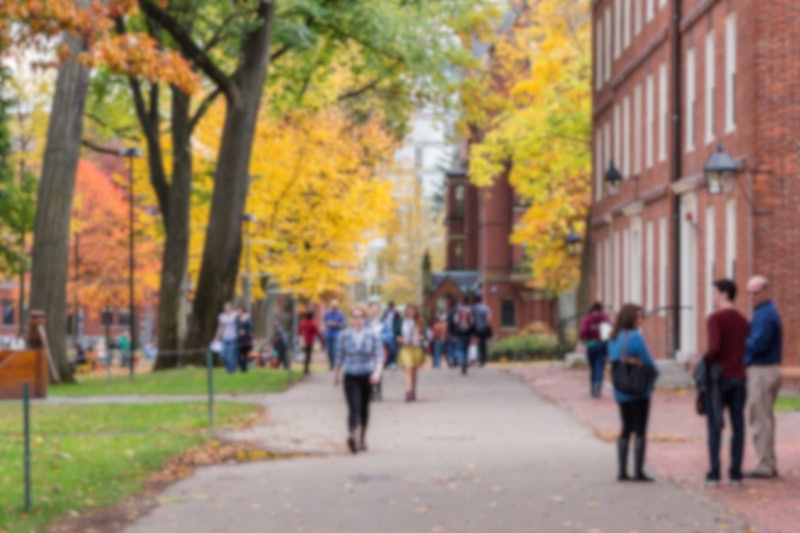 As university admissions rates decrease, workloads increase, and career opportunities become more competitive, college students continue to face mental health struggles. Over 60% of college students in the U.S. reported feeling anxiety over the past year, according to the American College Health Association's Fall 2018 National College Health Assessment, and 10.5% of U.S. adults between the ages of 18 and 25 reported having suicidal thoughts in 2017, according to the National Institute of Mental Health. That means there are a lot of students who may need help — and who may not know how to get it.

“It's easy to isolate oneself and have the sense that no one is really tracking on you, like in high school or when living at home,” Eileen Purdy, MSW, an anxiety therapist, tells Bustle about the transition to college. According to the Centers for Disease Control and Prevention (CDC), suicide is the second leading cause of death for 10-34 year olds in the U.S. Among the general U.S. population, suicide ranks as the tenth leading cause of death.

In the hope of combatting this issue, a bipartisan group of senators and state representatives, including sponsor Republican Senator John Kennedy and co-sponsors Democratic Senator Elizabeth Warren and Republican Senator John Cornyn, recently introduced the Improving Mental Health Access for Students Act. This bill would require public and nonprofit private colleges and universities to put the Crisis Text Line, the National Suicide Prevention Lifeline, and the number for a campus mental health center on the back of every student ID. The bill in question has the potential to impact the health of 20 million college students on campuses nationwide.

Crisis Text Line CEO Nancy Lublin launched the nonprofit organization in August 2013 with the understanding that teens and young adults feel more comfortable sending a text message than picking up the phone in times of distress. Anyone can text "home" to 741741 during a crisis, and a trained volunteer crisis counselor will respond and help the texter navigate the situation. Since the inception of the service, crisis counselors have exchanged over 100 million text messages with people in need. And one in four of those texters mentions school when they reach out, according to Crisis Text Line's trend research.

“We want it to be as easy to get support when you’re in a crisis as it is to borrow a book from the library,” says Ashley Womble, head of communications at Crisis Text Line. A similar law requiring public, private, and charter schools to include the National Suicide Prevention Lifeline on the back of student IDs from seventh through 12th grade went into effect in July 2019 in California. “We know that [the new bill] will increase the number of people who reach out to us for support … because it’s already helping in California,” Womble says.

A representative from the National Suicide Prevention Lifeline tells Bustle in a statement over email that the Lifeline answered over 2.2 million calls last year. “The Lifeline has been proven to deescalate moments of crisis and help people find hope,” the statement reads.

Talking about suicide and making people aware of resources is very relieving.

Dr. April Foreman is a psychologist, board member of the American Association of Suicidology, and a nationally recognized expert on suicide prevention. While she supports the Improving Mental Health Access for Students Act and its mission to increase awareness of hotline numbers, she warns that the underfunding of crisis centers and mental health services jeopardizes the ability for these organizations to keep their doors open. “You can put the number on the ID badge, and that’s great,” she says. “But, if you don’t demand that your licensed providers be trained and demonstrate competency, if you don’t fund crisis care … then you’re just giving people a crisis line to nowhere.”

Dr. Foreman likens the situation to telling everyone to go to a food pantry without making sure it's stocked with supplies first. It’s important to make people aware of the resources available to them, but it’s just as important to make sure those resources are equipped to handle the traffic increased awareness brings.

Mental health struggles continue to gain more widespread attention, especially on college campuses, but the amount of resources hasn't kept pace, Womble says. And that poses a problem for the more than 9 million American adults who reported having suicidal thoughts over the course of a year, according to a CDC report from 2013.

Some people might think constantly being exposed to suicide prevention information could trigger suicidal thoughts, but both Womble and Foreman say making this information more accessible doesn't carry that risk. “There’s research out there that shows that if you ask someone if they’re thinking of suicide, you’re not putting the idea in their head,” Womble says.

Dr. Foreman agrees, telling Bustle that if someone feels triggered by the hotline numbers, that’s a great reason to give one a call. “Talking about suicide and making people aware of resources is very relieving,” she says.

If the bill passes through Congress, which Crisis Text Line hopes to happen this year, colleges and universities would start printing the numbers on new ID cards from then on out. “They wouldn’t have to take everybody’s IDs and start over,” Womble says. “There’s no cost associated.”

Since bills constantly move through Congress, Crisis Text Line partnered with the American Foundation for Suicide Prevention to create an easy way for supporters to send a letter about the legislation to their state representatives. Found on both organizations’ websites, they are making a strong push for people to help raise awareness about the act.

The challenges that come with the transitional period between childhood and adulthood too often result in mental health struggles, or even loss of life. And that’s what this bill hopes to combat. Hopefully, with easier access to crisis management resources, young people in distress will feel more comfortable finding the help and support they need as soon as they need it.

More like this
How To Protect Your Digital Privacy If You Need An Abortion Post-Roe
By Kaitlyn Wylde
How 5 People Upended Their Lives To Fight For Abortion Rights
By Hannah Smothers
17 Powerful Photos From March For Our Lives Protests Across The U.S.
By Michelle Toglia
How To Fight For Reproductive Rights, Based On How Much Time You Have
By Courtney Young
Get Even More From Bustle — Sign Up For The Newsletter