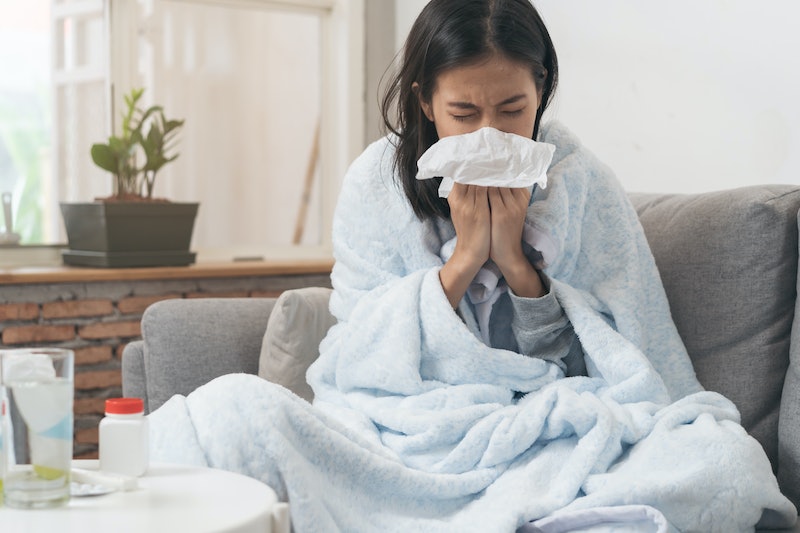 Cold and flu season is a drag every year, and every person has their own superstitions and ideas about how to "cure" the common cold, from chili-infused soups to lemon and ginger teas and peculiar home-brewed remedies. However, because of the viral nature of colds and their intensely contagious nature, it's proven extremely difficult for scientists to do anything to combat their spread. A new study from researchers published in Nature Microbiology introduces a new possible way to stop the common cold in its tracks — but, experts tell Bustle, we're still a long way from a cure-all that will make it a thing of the past.

The study focused on a class of viruses known as enteroviruses, a category which includes rhinoviruses, the culprits behind common colds. Most of us catch rhinoviruses through encountering virus particles spread by an infected person, through the air, on surfaces, or body contact, according to the Mayo Clinic — which is why it's so important to cover your mouth when you sneeze and sanitize your hands when you have a cold. Once rhinoviruses enter the human body, they replicate; they actually don't like our body temperature, so they tend to replicate best in colder areas like your nasal passages. There's no treatment beyond simply waiting for the cold virus to pass, because antibiotics are no use against it and no effective vaccines exist.

The new study looked at the structure of enteroviruses themselves to see if they could be prevented from replicating. The researchers found that enteroviruses, including rhinoviruses, actually need something in infected human and mammal cells in order to replicate successfully. They can't do it themselves. Using two different kinds of enteroviruses, the scientists found that when cells were lacking a certain gene, enteroviruses could infect them but couldn't replicate, stopping the virus in its tracks.

The gene in question encodes an enzyme called SETD3, and it seems it's really important for enteroviruses to replicate at all. "This single human protein helps the common cold virus to replicate and spread," lead author Dr. Jan Carette tells Bustle. "Inactivating this protein could be a new strategy to prevent colds." When the scientists produced a bunch of human cells without SETD3 and infected them with a huge range of enteroviruses, including three types of rhinovirus, the polio virus and one associated with inflammation of the spinal cord, none of the viruses could replicate. The enzyme's absence meant they were completely stuck.

When mice were bred to lack SETD3 from birth, they grew up without any apparent ill effects. "Importantly, mice that completely lack the protein are seemingly healthy," Dr. Carette tells Bustle — but they're totally resistant to all kinds of enteroviruses, including rhinoviruses. They couldn't catch a cold if they tried.

It's not really clear what it is about SETD3 enzymes that enteroviruses really like, but it's not the section that cells use; it's another part of the enzyme entirely. The scientists aren't aiming to delete SETD3 enzymes from humans entirely to ward off the common cold, but they do think that some kind of drug could be created to "turn off" SETD3 and help us stop the common cold without doing anything to our cells in general. "We have taken an important first step and have shown that human cells lacking this protein and mice that lack the protein have become resistant to infection by this group of viruses. The second, equally important, step is to develop a drug that temporarily disables this protein," says Dr. Carette.

We're still a long way from a cure-all for the common cold, but it's certainly an interesting step in a new direction.