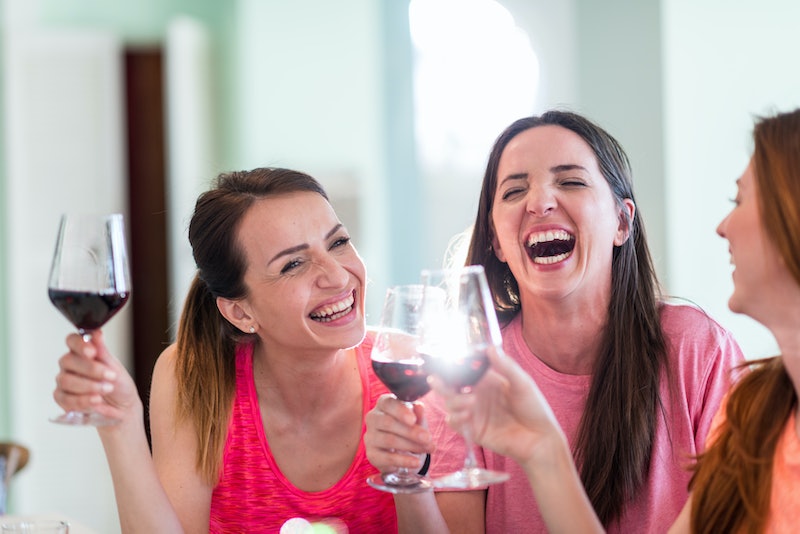 Good news: happy hour may have an unexpected health benefit. That is, if you're a wine-o. According to a new report from The American Chemical Society's Journal of Agricultural and Food Chemistry, there is reason to believe a primary component of wine's chemical makeup — polyphenols — can benefit your oral health. Put simply, wine might help prevent cavities. The reasoning lies in the compound's antioxidant nature (that is, its ability to protect the body from harmful free radicals). For this same reason, it is already largely thought that red wine may be good for your cardiac and gastrointestinal health, according to the study. With this knowledge in mind, scientists sought to determine whether the same could be true about its effects on someone's teeth and gums.

Researchers M. Victoria Moreno-Arribas and colleagues of the Instituto de Investigación en Ciencias de la Alimentación (translation: Research Institute in Food Sciences) in Spain spearheaded the experiment. They compared the effects of wine polyphenols, in addition to grape seed and red wine extracts, on cells that simulate human oral gum tissue. The researchers were able explore how bacteria stick to teeth and gums and, in turn, cause dental plaque, cavities and periodontal disease. They discovered two wine polyphenols — caffeic and p-coumaric acids — were able to prevent bacteria from sticking to the fake tissue (which would mean, it would do so with one's mouth). Further, they discovered these compounds are typically better at preventing bacteria from affixing itself to the gum-simulating cells when isolated, rather than as a part of wine extracts. The effects of the polyphenols were even more noticeable when mixed with an oral probiotic called Streptococcus dentisani.

In other words — the same polyphenals that are found in wine spelled bad news for the bacteria that hurts your teeth.

If you do not have an extensive chemistry background, the information presented here may be difficult to grasp. In reality, this new finding actually makes a lot of sense when you consider what a polyphenols actually is. According to Natalie Olsen, a registered dietician, polyphenols are, "...a category of chemicals that naturally occur in plants," of which there are more than 500 unique varieties found in nature; they are known namely for their ability to protect cells from damage, consumption of polyphenols has been linked to decreased bodily inflammation, and a lowered risk of type 2 diabetes, heart disease, and obesity. Picture them as little knights in shining armor, protecting your cells from damaging bacteria.

The supposed health benefits of drinking wine is an evergreen topic. Though its role in the maintenance of heart health is now pretty well-documented, more and more discoveries about the ways in which this beverage does the body good are being made all the time

Despite a reputation for leaving you feeling lethargic and forgetful, a report published earlier this month out of the University of Rochester Medical Center suggests, when consumed in moderation, low doses of alcohol may actually provide more cognitive clarity. Sound counter-intuitive? In fact, the phenomenon involves some pretty complex science. By consuming a small amount of alcohol, you may be removing excess waste that has accrued over time in your brain. An example of these is proteins like beta amyloid, which, in large quantities is one of many substances associated with the development of Alzheimer's disease.

The decision to drink alcohol is deeply personal, and one that should not be approached lightly. While a lot can be said for the benefits of abstaining completely, there may be surprising benefits for those who do choose to indulge with the occasional glass or two of wine.

In any case, if its exceptional dental health you are aiming for, begin with perfecting your toothbrushing habits, use dental floss, avoid too many sugary snacks, and resist the urge to whiten them too often.