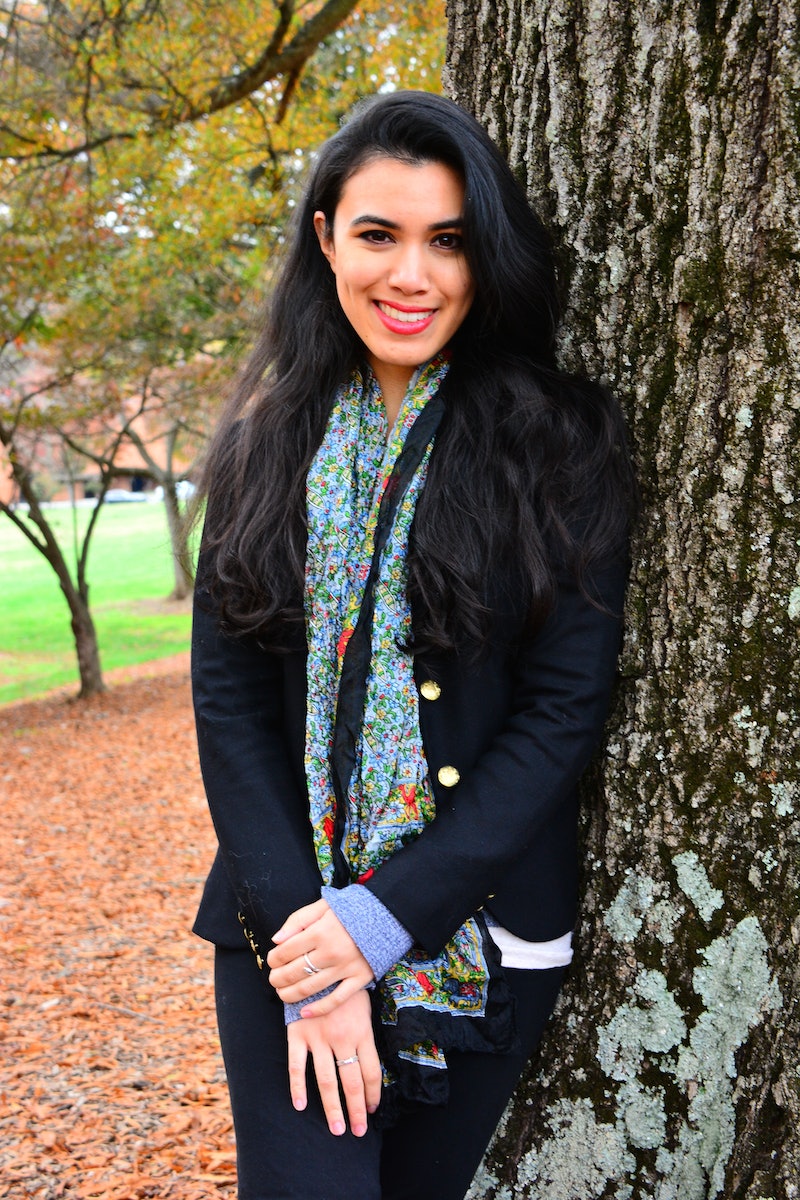 Last year, author Roshani Chokshi earned herself a spot as one of young adult literature's biggest stars when she hit the New York Times bestseller list with her stunning debut novel The Star-Touched Queen — a dreamy, star-crossed romance with roots in Hindu and Greek mythology. The story follows one not-so-average Princess named Maya, whose rebellious nature leads her down a dark path. But, like many other readers, I found myself equally as enchanted by another character: Guari, Maya's young, bright, and hopeful sister.

In the recently released A Crown of Wishes, the companion novel to A Star-Touched Queen, Gauri takes centerstage  — and, Chokshi admits, it’s because the character demanded it. Loudly. “Gauri was just insistent," Chokshi tells Bustle. "She ended up becoming such a powerful background force in [The Star-Touched Queen] that I had to give her a story."

But while the fiery, feisty princess insisted upon her own story, she didn’t make things easy. "Gauri was a chore to write," Chokshi says. "She didn’t like following outlines, laughed openly at my ideas of backstory and kept trying to kill her love interest. The savagery.”

If Gauri sounds like the annoying (but fun!) sibling in your own life, that’s because she’s based upon a very real person: Chokshi's younger sister. “My little sister and Gauri even share the same scar on their cheek that looks, deceptively, like a dimple," she says.

Both books take readers on adventures through an atmospheric underworld and a reimagined India populated by fantastical creatures — like the chatty Kamala, a talking horse with a penchant for human flesh and a quick wit that makes her responsible for some the best one-liners in YA literature. Chokshi borrowed elements from Hinduism and Greek myth as she created the world, but she also explored classic concepts from fantasy worldwide. “I’ve always liked that persistent motif of an Otherworldly animal,” she says. “We find it throughout multiple cultures: the Celts and their 'white hart,' the Ramayana and the golden deer that entrances Sita, every Greek myth of a Zeus seduction.”

The success of Chokshi's books comes during a time of spirited debate within the YA community about literature that is considered #OwnVoices — i.e. books about diverse characters written by authors from that same diverse group, according to a description from hashtag creator Corinne Duyvis.

Chokshi herself is of Indian and Filipina descent, and she’s faced some criticism from both people outside of and from within those communities about her twisty take on Indian myth. “I think there’s always been an inherent backdrop of marginalized writers, especially female writers, getting the sharper end of the stick with reviews,” she says. "When The Star-Touched Queen came out, I saw a lot of reviews calling it ‘really weird’ and 'just way too strange,' but it was an archetypal tale. It took me awhile to understand that it was otherizing, and that perhaps it wasn’t my fault or the story’s fault."

“That’s not to say that The Star-Touched Queen doesn’t deserve criticism,” she adds. “Of course it does. I’ve just had to learn how to process and separate. I’m grateful for reviews, even negative ones, because they taught me how to examine my own stories and craft. It was especially hard getting criticism from my own community, but ultimately it helped me realize that I write my stories from a place of diaspora. I am not writing for the native Filipino or native Indian because I’m writing for an audience like me — second-culture kids whose exposure was different, but whose claim to those tales is the same. With my next projects, I’ve been thinking actively about representation. Readers deserve to see themselves reflected in stories with dimension and empathy. I hope my works honor that.”

That second (or even third) culture space is one that she thinks more and more of the YA audience can relate to, as American youth become more diverse. “It’s a weird limbo,” Chokshi says, “But not intentionally unkind, I hope. Growing up, I spent a lot of time justifying that I belonged. It was also hard when it came to looks. So often, I’d hear 'you don’t look XYZ' – but they’d say it like it was a good thing. I hated that."

Though she's been writing since her teens, Chokshi was studying to become a lawyer when she decided to seriously focus on getting published. "I was that super-obnoxious high schooler who wrote thinly-veiled Twilight fanfic and announced to everyone that I was writing a book," she says. “I’ve been at this for a while. I queried agents in high school, using second person and saying things like, 'This book has no glittery vampires!' when I freaking love glittery vampires. I totally deserved every form rejection.”

She spent college writing and “daydreaming about what I’d wear at the film premiere of my book.” But it wasn’t until after she’d graduated that things fell into place. "I think it was a combination of reading enough, being rejected enough and wanting enough," she says. "I spent the year after graduation writing seriously and studying for the LSAT. Magic happened. I signed with my brilliant agent fall of 2014 when I started law school. Cue more rejection. I was devastated for six months. And then, more magic happened, and The Star-Touched Queen sold in March 2015. I’ve never been happier."

She recently quit law school to write full-time – a decision she didn’t take lightly, especially as the child of two cultures with very specific ideas about success. But thankfully, Chokshi had her family’s support in the decision. "My parents saw how hard I worked," she says. "It was harder to justify to other people around me. I was roundly dismissed. I still am. I’ll go to brown parties and still hear, 'It’s not too late to go to medical school!' Or 'Okay, you’ve had your book, now go back to school.'"

"I know people mean well, and the last thing I’d want is to make them feel small or humiliated," she says. "So I just thank them for the advice and make my way to the table with all the samosas.”

Next up for Chokshi? She's currently working on a novel set in 1889 Paris titledThe Gilded Wolves. “It’s inspired by episodes within Ferdowsi’s Shahnameh, certain Biblical stories, and, honestly, my eternal question of 'Why do bad things happen to good people?'" she says.

Chokshi admits the book led to some soul-searching of her own. “It ended up being a rather spiritual book for me," Chokshi says. "My dad is a practicing Hindu and my mom is a practicing Catholic. Growing up, we went to temple and church. This time period, with beauty and industrialization at the forefront, and horror lurking at the edges, was the perfect setting. Readers can expect sorrow and sexy times, questions without answers, and answers that need questioning. Oh, and champagne and epic parties. This is, after all, a Rosh book."