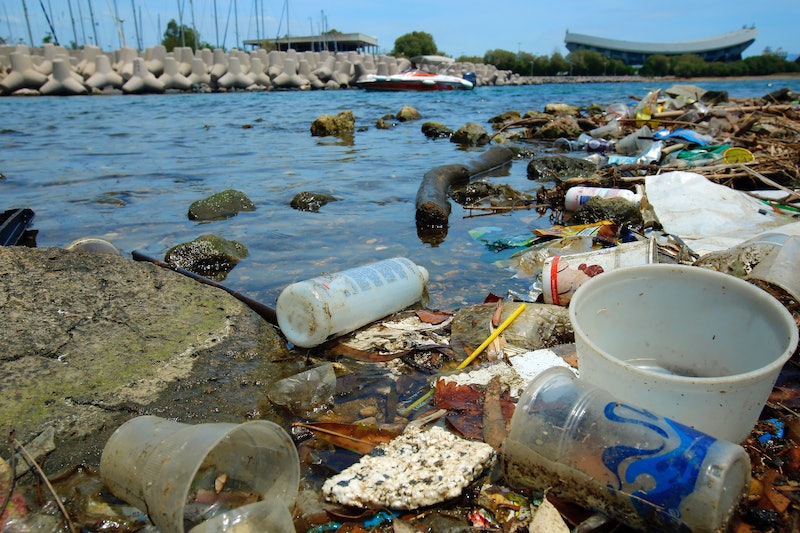 The recent death of a young whale in the Philippines has illustrated firsthand some of the devastating effects that human pollution has had on marine life. Shockingly, scientists discovered that a young, male whale had 88 pounds of plastic bags in its stomach when it died — and it suffered from significant dehydration and malnutrition as a result. In the wake of the whale's death, many are calling for a renewed commitment to diminishing pollution in the world's oceans, CNN reported.

CNN noted that the whale's body was found on Friday in Mabini, Compostela Valley. The outlet reported that the D'Bone Collector Museum, a natural history museum in Davao City, was called to conduct a necropsy on the Cuvier’s beaked whale — and the results appeared to shock the museum's scientists. As the organization wrote in a Facebook post on Sunday:

40 kilos of plastic bags. Including 16 rice sacks. 4 banana plantation style bags and multiple shopping bags [were found inside the whale] ... This whale had the most plastic we have ever seen in a whale. It's disgusting. Action must be taken by the government against those who continue to treat the waterways and ocean as dumpsters.

The New York Times reported that Darrell Blatchley, the owner of the D’Bone Collector Museum, said that some of the plastic was so compressed inside the 1,100-pound whale that it was beginning to form a solid mass. "The plastic in some areas was so compact it was almost becoming calcified, almost like a solid brick,” Blatchley told the paper. “It had been there for so long it had started to compact.” Blatchley also told The Guardian that, in the 10 years that he and his team have been conducting whale and dolphin necropsies, they discovered that 57 of the animals died as a result of ingesting plastic.

CNN reported that Peter Kemple Hardy, a campaigner at the animal welfare charity, World Animal Protection, said that the whale's death served as a "tragic reminder" that the world needs to "work together towards global solutions" to combatting ocean pollution. "Hundreds of thousands of whales, dolphins, seals and turtles are killed by ocean plastic pollution every year, including single-use plastics and abandoned plastic gear from the fishing industry," Hardy told CNN.

Furthermore, the New York Times reported that a 2015 study from Science found that an estimated five to 13 million metric tons of plastic are found in oceans each year. The paper also added that China, Indonesia, and the Philippines are the biggest contributors of ocean plastic in the world. Joel Palma, the president and chief executive of the World Wide Fund for Nature in the Philippines, stressed to the paper that ocean plastic pollution is so problematic in the country for many reasons, including plastic's affordability coupled with limited recycling options.

Blatchley told NBC News that he believes that "the Philippines needs to change," noting that he hopes that the whale's death will inspire more commitment to curbing ocean pollution before "nothing will be left." Certainly, for many, the whale's death served as a striking reminder of the lasting effects than unchecked human waste around the world can have on animal's lives.