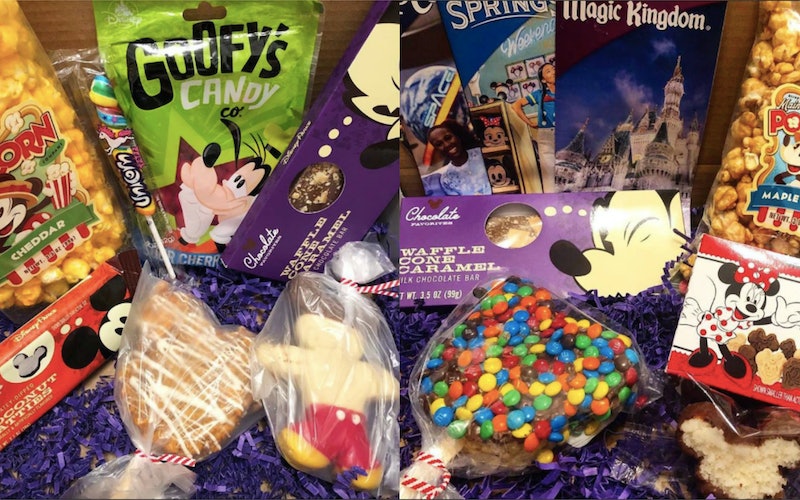 If a dream is a wish your heart makes, then a box of Disney snacks is a wish your nostalgic stomach makes. Well, it appears your wishes have been granted because you can get Disney World snacks delivered to your door. And you don’t need to summon a magic carpet or sprinkle pixie dust or anything.

Because the internet is vast and sometimes good, there is a subscription service that curates packages of Disney park treats and ships them straight to your home. The service is called Boxney — a portmanteau of “box” and “Disney” — and the company offers an array of treats you can typically only get at Disney parks. There’s cookies shaped like Mickey Mouse, Frozen-themed lollipops, Beauty and the Beast chocolate called “Chocolate Tames the Beast,” and Goofy’s gourmet jelly beans, to name a few. Boxney lets you skip the long lines and park passes and cut straight to the goodies.

Boxney has three different monthly subscription boxes: the Mini (seems like a missed opportunity to not call it the “Minnie” but I digress), the Original, and the Premium. The Mini ($30 + shipping) includes three to four items. The Original ($60 + shipping) has four to seven treats. The Premium ($110 + shipping) has a whopping 10 to 15 items. The site says the Original and Premium are ideal for sharing...but if we’re being honest, we know you’re going to horde every last one of those treats away.

As far as whether the products are actually from Disney parks, the brand says, “Absolutely!” Per their website, “Each item we curate comes directly from the Disney parks in Orlando, Florida including the Magic Kingdom, Animal Kingdom, Disney EPCOT, Hollywood Studios and Disney Springs area.”

Boxney specifies on their site that they are not “affiliated with, maintained by, or in any way officially connected” with the Walt Disney Company or any of its parks. Rather, Boxney’s shoppers peruse the Disney parks for the best snacks and treats. “We provide and send items that you typically can only receive within the actual park or on Disney property,” the site states.

In addition to their year-round boxes, they also offer a selection of limited-edition boxes. “On occasion, we will offer specially-themed boxes,” Boxney says on their website. “Perhaps an assortment of items from a country such as France, Japan, Mexico, Italy, etc. from Epcot’s World Showcase. Other limited boxes encompass holidays such Christmas with its seasonal goodies. Special Disney events such as Epcot’s Flower and Garden Festival and International Food and Wine Festival also call for boxes celebrating unique, once-a-year merchandise.”

Per INSIDER, Boxney is currently offering a Gluten-Free Box, which has four to six Disney treats all made without gluten. You can stay up-to-date on these special edition boxes through the tab on Boxney’s site.

If you don’t want to commit to a subscription, Boxney also offers single box purchases of their most popular curated boxes. Mother’s Day is coming up (hint, hint). In addition to addresses across the U.S., Boxney will also ship to a limited range of places internationally. However, that will cost extra in shipping.

Unfortunately, Disney’s iconic Dole Whips and the corresponding Dole Whip-inspired delights are unlikely to be part of any of the packages. There is no Disney magic to prevent those from melting in a non-insulated box.

If boxes of goodies delivered right to your doorstep are your thing — which, of course they are...you’re human, aren’t you? — you have plenty of options. There's Amazon, obviously. There's beauty-specific boxes like Birchbox and Ipsy. There’s even delivery service called Boxed, which delivers bulk packages of pretty much everything you might need. There’s sparkling water and toilet paper and nostalgic snacks like Chewy bars and Cheez Balls. Plus, there’s no membership fees, and there’s free shipping on your first order and all orders over $49. (You won’t have trouble hitting that $49 mark. You did hear the part about bulk sparkling water, right?)

The world is your oyster, packaged in a carefully curated box and shipped straight to your door.