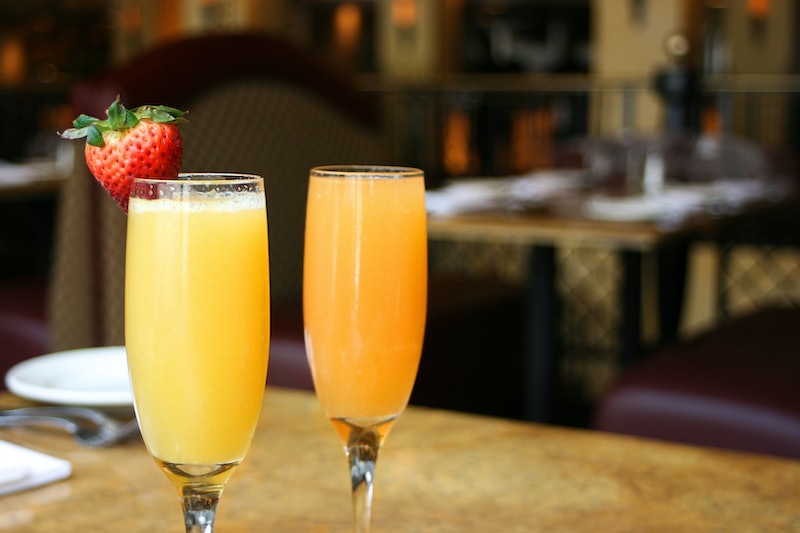 Okay, which one of you wished upon a star and Jiminy Cricket-ed drunken Dole Whips into existence? Well, thank whatever mouse-eared gods you praise because Disney World has started selling Dole Whip Mimosas, PopSugar reports. Sorry, kids. Disney World is for adults now. Please come back with your FastPass when you’re old enough to appreciate what is essentially a slushie with alcohol in it.

You have Wine Bar George, a restaurant located in Florida’s Disney Springs, to thank for this new drunk Disney delight. The Dole Whip Mimosas are a combination of Moscato, Prosecco, and pineapple — the latter being the signature flavor the iconic Dole Whip is known for. The drink is sweet. It’s tart. It’s everything you love about a Dole Whip plus some booze. It is $15, which is a little bit more than you’d usually pay for a mimosa but did you hear the part where I said there is both Moscato and Prosecco in it?

The mimosas are part Wine Bar George’s new “wine country” brunch menu. Starting Saturday, March 30, guests will be able to indulge in the full brunch menu for a limited time. In an email to Bustle, a spokesperson for Wine Bar George called “menu highlights includ[ing] French Toast with caramel sauce, Burrata with avocado and bacon plus Spritzes and Spirits by the carafe.” The menu will be available on Saturdays and Sundays from 11 a.m. to 3 p.m., aka peak brunch times.

If a Dole Whip Mimosa makes you say “pish posh, I am not amused,” 1) how dare you 2) perhaps you will be intrigued by the Dole Whip Froscato, which is also part of the new brunch menu. Did you use your mouse detective skills to decipher that portmanteau of “frozen” and “Moscato”? Well done. The Dole Whip Froscato, just one of a handful of frozen brunch-y cocktails, incorporates Moscato, Vodka, and Dole Pineapple into one delicious drink. A Froscato, like a dream, is a wish your heart makes.

If vodka isn’t your thing, you can swap it out for Prosecco, according to PopSugar. The Froscato runs a little cheaper than the mimosa at $13. Both drinks are also available at Wine Bar George’s quick service window, The Basket, located in Disney Springs.

This isn't the first time Disney has dabbled in switching up the classic Dole Whip. Last year, you could get a Dole Whip with rum in both the Anaheim and Orlando parks. Last spring, a Dole Whip in doughnut form made an appearance at the Coffee Cart on Main Street in Disneyland. Not to be outdone by its dessert counterpart, there were also Dole Whip cupcakes available last summer.

Lest you think that were all the forms a Dole Whip could take, allow me to say four, small words: pumpkin spice Dole Whips. According to a few Disney park foodies, the Disney’s Aulani Resort and Spa in Ko Olina, Hawaii has a secret menu. As of last fall, that secret menu included what some guests dubbed the "pumpkin spice Dole whip." It's a pumpkin soft serve ice cream that bears to the classic pineapple whip, and it's autumnal themed. What more do you need?!

If you can’t make it to Disney World, fear not: the internet is vast and full of ways you can bring a little bit of Disney to you. You can try making a DIY Dole Whip Mimosa. (It's basically just regular mimosa with some pineapple juice and coconut milk.) While it may not be the real deal, this at-home version will be significantly cheaper and you’ll get to control exactly how much Moscato is in it. Also, you can sip on it at home, in your pajamas, while watching Mulan. Truly a Disney dream come true.