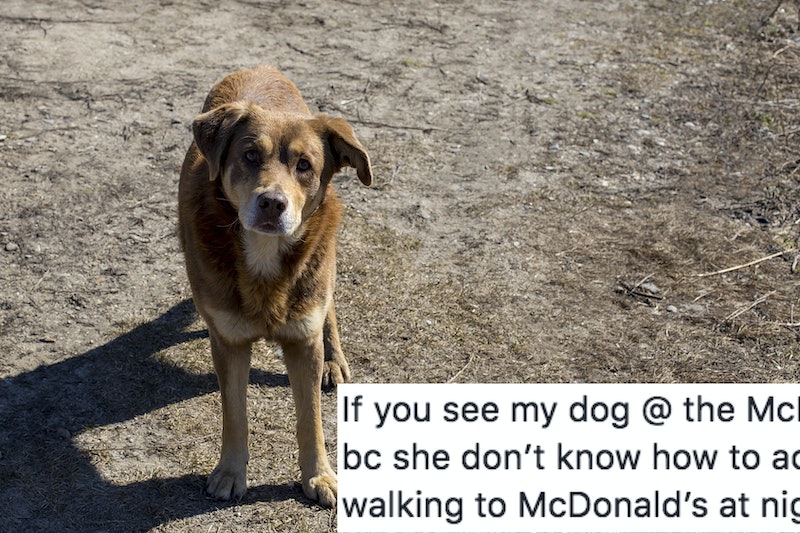 Dogs would make excellent con artists. For starters, they’re extremely cute, highly convincing, very cute, motivated by treats, and did I mention they’re cute? One dog owner witnessed this first hand after she found her dog pretending to be a stray for free McDonald’s at the local drive-thru. Attention Hollywood: give us the all-dog Oceans movie we deserve and cast this pup as the lead.

In a Facebook post that has since gone viral, Betsy Reyes of Oklahoma City shared a picture of her dog Princess sitting in a dark parking lot, doing her best to look like a regular, unassuming dog. Princess, however, was doing something far from regular. Reyes realized Princess was sneaking out of the house and would walk to McDonald’s at night. “She’s not even a stray dog,” Reyes continued, saying Princess has been posing as a pauper “so people will feel bad for her & feed her burgers.” Reyes told people to stop giving her dog burgers because Princess “don’t know how to act.”

Princess is truly a scamming icon, tricking unsuspecting and gullible humans into giving her their burgers and fries. I have nothing but respect for you and your game, Princess. All hail Princess, Queen of Sneaky Burgers.

Reyes even caught Princess in the act, sharing a couple of the videos on Facebook a few hours after her initial post. In one video, you see Princess sitting patiently in front of a car that has just come through the drive-thru. Princess sits, looking up at the driver who tosses a couple fries from his window down to Princess. Princess snarfs those fries right up. Scam successful.

In the other video, Princess actually comes up to Reyes’ car. Princess, recognizing her owner, jumps up on the car, wagging her tail. She pauses for a brief moment before continuing on to scam another car. This is a bold move: recognizing she’s been caught and still getting in one last scam. Who knows if she was able to score one more burger but Princess’ confidence is admirable.

Despite this example of Princess’ scamming prowess, a recent study suggests dogs might not be as smart as we humans think. The recent research, published in the journal Learning & Behavior, states that while dogs definitely are dumb-dumbs, they aren’t actually inherently smarter than other animals. “Dogs are special, but they're not exceptional,” study co-author and senior psychology lecturer at Christ Church University Britta Osthaus wrote. “They're smart, but they're not stand-out smart.”

This not only counters Princess’ clear abilities as a scamming savant, it challenges the notion of many pet owners. Who doesn’t know a dog owner who is convinced their dog is a genius? Who hasn’t seen videos of dogs “counting” numbers or doing the salsa (a difficult dance for humans and dogs) and thought, “Yep, dogs are brilliant”? Because humans live so closely with dogs, Osthaus suggests this has caused bias in our day-to-day assessment of their intelligence. “Dog cognition is, no doubt, unique,” the study states, “because the cognition of every species is unique.” However, dogs, regardless of their burger con abilities, aren’t exceptionally intelligent as a species.

While sciences suggests she may not necessary be a shining example of smarts, Princess definitely joins internet cannon of animals who got the food they deserved, right alongside beloved garbage icon Pizza Rat. Animals are out here believing in themselves, working toward their goals, hustling in the McDonald’s drive-thru, and getting the results.

We can all learn from Princess: if you work hard and stay committed to your dream, you too can eat a lot of free burgers.