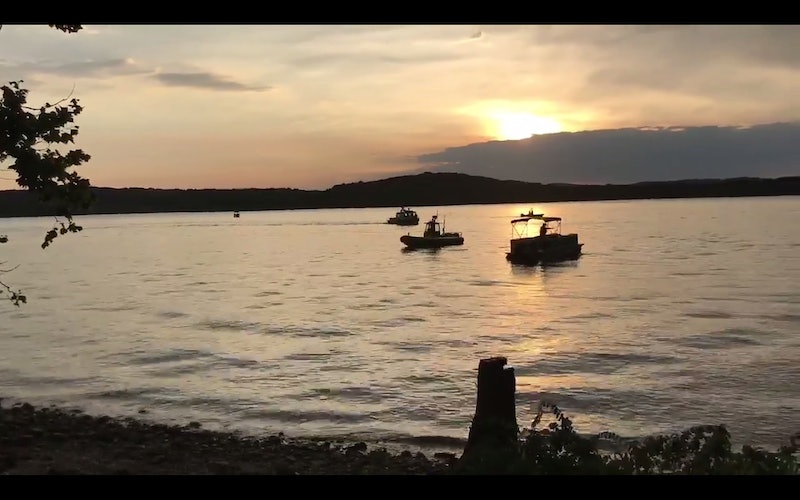 A tragic accident took place at a Midwest tourist destination on Thursday night. A sudden storm in Missouri sank a duck boat carrying 31 passengers, killing at least 13 people, including some children, officials told CNN. While passengers were taking what was supposed to be a fun-filled boat ride on Branson, Missouri’s, Table Rock Lake through the tourist company Ride the Ducks Branson, high winds made the water choppy and violent. Divers were still looking for a few people who went missing after the accident the morning after.

The president of Ride the Ducks Branson’s parent company, Ripley Entertainment, spoke out soon after the capsizing and claimed the storm that sank the boat “came out of nowhere.”

Local news station WTKR reported that company president Jim Pattison Jr. said that the water was initially calm when the boat went out on the water. “Partway through coming back is when … the waves picked up and then obviously swamped the boat,” Pattison told reporters. Fourteen people survived the accident, Stone County Sheriff Doug Rader told CNN.

The company issued a statement on its website on Friday morning that said:

We are deeply saddened by the tragic accident that occurred at Ride The Ducks Branson.

This incident has deeply affected all of us. Words cannot convey how profoundly our hearts are breaking. We will continue to do all we can to assist the families who were involved and the authorities as they continue with the search and rescue.

The statement also announced that Ride the Ducks would be closed for business while the investigation was happening — partially to allow time for the families to grieve, local TV station WTKR reported.

Missouri Governor Mike Parson tweeted about the incident on Thursday night, saying he was "very sad to hear about this horrible accident." He said he was sending "prayers for all those involved and the first responders who are assisting."

Onlookers in another large cruise vessel on the lake watched and captured video of two smaller duck boats struggling leading up to the fateful incident. A woman posted footage of the boats on the turbulent waters, which was widely shared by outlet’s such as The Kansas City Star, on her Facebook page. The post is no longer available.

Sheriff Rader said that there were life jackets in the boat at the time it sunk, but he told CNN he wasn’t sure if passengers were wearing them.

Although the Ripley president said the storms seemed unexpected, NBC News reported that storms were in the forecast for the area.

“There was one line [of storms] that already moved through earlier in the afternoon, and then that second line starts coming in around 5, 6 o’clock and by 7, right on top of Branson,” NBC News' Al Roker said. “Moved through quickly, but boy, the damage was done.”

A CNN meteorologist, Taylor Ward, also reported there'd been extensive damage in the county, with plenty of trees down and some structural damage. A severe thunderstorm warning was issued in the area shortly before 6:30 p.m. C.T, according to CNN. That was about half an hour before the boat capsized.

Users on Twitter are extending condolences, but are also questioning why the boat was on the lake and when weather warnings had already been put out. One user, Derick Fabert said that those managing the duck boats should be held accountable for what happened.

And he captured what many in America were feeling, calling the tragedy "senseless" and "sad."

More like this
How To Follow The New Royal Family Social Media Accounts
By Sam Ramsden
Adele’s Boyfriend Was “Livid” Over This Fan Interaction At The Singer’s Show
By Sophie McEvoy
Adam Driver & Joanne Tucker’s Relationship Timeline Starts With Cheese
By Jordyn Tilchen
'Waterloo Road' Is Back, With More Than A Few Familiar Faces
By Sam Ramsden and Vivian Iroanya
Get Even More From Bustle — Sign Up For The Newsletter