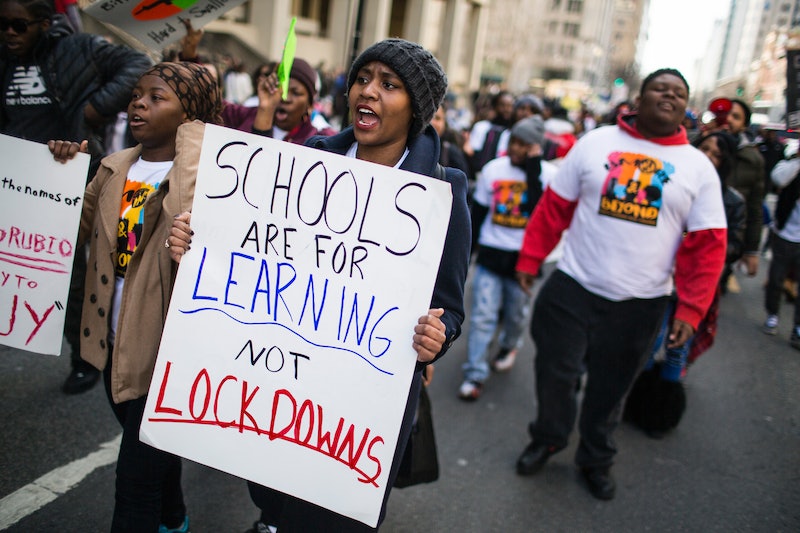 On Tuesday, the Florida Senate passed a school-security bill which includes a pretty controversial provision. The Florida bill allows teachers to be armed at school, pending whether or not that teacher's school board decides that this is a necessary action. This provision has been a point of conflict for gun rights and gun safety activists ever since the shooting at Parkland — and it looks like the controversy might be in the sunshine state to stay.

According to The Wall Street Journal, Republican Senate President Bill Galvano said after the bill passed:

Seconds matter when stopping an active shooter. This legislation will ensure willing school personnel, including classroom teachers, have the training and resources they need to stand as the last line of defense between an innocent child and a violent criminal assailant.

The bill is technically an add-on to a bill that Florida passed last year that enacted a number of gun restrictions, including raising the purchase age for firearms to 21 years old. The bill contained both progressive and conservative policies, and this new school-security provision is no different. Per The Wall Street Journal, it includes the very conservative policy of arming teachers, but it also includes other more progressive provisions, including increased availability of mental health services for students, and the requirement that schools undergo improvements to the "physical security" of their campuses, among others.

According to The Sun Sentinel, the rules around the provision for arming teachers is clear on the stipulations: Teachers in the state are not going to be forced to carry guns, nor will they be immediately authorized to do so, either. First, their school board would have to authorize it, and after that, any teachers who choose to be armed will have to undergo a psychological evaluation and complete at least 144 hours of training.

The provision is technically an expansion of the Coach Aaron Feis Guardian Program, which was implemented in Florida last year and allows non-instructional employees to voluntarily arm themselves if they undergo training. Per The Sun Sentinel, 25 districts in Florida have since opted into this program. However, the Guardian Program didn't allow in-classroom teachers the option to arm themselves, according to The Tampa Bay Times; that's where this new provision will come in.

Several Florida senators spoke on the Senate floor about the vote on Tuesday. Per The Sun Sentinel, Sen. Bill Montford, a Democrat, argued on the Senate floor that teachers shouldn't have to add a new responsibility on top of their workload. He said, “What we are telling teachers [is] if you want protection for you and your children then you do it yourself." On the other side of the aisle, Sen. Ed Hooper said, "I must err on the side of saving a kid."

Sen. Lauren Book, a Democrat, spoke on the Senate floor for over 20 minutes about how conflicted she was on this vote. According to The Sentinel, this was largely because she had seen footage of wrestling coach Chris Hixon looking for a weapon before he bravely stepped into the fray during the Parkland shooting; Hixon lost his life that day. Book, who eventually decided to vote against the bill, said that it was an “exceedingly painful vote.”

The school-security bill will now head over to the Florida House. If it passes there, too, Gov. Ron DeSantis has said in the past that he plans to sign it into law.

More like this
Marcus Mumford, Open Book
By Ilana Kaplan
Ghislaine Maxwell Is Serving Her 20-Year Prison Sentence In Florida
By Gretchen Smail and Brad Witter
Prince William Condemns “Unacceptable” Comments Made To A Black Guest At Buckingham Palace
By Shahed Ezaydi
Matt Hancock Broke a Major Rule With I’m A Celeb
By El Hunt
Get Even More From Bustle — Sign Up For The Newsletter