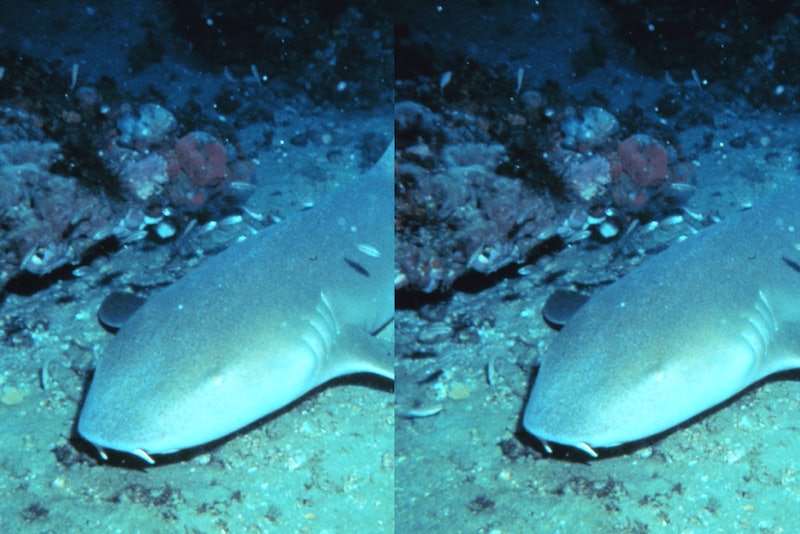 Sharing the water with various sea creatures in tropical locations is often touted as a once-in-a-lifetime experience, but one woman had an experience to avoid at all costs. While on vacation in the Bahamas, a woman was bitten while swimming with sharks as she tried to snap a few photos for her Instagram page. She’s fine — the incident occurred back in June, according to BuzzFeed, and the bite has been well cared for — as are the sharks, but let this be evidence of the fact that there are limits as to what one can and should do for the ‘gram.

Katarina Zarutskie, a 19-year-old Instagrammer, model, and student at the University of Miami, was visiting Staniel Cay in the Bahamas while on a trip with her boyfriend and his family, reports the BBC. Originally from Laguna Beach, Calif., she’s well versed in water activities — so when she saw an opportunity to get in the water with some nurse sharks at a marina, she seized it immediately. “From my previous knowledge from surfing and scuba diving, I know nurse sharks are usually very safe,” Zarutskie told the BBC, adding, “I’ve seen countless photos of people with them on Instagram.” Indeed, as BuzzFeed notes, swimming with nurse sharks is a common tourist activity in the Bahamas.

But while nurse sharks, which are slow-moving bottom-dwellers, are typically harmless to humans, that doesn’t mean that they won’t ever bite a human. As National Geographic points out, they can be big; adults average between 7.5 and nine feet at weights of 165 to 230 pounds, according to the National Aquarium, but they can also grow as large as 14 feet. They also have strong jaws full of sharp teeth, as sharks tend to do. What’s more, even though they’re usually pretty docile and won’t attack unprovoked, nurse sharks will bite to defend themselves if they’re disturbed — for example, if a diver accidentally steps on one, you can probably expect the shark to bite back.

David Hocher, who owns Staniel Cay marina, also told NBC News that nurse sharks “can and do bite on occasion… normally when they mistake a hand or fingers for a piece of food.” This may have been what happened in Zarutskie’s case; Hocher said to NBC News that the photos looked like they may have been taken during feeding time. Hocher has signs present in the marina which note that nurse sharks can and do bite; the signs lay out the marina’s policies concerning visitor interactions with the sharks and impart important safety do’s and don’ts. (Zarutskie says that she didn’t see the signs, according to NBC News.)

In any event, when Zarutskie got in the water, her boyfriend’s father began snapping pictures for her. According to the BBC, someone who was watching from the pier suggested that she lie back and float; as soon as she laid her head back in the water, however, a shark bit her arm. “He had my wrist in his mouth and I could feel his teeth sinking into my arm,” she told NBC News. “I was pulled underwater for a few seconds and then ripped my wrist out of the shark’s mouth as fast as I could.” After she pulled her arm out of the shark’s mouth, she stood up, raised her arms to prevent the blood from the bite dripping into the water and attracting the sharks, and got back to the pier.

Zarutskie was able to get her wound taken care of at a clinic near the marina, reports NBC News, although she ended up returning to Florida the next day to receive additional treatment at home. She told BuzzFeed that the experience was “a big learning lesson,” and that she would caution anyone else planning to swim with sharps to “be smart about it.” As she put it, “You are in their home.”

It’s probably also worth remembering another important lesson, too: Just because you see something on social media all the time necessarily doesn’t mean that it’s easy to pull off. Selfie-related injuries and even deaths do occur with some degree of frequency; indeed, data scientists began studying them in 2016 and found that they’ve been growing with each passing year: In 2014, 15 people died while taking selfies; in 2015, the number more than doubled, rising to 39; and the first eight months of 2016 saw 73 selfie-related deaths occur. Doing it for the ‘gram is all well and good, but do it smartly, and do it safely — and if you have any doubt, there’s no shame in passing on it entirely.