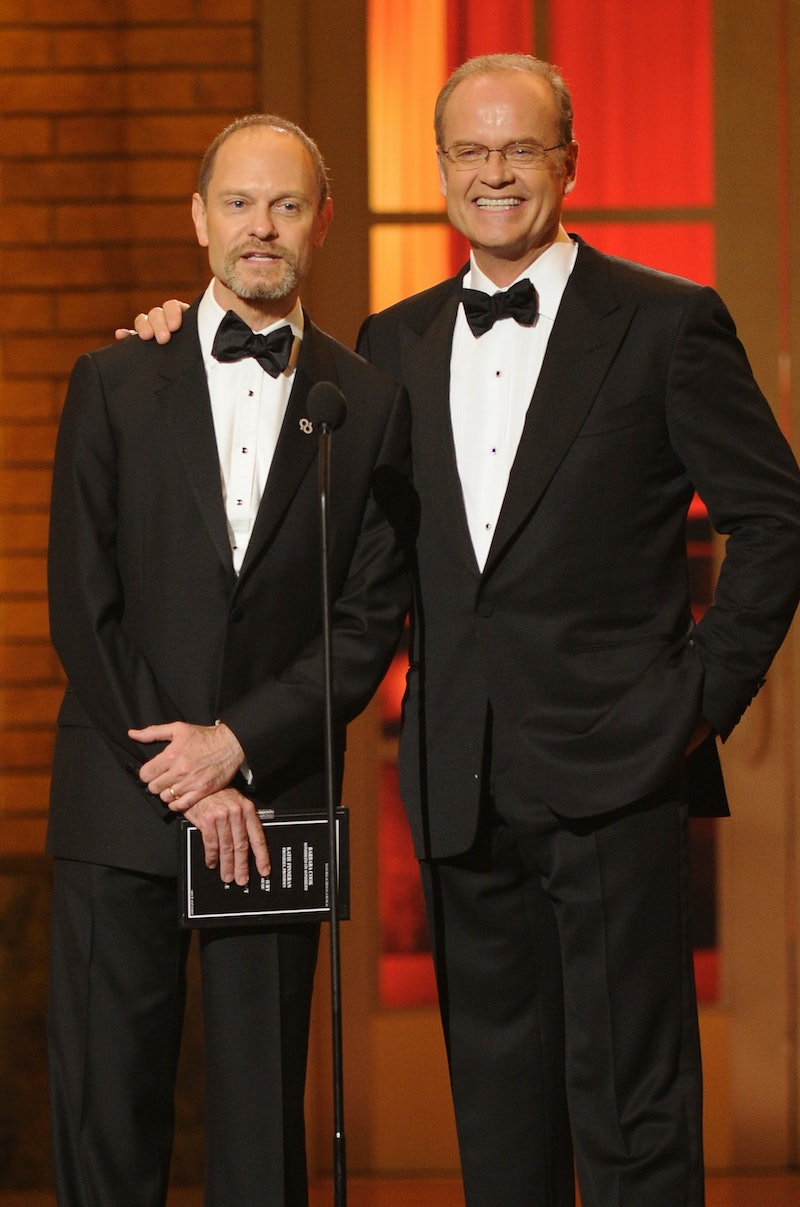 Those tossed salads and scrambled eggs may be callin' again. Just more than 14 years after "snooty but lovable" radio psychiatrist Dr. Frasier Crane said his final goodnight to Seattle, a Frasier reboot is in the works, Deadline reported on Wednesday, July 25. According to the website, Kelsey Grammer, the titular star and executive producer of NBC's '90s comedy "is fielding interest to put together a new Frasier series." (Bustle reached out to Grammer's rep and the Paramount Network for comment, but did not receive a response.)

Per Deadline, a new possible incarnation of the show that ran for 11 seasons, from 1993 to 2004, will follow a slightly different script than the recent revivals of shows like NBC's Will & Grace, ABC's Roseanne and this Fall's return of Murphy Brown on CBS. Instead, "Frasier is envisioned as a reboot, likely set in a new city, with the title character, played by Grammer, as a possible link to the Emmy-winning 1993 series."

As fans remember, Frasier — a spinoff of NBC's Cheers — ended with the suggestion that Dr. Crane may have unexpectedly relocated to Chicago to be with his love Charlotte, played by Laura Linney, who won an Outstanding Guest Actress in a Comedy Series Emmy in 2004. Might the new series follow the opera-loving wine connoisseur to Chi-Town? That certainly could be one possibility.

While the reappearance of Niles (David Hyde Pierce), Daphne (Jane Leeves) and Roz (Peri Gilpin) seems to be uncertain, the new series would definitely be absent of Frasier's beloved father Martin Crane, played by the late John Mahoney who died at age 77 in February.

Prior to Mahoney's death, the Frasier cast had been discussing a reunion, according to Entertainment Weekly. “Certainly people who were in favor of it loved the idea of John being a part of it because he was so much of the balance of the show,” co-executive Producer Christopher Lloyd told EW. “You have these two stuffy intellectuals and a dyed-in-the-wool man of the people. That just provided so much balance in the show so it would be a little hard imagining to do it without him.”

Even so, Lloyd said he believed that Mahoney would have wanted the show to go on without Marty and his iconic eyesore recliner. (Though fans would expect them to at least pour out a can of Valentine for the Crane patriarch at McGinty's.)

As with any piece of nostalgia, fans have strong opinions about reviving the iconic series. While many are already pouring their glasses of celebratory Sherry, and some seem a bit confused, others can already feel the blues a-callin'.

While one Twitter user called it "the best news I have heard in a long while," in other cases, fan excitement over the Frasier reboot news could only be expressed via GIFs.

Some fans implored Grammer to not mess with perfection, with one user joking, "You might as well try to reboot the Sistine Chapel."

Playfully referencing a speech in "Frasier Crane's Nightmare Inn" from Season 4, another user pondered why we can't leave the original alone.

Many comments mentioned the absence of Mahoney's Marty Crane. One Frasier fan said he adores that show but, "Without John Mahoney, I don't see the point." Another went so far as to joke that anyone who proposes a reboot "without John Mahoney should definitely be on trial at the very least." A third user said he'd only be on board "if it's Daphne trying to communicate with the ghost of John Mahoney."

One fan on Twitter thought the plot might be too predictable: "Frasier returns to Seattle yada yada yada podcast host, son is now a jock, yada yada yada"

To combat any threat of predictability, other fans had their own plot suggestions though. Examples included Frasier's son Frederick having to care for his ailing father, the show taking place in Austin, and Frasier having a podcast and spending his days responding to YouTube trolls.

Whether or not a Frasier reboot actually happens, it's an exciting prospect for fans to debate a la Frasier and Niles over a cappuccino from Cafe Nervosa.