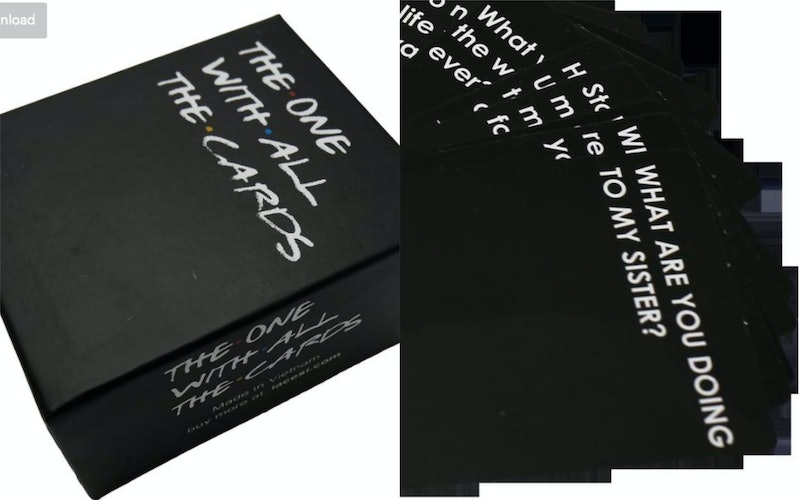 If you already planned the lineup for your upcoming game night, you may want to PIVOT!!!! immediately, because the best game of all time has finally arrived. Etsy seller @DaisystoreGifts created a Friends-themed Cards Against Humanity-inspired deck, meaning your favorite guilt-inducing game just met your favorite childhood show and had one heck of an emotionally confusing baby. All of this is to say — if you had a shred of innocence left, I'm pretty sure this game is the universe's way of letting you know it's time to let it go.

The One With All The Cards
Etsy

What makes this game even more appealing is that, even with 99 "gray cards" (aka, the card prompts) and 180 "white cards" (the cards you use to answer the prompts), the game is only $5.99 on Etsy, and can be instantly downloaded from a PDF. That means there's no chance of it selling out, no big long wait for it to show up at your door, and you'll probably only cry about the printer not working four to six times, max. (I will be avenged.)

Plus, if you really want to fly a little too close to the nostalgic sun, the same Etsy shop is also carrying a Harry Potter deck — meaning you can pair your favorite sitcom with the Wizarding World. Maybe today is the day Hermione Granger asks Viktor Krum, "How you doin'?"; the day Ron Weasley takes all of Rachel's bajillion-layer nightmare trifle to the face; the day Ross Geller finds out he's a squib. The possibilities are as endless as they are slightly terrifying.

In the meantime, we know at least two of the cards in the Friends pack include "Drinking a gallon of milk in ten seconds" and "WHAT ARE YOU DOING TO MY SISTER?", and if those two reasons alone aren't enough for you to shell out your hard-earned millennial dollars on this pack, well, perhaps it is because you're job's a joke, you're broke, and your love life's DOA. (Sorry.) If you do choose to purchase the pack and bust it out at your next game night, just remember that we will definitely all be answering to whatever higher power judges us for playing Cards Against Humanity and all of its spin-offs iterations when we die.

More like this
'Friends' Creator Marta Kauffman Opened Up About Misgendering A Guest Character
By Grace Wehniainen
15 Years Of The iPhone, In Pictures
By Emma Carey
How to Delete (or Pause) Your Hinge Account
By Emma Carey
How To Protect Your Digital Privacy If You Need An Abortion Post-Roe
By Kaitlyn Wylde
Get Even More From Bustle — Sign Up For The Newsletter