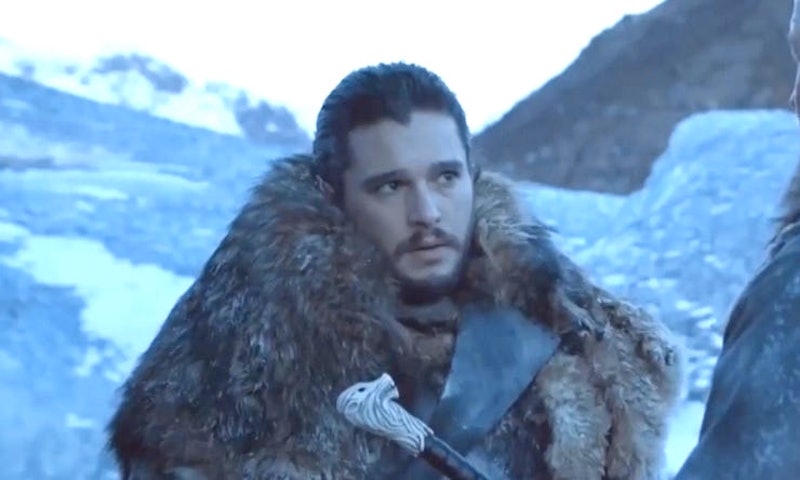 If there's one thing that all Game Of Thrones fans are, it's detail oriented. So, obviously, after Season 7 Episode 6, fans took to social media to discuss a new theory that the direwolf pommel on Jon Snow's sword, Longclaw, opened its eye during a scene. However, Alan Taylor, the Game of Thrones episode's director, debunked the Longclaw theory, saying to Insider, "I haven't got a clue what they're talking about." In this case, it appears that fans were more creative than the show's creators thought to be.

The Longclaw eye theory was a bit half-baked anyway, so this probably isn't a huge disappointment to the theorizers. However, fans should be commended for their creativity, because, even with the smallest detail, they were able to conjure up important plot points. And it makes sense that viewers were watching closely, because the supposed eye-opening happened during a tense moment when Jon Snow was fighting wights underwater. Right as he emerged from the water, the sword's eye seemed to open, suggesting either that it had a consciousness and it saved Snow or that it is able to detect whether he's alive or dead.

"So either this sword is magic and it's doing stuff on its own or something happened," Taylor acknowledged. "I'm going to have to go back and watch that moment close up and in slow motion to see what's going on there. [But] I can say that there was no intention for that to be the case."

Apparently, sometimes even Game Of Thrones, which we have been taught to watch like a hawk (or Three-Eyed Raven), has minor moments that don't actually mean anything bigger for the show at all. In order to make Jon Snow look extra cold, the "frost effects" were turned up, and that's likely what inadvertently caused the eye-opening effect.

"There was a lot of conversation about frost because he climbs out of the water and collapses on the ice and there's a slight time cut, so when we see him staggering to shore he's frosted up and not wet anymore because everything freezes that fast," Taylor told Insider. "So I know there was discussion about starting to show that process, and so they probably amped it up and used whatever they could to show the shift."

Ah, well. Game Of Thrones is such a major phenomenon because of both its amazing visuals and its exciting, intricate plot. It was only a matter of time before the special effects would cause some kind of inconsistency that, in classic GoT fandom fashion, would then develop into a complicated fan theory.