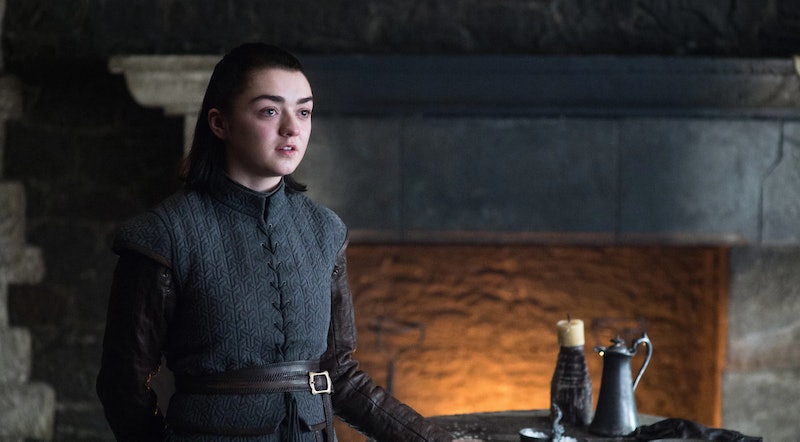 Ready the dental floss, because there are some more details regarding production on the first post-Game of Thrones spinoff to chew on. According to a new report from the Belfast Telegraph, the Game of Thrones prequel began filming in “a remote secret location in Co Down and on the north coast last week." The outlet also reported that production was also getting started at Belfast's Titanic Studios.

Just as HBO told Entertainment Weekly back in February, production on the Game of Thrones prequel reportedly really did began this summer. And heck, it might've even started a little earlier? Per a report from The Sun, it looks as though filming on the first followup to Thrones has been underway in Northern Ireland since May. Moreover, fan site Winter Is Coming has rounded up a bunch of photos of the GoT prequel sets that've already made their way onto Twitter, some of which that have apparently been up since last month. All that's to say the first Game of Thrones prequel before you can say "I dracarys and I know things."

This is a homecoming of sorts for the franchise. A significant chunk of the original Game of Thrones series was filmed in Northern Ireland, including but not limited to scenes set in Winterfell, Castle Black, and Walder Frey's Twins. The characters, time period, and battles may be different, but the filming locations will will ring a bell or two. (Not the surrender kind, but the recognition kind.)

The eighth and final season of Game of Thrones ended in May, but that series finale was not the end of the TV franchise. There are at least three Game of Thrones "successor shows" currently in the works, and a program that goes by both the unofficial title The Long Night and the working title Bloodmoon is the first of the three.

“We have had five different GAME OF THRONES successor shows in development (I mislike the term “spinoffs”) at HBO, and three of them are still moving forward nicely. The one I am not supposed to call THE LONG NIGHT will be shooting later this year, and two other shows remain in the script stage, but are edging closer. What are they about? I cannot say. But maybe some of you should pick up a copy of FIRE & BLOOD and come up with your own theories.”

After you have picked up a copy of Fire & Blood, you might as well take a look at the HBO site's synopsis of the prequel:

"Taking place thousands of years before the events of Game of Thrones, the series chronicles the world’s descent from the golden Age of Heroes into its darkest hour. From the horrifying secrets of Westeros’s history to the true origin of the White Walkers, the mysteries of the East to the Starks of legend, only one thing is for sure: It’s not the story we think we know."