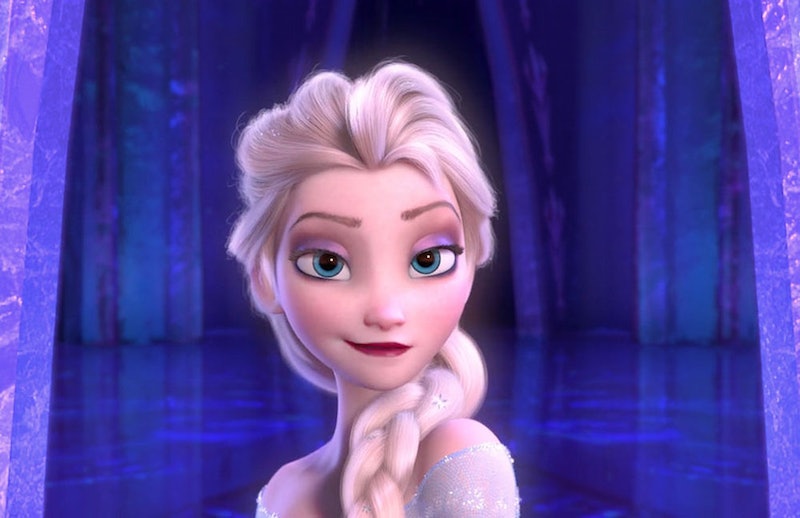 There really is nothing like a Disney movie. The happy endings, all the lovely songs, the bright colours, and of course the lesbian storylines. OK, hold up. What? Yes, you heard me right. With a pleasantly surprising recent You Gov poll showing that 49 percent of the Brits questioned would be happy with a lesbian Disney princess, it begs the question: is it time for Elsa, Moana, or Merida to get a girlfriend?

Disney movies have long been queer fan favourites. I mean what's not to love about all those catchy show tunes, bright colours, tales of the underdog coming through in the end, and guaranteed happy endings (not that kind of happy ending)? However, LGBTQI+ fans like myself have long felt ignored and under represented by their beloved Disney classics. Recently however, the guys over at Mickey Mouse HQ decided that instead of having heaps of thinly veiled queer characters that they would go on ahead and have an actual, real, openly queer character. This came in the guise of LeFou, Gaston's fawning manservant in the recent reboot of Beauty And The Beast. But it was still only one minor character, and many Disney fans were left hungry for more.

If you ask me, Lefou was clearly gay and totes crushing on Gaston in the OG edition of Beauty and the Beast. Also, as I mentioned before, there have been heaps of clearly gay characters and one particularly clear lesbian character in the Disney archives. I don't mean to be the kind of person to out someone but come on Elsa, you are almost definitely a lesbian. And a big one at that. Everything about Frozen's protagonist says feminist queer icon. A huge secret she has to keep inside? Check. Huge relief when her secret is revealed? Check. Don't need no man? Check check check. So many people felt that she was obvs a lez that #GiveElsaAGirlfriend became a huge thing on Twitter, with many people pointing out how important it would be for our community, especially for queer kids, to see themselves represented on screen.

In a recent interview with HuffPost, the film's writer Jennifer Lee alluded to being open to giving Elsa a girlfriend. She told the publication:

"Where we’re going with it, we have tonnes of conversations about it, and we’re really conscientious about these things. For me [...] Elsa’s every day telling me where she needs to go, and she’ll continue to tell us. I always write from character-out, and where Elsa is and what Elsa’s doing in her life, she’s telling me every day. We’ll see where we go."

Although I'd love for the number of people who would be happy to see a gay Disney princess to be higher than YouGov's 49 percent, it really is wonderful to see that people are getting increasingly fed up with heteronormative images on their screens.

Well, as a lesbian, do I think that it's time for a gay Disney Princess? In short, yes and no. Yes, it is super great to know that openly queer characters are being talked about over at Disney towers (which BTW has a perfect rating on the corporate equality scale) and who flipping knows, Elsa may well get her girlfriend. But the thing is, what's wrong with a Disney princess who just wants to be, well, alone? What if Elsa wants neither a girlfriend nor boyfriend and doesn't need rescuing by anybody, thank you very much. Sexuality is kinda the tip of the problematic iceberg here.

As well as a queer icon, Elsa is a feminist icon, who is doing a great job on her own. So, the argument of her or any Disney princess getting a girlfriend being the most important thing seems wrong to me. Why are kids of any sexuality or gender being taught the only way to be happy is to have a partner? That is hella effed up. Look at Ariel in The Little Mermaid for gawd's sake. She gave up her amazing voice and life under the sea so she could get legs and hang out with some guy. Jeez. That is just about the worst message ever.

Disney's first official openly gay character — who is yet to be named — was announced earlier this month in the upcoming film Jungle Cruise, reports The Sun. Jack Whitehall has signed up for the role, and will star alongside Dwayne "The Rock" Johnson and Emily Blunt in the feature, which is apparently based on the Disneyland ride Jungle Cruise (hence the name), "where a small riverboat takes a group of travelers through a jungle filled with dangerous animals and reptiles, but with a supernatural element." However, the Whitehall's character is not the lead, and some are not happy with the fact that an actor who identifies as straight is playing Disney's first gay character.