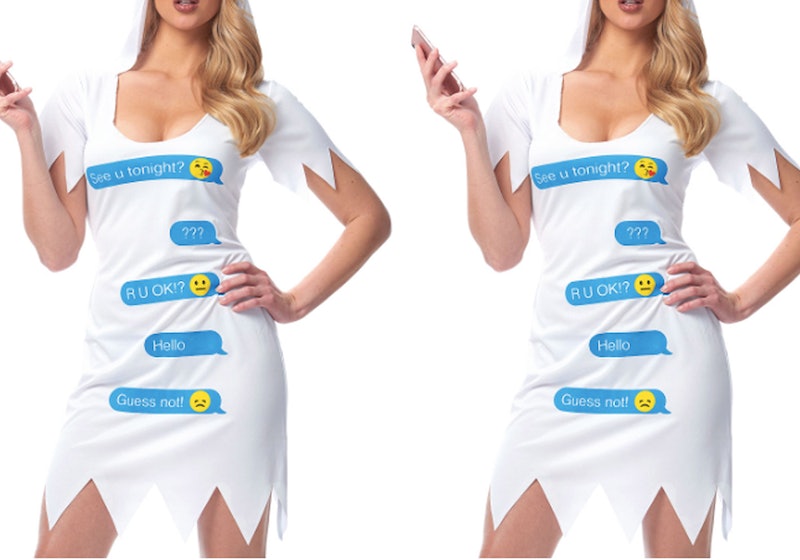 While it's impressive that the basic white-sheet/holes-for-eyes ghost costume has managed to remain a constant representation of a classic Halloween ghost costume for so many decades, there's a new "ghost" costume in town — and most Millennials will probably agree it's a fitting representation of 2018. Party City debuted a "ghosting" Halloween costume, which is part "boo" type of ghost and part "the-person-you-went-on-two-great-dates-with-has-stopped-responding-to-all-texts" type of ghost.

That's right: With a millennial twist, the Halloween costume-slinging superstore is selling a ghosted costume that's going to haunt you with its sheer relevance. The OG basic ghost costume has received a contemporary makeover that's a much spookier reflection of Millennial dating culture.

If you've ever experienced the shocking and heart-wrenching dating phenomenon ghosting — in which the person you're talking to just disappears without taking the time to let you know they're no longer interested — this costume probably makes a lot of senseAccording to the costume's description on the Party City website, this is a costume created for (comedic) revenge.

"If someone's blowing up your phone, ghost them in a Ghosted Costume."

This basic white dress includes a few exponentially #relevant unanswered texts, like the classic "???," which we've all sent to someone when we literally have no words to express our confusion regarding their behavior. There's also the "R U OK!?," which you send to someone when you're worried, but also incredulous over their behavior. It's like, I'm worried that something happened to you physically, but I'm also worried you're not a good person. And then of course the "Guess not," which is like the absolute final text message you send someone before writing them off as a ghost. It's a rhetorical statement, but what you're really saying when you say "guess not" is "please respond to this string of unanswered texts with some very believable excuse that will ease the disappointment and revive my faith in humanity."

But if you read the product description too quickly, you might miss this:

"Eager texters will know not to bother you in this Ghosted Costume!"

This implies that you're the one doing the ghosting if you're wearing the costume. But, I actually think this costume is a bit more sympathetic than that: if you were the one ghosting someone, the messages wouldn't be iMessage blue, and they'd be situated on the other side of the "screen" on the dress. Blue messages coming from the right side of the screen would be your messages. So, really, it seems like Party City isn't selling a ghost-er costume, they're selling a ghost-ed costume, which could easily be misinterpreted. This is a costume that goes out to all the people who have been disregarded and ghosted!

So, if you're looking for a costume that's scary in a "OMG what is wrong with people?" kind of way, this one will probably work. Also, it's still technically a "ghost," so you're still in the Halloween spirit if you think about it.

Check out the costume over at Party City.