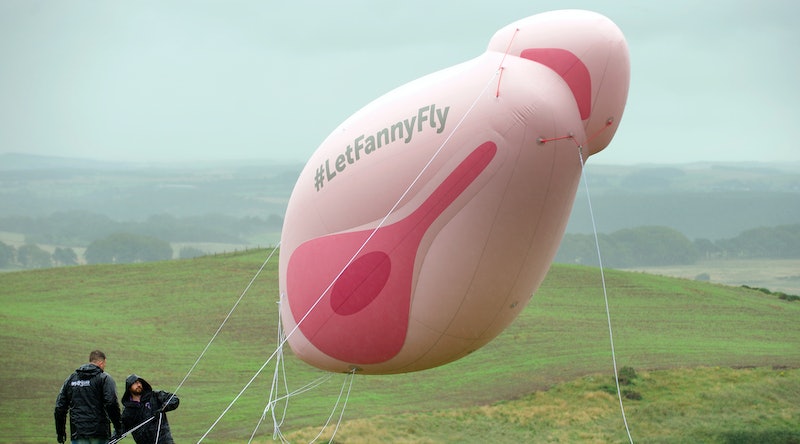 The world famous Edinburgh Fringe Festival is in full swing. Meaning a whole host of incredibly exciting performances and projects are going at it full throttle. However, along with reviews of the shows and the festival's general merriment making headlines, reports that the Edinburgh Fringe has allegedly banned a giant vagina blimp commissioned by women's health and wellness brand Elvie have also been getting a lot of attention. So let's dig in and see what's going on.

In a press release sent to Bustle UK, Elvie have said that their campaign, which was "designed to raise awareness around pelvic floor health," has been "banned from sponsoring Edinburgh Fringe this weekend."

"The original plans included a pop-up on the Royal Mile — the Fringe’s main thoroughfare — but the design was deemed 'not suitable' at the last moment due to a representation of a vagina on the exterior of the structure. Elvie had also commissioned a vagina-shaped blimp to be tethered in Festival Square. The 19ft blimp was designed to encourage people to visit a hashtag [#LetFannyFly] where they would find educational content around pelvic floor weakness, which can lead to incontinence. But, this too was ‘shot down’ by the Council. The blimp now sits in a field half an hour outside the city, just waiting for the opportunity to fly."

In response to this alleged ban, Elvie have launched a campaign to get their blimp to the Fringe. "You can help us get Fanny soaring today by signing our petition in the link in our bio and using the hashtag #LetFannyFly on your own social channels to spread the word," they wrote on their Instagram. As well as this, they have started an online petition with Change.org.

However, I reached out to the Edinburgh Fringe Festival press team to see what they had to say on the matter, and they responded:

"The Fringe Society have been liaising with a third party agency over the past few months regarding a space for Elvie on the High St and at no point have we banned them from participating."

The Fringe Society stated that the difficulty is due to the proposed location. "The space in question is located right next to St Giles Cathedral and — alongside colleagues in City of Edinburgh Council — we have to consider the interests of multiple stakeholders when considering what activity can take place in that location," they said in their statement to Bustle UK.

They finished by saying:

"We have been supportive of Elvie’s initiative from the outset, and have offered their agency multiple alternatives (both in terms of separate sites across the Fringe and different ways of organising their stand on the High St), but sadly have not been able to reach an agreement with them to date. The Society remains open to discussions with Elvie to try and find a way forward that suits both parties."

Only time will tell if Fanny will fly, but one positive to be taken away from this whole debacle is that it will hopefully still get people talking about women's health and, in particular, female incontinence.