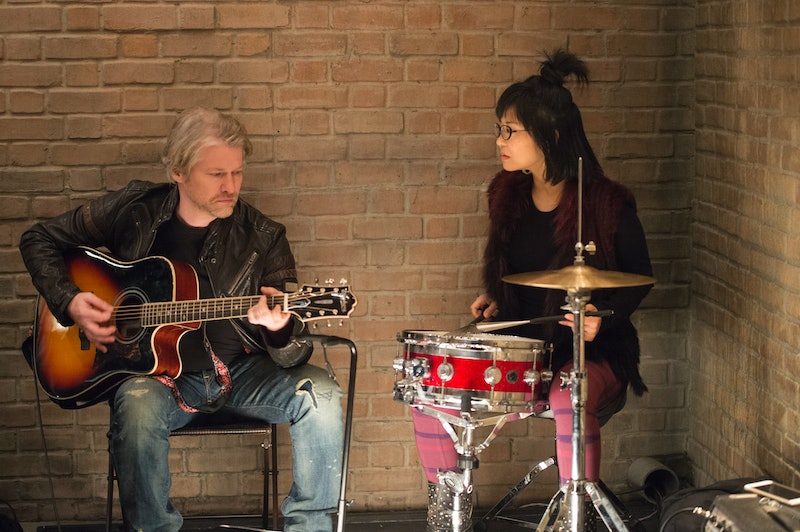 Gilmore Girls may not have actually been a proper musical television series like Glee or Crazy Ex-Girlfriend, but music is deeply embedded within the show's DNA, from the "Where You Lead" theme song to the folky, lullaby-like sounds of "la-la-las" backed by an acoustic guitar filling each episode. Not to mention, when you have Lane (Keiko Agena) in a band, a cameo from The Bangles, and Lorelai's (Lauren Graham) dog named Paul Anka, you know that music is incredibly important to this show and its characters. So will the Gilmore Girls revival have a soundtrack and prove to be just as musical as its predecessor?

It looks like there are no plans to make a soundtrack for the Gilmore Girls revival available, or if there are, they haven't been officially announced. It's unclear if something like that actually will come to fruition once the series bows on Netflix on Friday, Nov. 25. I definitely wouldn't rule out the possibility of a new Gilmore Girls soundtrack, especially when it seems like any TV show that features music in the slightest makes its tunes available to the masses these days. However, the fact that the show released only one soundtrack during its original 2000 to 2007 run, 2002's Our Little Corner of the World: Music from Gilmore Girls, doesn't exactly make me super confident that another soundtrack will be on the way. But with so much Gilmore Girls hysteria these days, who knows?

Music will definitely play a big part in the Gilmore Girls revival. With this kind of pedigree, how could it not? Sam Phillips returned with her "la-la-las" and "ba-ba-bas" to pen and perform the score to Gilmore Girls: A Year in the Life, according to Vulture's review of the series. “Sitting down to write, I felt like it was so easy to compose the music just because I did it for so long and really got to know the characters and the series really well, so it came about very naturally,” Phillips told Vox about composing the score earlier this year. Vox also reported that Phillips' music will feature "both familiar and new material."

And after much teasing, it appears that Lane's band, Hep Alien, will be back together in the Gilmore Girls revival, according to The Washington Post's review of the new series. There's also a glimpse of Lane at the drumming on the skins in the trailer for the new show, which you can see below. The actors who played the Hep Alien band members in the original series (Agena, Todd Lowe, Sebastian Bach, and John Cabrera) have all been confirmed to appear in the revival, Entertainment Weekly reported in April. You can't have all these musicians in one room together and not have them do some jamming, right?

Someone who is sure to be doing some rocking out in Gilmore Girls: A Year in the Life is the Town Troubadour, who EW reports will return to the series. The bespectacled busker provided a soundtrack to the show on the streets of Stars Hollow in the original series, and I can only imagine he'll do the same this time around. Perhaps he'll even get a line or two in between strumming.

Music is even a big part of the plot in one installment of Gilmore Girls: A Year in the Life. Town Selectman Taylor Doose (Michael Winters) decides to put on a musical about the history of Stars Hollow, and it features Broadway mega-stars and Tony winners Sutton Foster and Christian Borle, Variety reports. Though the town's productions don't come close to the musicals we're used to seeing Foster and Borle wow us in on the Great White Way (need I remind you of Miss Patty's 28th annual dance recital?), perhaps they'll help take Stars Hollow's theatrical offerings to the next level.

Of course, what I really want to know when it comes to music in the Gilmore Girls revival is whether or not Carole King and her daughter Louise Goffin's rendition of "Where You Lead" will return to kick off each episode as the theme song. Though the track is featured in the trailer for Gilmore Girls: A Year in the Life, reviews of the series from Vulture and IndieWire state that the ditty is missing from the opening of each of the four installments. However, King will reprise her role as music store owner Sophie Bloom, and she even sings another one of her real-life classics, "I Feel the Earth Move," which doesn't seem to go over as well as she had hoped with the townspeople, according to EW's review of the series.