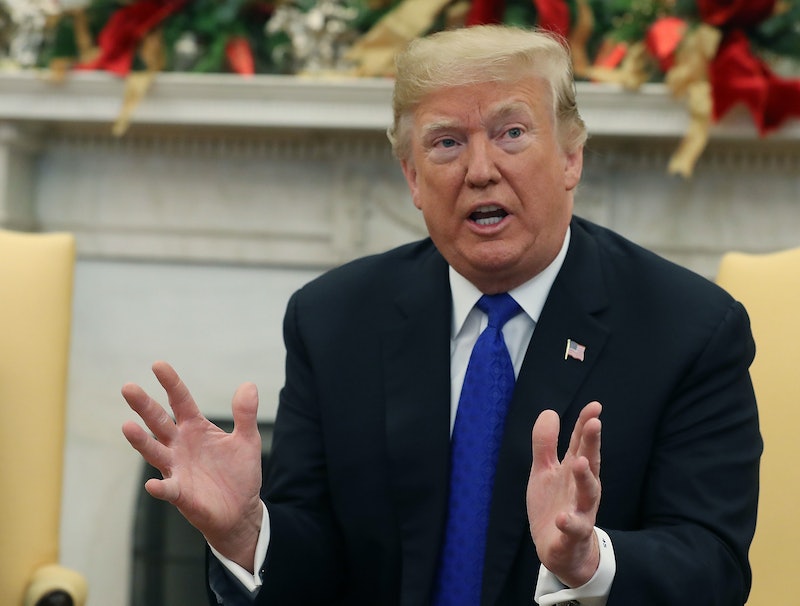 Congress has refused to give President Trump the money needed to build his fabled U.S.-Mexico border wall, but fans of the president's signature proposal shouldn't give up hope just yet: A GoFundMe campaign for Trump's border wall is seeking to crowdfund the project, and it's already raised more than $1 million in a matter of days. Bustle has reached out to the White House for comment on the campaign.

"As a veteran who has given so much, 3 limbs, I feel deeply invested to this nation to ensure future generations have everything we have today," Brian Kolfage, the campaign's organizer, wrote on the crowdfunding page. "Too many Americans have been murdered by illegal aliens and too many illegals are taking advantage of the United States taxpayers with no means of ever contributing to our society."

The GoFundMe faces a steep climb to making its fundraising dream a reality. It's raised $1.4 million so far, and while that's certainly nothing to sneeze at, it amounts to just 0.13 percent of the campaign's total goal of $1 billion. To put it differently: If the campaign were to raise $1 million every day — which would be much faster than the rate it has pulled in money thus far — it wouldn't reach the $1 billion goal until midway through 2021.

But even if that were to happen, the campaign would still be way, way short of the money needed to build a border wall between the U.S. and Mexico. That's because, although there are various conflicting estimates as to what the price tag for a wall would be, just about everyone agrees that it would cost much more than $1 billion.

The Department of Homeland Security estimated in 2017 that the wall would cost around $21.6 billion to build. Senate Majority Leader Mitch McConnell thinks it'll run between $12 and $15 billion, while Congressional Democrats insist it could cost as much as $70 billion to build, plus an additional $150 million a year to maintain. Even Trump himself, who claimed on the campaign trail that the wall would only cost $8 billion, eventually asked Congress to allocate $25 billion for the project in January (Congress refused, hence the GoFundMe campaign).

No matter how you slice it, $1 billion won't be nearly enough to build the wall — which may be why Kolfage, in an interview with Splinter News, said he's trying to get GoFundMe to let him ask for even more ($1 billion is the site's current goal limit).

Even if the campaign were somehow able to raise billions of dollars order to build the wall, it's not entirely clear that the federal government would accept it. On the GoFundMe page, Kolfage acknowledges this, but says the fundraising campaign has "many very high level contacts" helping sort out the legalities, and assures donors that he will "hold all funds and not release a single penny until we have all legal aspects covered to ensure our money goes only to the wall." Kolfage also says that all of the money it raises will be refunded if, for some reason, the campaign isn't able to successfully fund the multibillion-dollar project.

During the campaign, Trump promised his supporters that Mexico would pay for the wall.