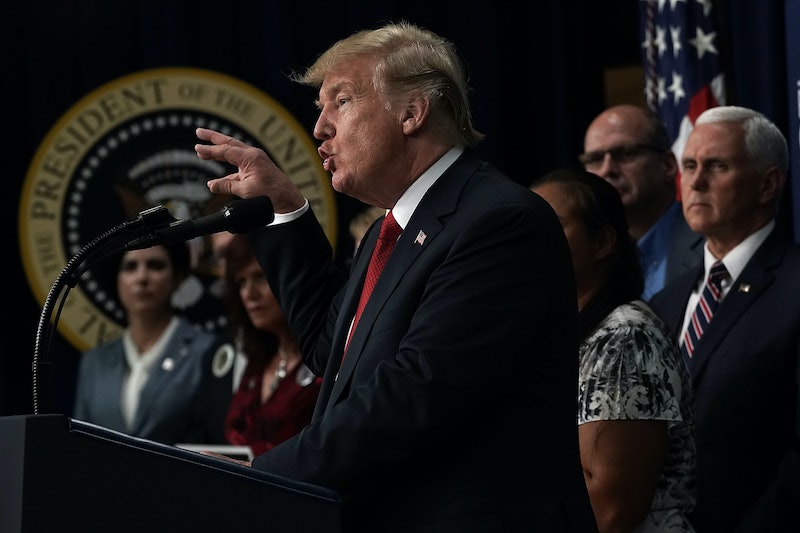 After facing heavy negative publicity over his administration's family separation policy, President Trump decided to shine a spotlight on the (relatively few) violent crimes that undocumented immigrants commit in America. On Friday, President Trump's "angel families" event highlighted the "permanently separated" — that is, Americans who were killed by undocumented immigrants.

“These are the American citizens permanently separated from their loved ones. The word you have to think about is ‘permanently,’” Trump said at the event. “Because they were killed by illegal immigrants. These are the families that the media ignores. This is a very unfair situation.”

All available evidence shows that undocumented immigrants commit significantly less crime than native-born Americans. Trump falsely said that this evidence is "not true" in his speech.

"I always hear that — 'Oh no, the population is safer than the people that live in the country,'" Trump said. "You've heard that, fellas, right? And I say, is that possible? The answer is it is not true. You hear like they are better people than what we have, than our citizens. It is not true."

But it is possible, and it is true. According to the government's own data, violent crime in the United States has fallen by 36 percent since 1980 even as the share of immigrants in the country more than doubled. A 2016 study found that since 1980, violent crime fell in the 10 American cities with the largest increase in immigrant populations.

Nevertheless, Trump found some Americans whose loved ones were killed by undocumented immigrants and invited them to speak at his event Friday to highlight the supposed dangers that immigrants pose to native-born Americans. In addition to inviting those who had been "permanently separated" from loved ones, he recited what he claimed were the raw number of various crimes that immigrants commit every year in the United States. Trump did not, however, provide the crime rates of native-born Americans for comparison.

The phrase "permanent separation" first made the rounds earlier this week in reference to Trump's own immigration policies, which involved separating undocumented children and babies from their parents and putting them in cages. John Sandweg, a former acting director of Immigration and Customs Enforcement, said that some of the the families the Trump administration split up will never be reunited.

"Permanent separation. It happens," Sandweg told NBC News. "You could easily end up in a situation where the gap between a parent's deportation and a child's deportation is years. ... You could be creating thousands of immigrant orphans in the U.S."

Trump and several of the guests he invited to the Friday event uttered the phrase "permanent separation," or some variant thereof, suggesting some degree of coordination between the president and the families he brought on stage.

“We weren’t lucky enough to be separated for five days or 10 days. We are separated permanently," said Laura Wilkerson, whose son was killed by an undocumented immigrant in 2010. "This is permanent separation.”

According to CBS News, family members brought pictures of their deceased loved ones to the event, and Trump autographed them.