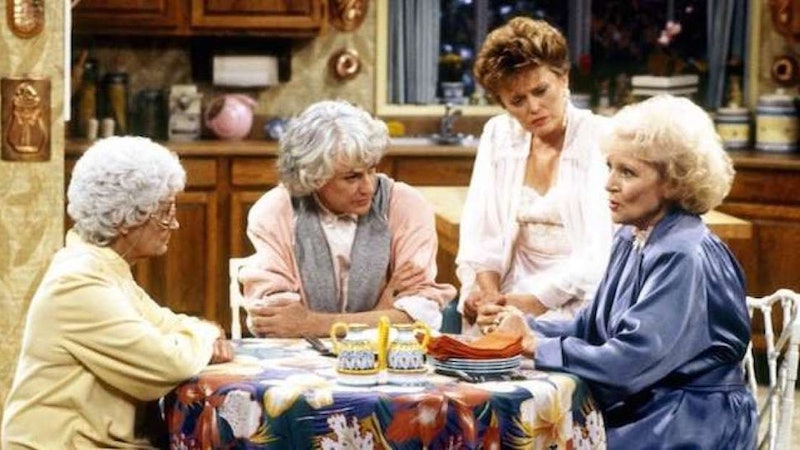 If you want tell your bestie "thank you for being a friend," then you're going to want to invite them on this Golden Girls cruise that, yes, legitimately exists. Dubbed "Golden Girls at Sea," this is the ultimate fan cruise for people who can't get enough of the fantastic four: Rose, Blanche, Dorothy, and Sophia. Setting sail in 2020, the Golden Girls fan cruise departs from Miami, Fla., (obviously) and makes stops in Key West, Cozumel and back again, according to the group organizing the adventure, Flip Phone Events.

Themed cruises are all the rage these days, so it was only a matter of time before the girls got their very own. The Golden Girls cruise includes everything GG fans could ask for. Enjoy a cheesecake party (the gals ate more than 100 cheesecakes during the course of the show), karaoke, trivia, a Shady Pines (where the ladies lived) craft corner, a Key West Golden Girls bar crawl, a "One Night in St. Olaf Dance Party" (where Rose is from), bingo, and more.

Even though Sophia last wise cracked in 1992, Golden Girls has tons of fans who were born after the series finale aired. It's basically the girls from Sex and the City in 30 years after they've moved to Miami, you know, if Miranda was Carrie's mom.

If you can take or leave the Golden Girls, from band-specific cruises to yoga cruises to craft beer cruises, there's something out there for every cruiser. This includes TV-and-film themed cruises. Join a legion of zombies on The Walking Dead cruise. According to Gina Kramer, editor of the website Cruise Critic, "The Walker Stalker Cruise will welcome Norman Reedus (Daryl), Jeffrey Dean Morgan (Negan), Chandler Riggs (Carl), and others who will host a jam-packed week of themed activities."

Music lovers can find their line-dancing sea legs on a country music cruise, rock out on a classic rock cruise, or don leg warmers for an '80s dance party cruise. "80s-lovers can enjoy concerts day and night as well as myriad themed activities such as costume parties, 'Let's Get Physical' aerobics, '80s karaoke, trivia, and Q&A sessions with the artists. There will even be a special visit from Kenny Loggins when the ship is docked in Cozumel," Kramer revealed.

There are also cruises featuring the likes of Kid Rock and Backstreet Boys (not on the same cruise, because that would be weird). Whatever your jam, if you like to cruise, there's def something you're bound to be bananas over.

From Disney to dancing to science to history, there's a themed cruise that will encourage you live out your best vacay fantasies. And if those fantasies include Golden Girls, pack your best Sophia-inspired wig and house dress and head to Miami this time next year.

If you book before March 19, 2019 with Flip Phone, you'll some rad deals like a free classic alcohol package so you can have as many umbrella drinks as you want.

While it doesn't appear that the gals themselves will be sailing with you on the Celebrity Infinity Cruise Ship, the trip will connect you with others who love Golden Girls just as much as you do. So send out an Evite, invite everyone you know, and sign off with the message, "Thank you for being a friend."