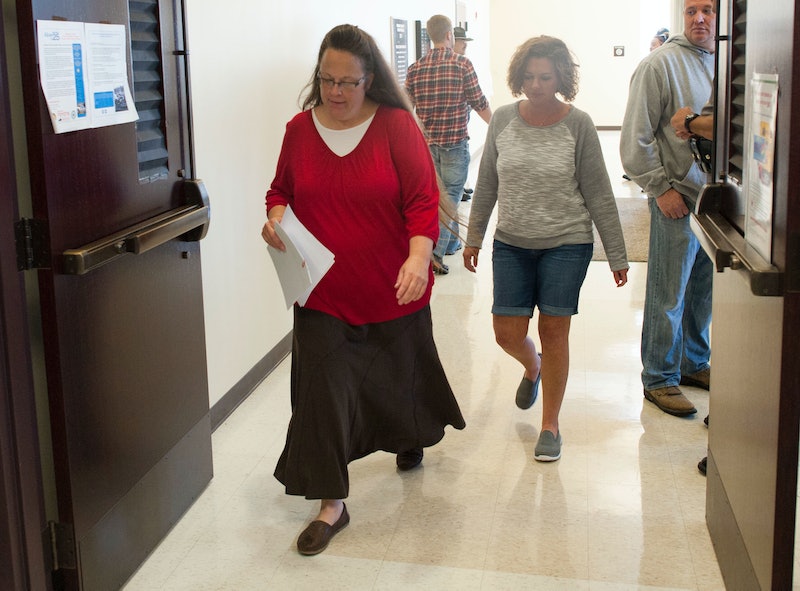 On Tuesday, the Liberty Counsel released a promotional video for Kentucky county clerk Kim Davis' new book, Under God’s Authority. In the video, a GOP governor glorified Davis as an "inspiration" to kids, commending her decision to illegally refuse to issue marriage licenses to same-sex couples in Kentucky.

Kentucky Governor Matt Bevin, a Republican, who in 2015 issued an Executive Order mandating that country clerks' names be removed from marriage licenses (which some saw as a nod to Davis) offered heavy words of praise for her in the seven-minute long video. Reflecting on Davis' actions, the governor noted that Davis knew "she was right" and lauded her firmness in essentially treating same-sex couple differently than heterosexual couples:

Her boldness, her conviction, her knowing that she was right, her willingness to defend that against all the scorn, all the enmity, all the vitriol, all the nastiness, she stood firm ... I think Kim Davis is without question an inspiration, not only to leaders like myself—people in the public arena and those outside the public arena—but to my children, the children of America.

Davis is the county clerk for Rowan County, Kentucky and is running for reelection in 2018. Back in 2015, she garnered national attention when she refused to comply with a federal court order to issue marriage licenses to same-sex couples. Davis was eventually arrested and jailed for five days for contempt of court. Presently, Davis remains in her position as county clerk but does not personally issue same sex marriage licenses (she instead relies on her deputy clerks to do so).

In addition to calling her an "inspiration" for America's children, Governor Bevin also indicated that he believes that all Americans should view Davis as a role model. “Her faith and her conviction in the fact that that faith was protected by the First Amendment in our Constitution – in our Bill of Rights, specifically – is something that she was willing to put front and center," the governor said. "... And if that’s not admirable, if that’s not something we would want all Americans to emulate, I don’t know what is," he added.

Davis' new book, which the video is being used to promote, is described as a chronicle of her "dramatic encounters with furious, fist-pounding, homosexual men and the hate mail that flooded her office," according to the book's description. The description also added that "Kim takes you behind-the-scenes of the unlikely saga that took America by storm in 2015 ... She tells how God transformed her life in 2011, why she almost retired in 2014, and how she knew — six months before the U.S. Supreme Court's disastrous 2015 same-sex ‘marriage’ opinion — she was headed for jail.”

Chris Hartman, the director of the Fairness Campaign, which advocates for ending discrimination based on sexual orientation, told the Herald Leader that he believed the book, Under God's Authority, should instead be titled, Kim Davis’ Cost to Kentucky Taxpayers. The paper noted that a federal judge found that Kentucky taxpayers owe the same sex couples who sued Davis for refusing to issue them licenses around $225,000 in legal fees and court costs.

Funny how people get upset when you deny them their civil rights and put your personal beliefs ahead of your duty as a secular public official. Gay and lesbian couples seeking the legal status of marriage are not, and should not be, the only people fist-pounding furious about Davis and her political enablers. As a straight, Christian taxpayer, I expect public officials to obey the law and not try to impose their religious beliefs on others. If they can’t do that in good conscience, they should resign.

Davis, a Republican, is running against four Democrats in this year's county clerk elections. One of the Democratic candidates, David Ermold, is a man to whom she denied a same sex marriage license back in 2015.