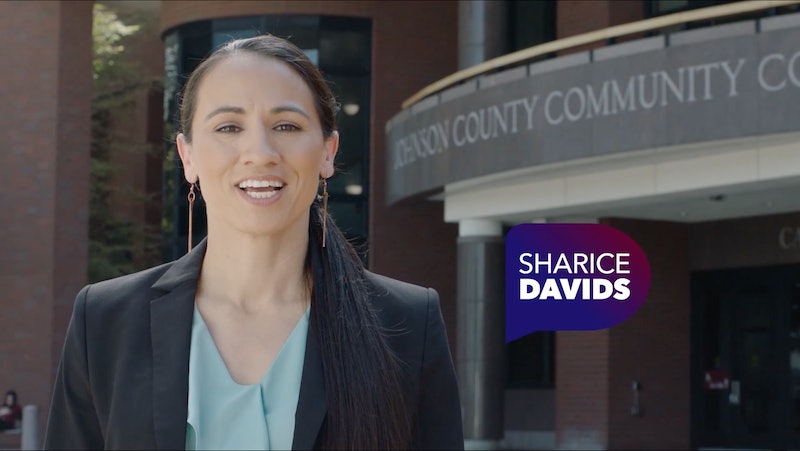 The close race in Kansas' 3rd congressional district recently made headlines again, this time for an inflammatory remark made against the Democratic candidate, a Native American woman who also happens to be a lesbian and a former professional mixed-martial arts fighter. The GOP official who said Sharice Davids would be "sent back packing to the reservation," resigned Wednesday evening.

This all started when Kansas GOP precinct committeeman Michael Kalny sent a Facebook message to Anne Pritchett, president of the Johnson County Democratic Women’s north chapter, on Sunday. "Little Ms. Pritchett – you and your comrades['] stealth attack on Yoder is going to blow up in your leftist face[s]," he wrote, referring to Davids' Republican opponent Rep. Kevin Yoder. “Your radical socialist kick boxing lesbian Indian will be sent back packing to the reservation!!!!!!!!!!!!!!!!!!!!!!!!!!!!!!!!!!!!!!!!!!!!!!!!!!!!!!!!!!”

Pritchett posted a screenshot of the message to social media, which quickly went viral. On Tuesday, in an interview about the message with The Kansas City Star, Kalny asked, "What is this lady trying to accomplish?" before hanging up the phone.

Then on Wednesday morning, Johnson County Republican Party Chair Mike Jones told Kansas' public radio station, KCUR, that Kalny would be resigning, saying Kalny "didn't want to bring unwanted attention to the party." Jones, along with other Republicans, have been quick to condemn Kalny's messages as not reflective of GOP sentiment toward Davids.

"It's concerning any time you hear comments like that," Jones said in an interview with KCUR. "There's too much hostility in politics right now. This is not an isolated incident, and not one related to one party or the other." Jones also clarified that Kalny's statements were "clearly inappropriate," and that Kalny is not a GOP spokesperson.

Jim Joice, executive director of the Kansas GOP, similarly condemned Kalny's language, but took the opportunity to lash out at Democrats at the same time. "This is the same type of rhetoric we condemn the left for,” he told The Kansas City Star. "We must be better than this."

Davids, who in recent weeks was endorsed by Barack Obama and by Joe Biden, responded by emphasizing that Kalny's message is an outlier. It "doesn’t represent Kansas values, and it doesn’t represent the values of the Republicans we know, many who support this campaign," she told The Kansas City Star.

Yoder, who is endorsed by President Trump, was also quick to distance himself from Kalny's rhetoric for being an inappropriate personal attack. It's worth noting, however, that Yoder's messaging has frequently called Davids an extremist and an outsider, even though she grew up in Kansas. The night of the Democratic primary, Yoder criticized Davids and her opponent Brent Welders for wanting to "force their radical ideas on those of us who have dedicated our entire lives to this community and this state." He continued, saying they "don’t know Kansas. They don’t know our values."

If Davids wins the congressional race next month, she will be the first LGBTQ+ person to represent Kansas in the House, as well as one of the first Native American women in Congress. "One of the really awesome things about this increase in the diversity of the people who are running for office across the country," Davids told Bustle in May, "[is that] we’re going to have so many more people participating in those conversations that are not a homogenous group."