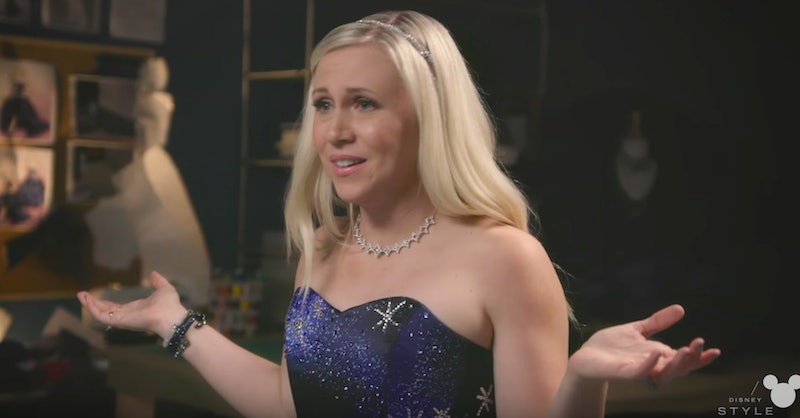 Three days. That's how long designer Andrew MacLaine had to create a Disney-themed, custom couture ball gown based on Cinderella and her rags-to-riches transformation. The dress was commissioned by Ashley Eckstein, the founder of Her Universe, a community that is "fashion for fan girls," and the voice of Ahsoka Tano in Star Wars.

Eckstein needed a dress for the 2017 Her Universe Fashion Show at San Diego Comic Con. MacLaine got the call — that's no surprise, since he won the first-ever Her Universe Fashion show at SDCC. Eckstein actually created that event because of fans, since she noticed that they were using the hallways of SDCC as their personal runway. She turned that into a fashion show celebrating geek couture.

The winner of the Her Universe Fashion Show gets to design a Disney Princess-inspired collection — don't you love everything about this epic event? So, for her own dress for the fashion show, Eckstein sought something Cinderella-themed, since she adores the character and the story of transformation.

Eckstein specifically loves when Cinderella's attire shifts from rags to her gown and she is surrounded by stars and fairy dust. She wanted to take that moment and turn it into a gown. And that's just what MacLaine did.

The frock's black, blue, and sparkly star pattern mimics "When You Wish Upon a Star" and has tiers like the staircase that Cinderella ascends at Prince Charming's palace.

This is the scene that provided the main source of inspo.

This image also inspired MacLaine, who clearly had a vision and executed it according to Eckstein's specs.

You can see the material and the "tiers" here.

Here is the beautiful final product. Yes, MacLaine took inspo from many elements in the 1950 animated film and you can see it in the final product, which is so fresh, fun, and wearable.

The mullet hem and the ruffles are flawlessly complimented by the dark colors and the shimmer.

You can watch the gown, from genesis and sketch to completion, with Eckstein wearing it at the Her Universe SDCC Fashion Show in this video.

You should definitely take some time and poke around the Her Universe site. It's a bazaar of cool, comic book and superhero-related products, from pins to hair clips to backpacks to apparel.