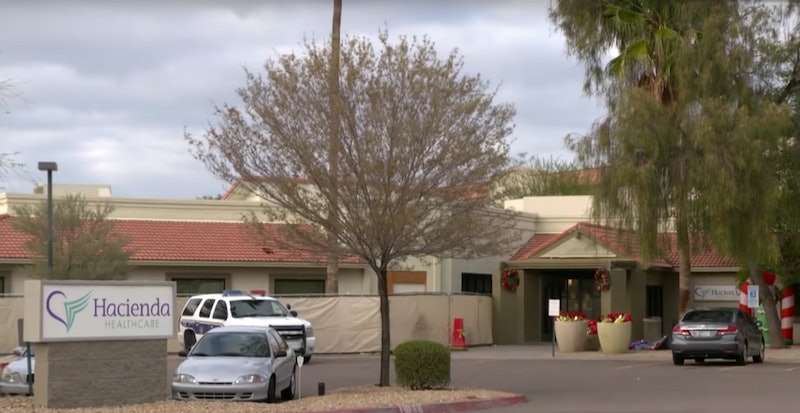 Justice may be on the horizon for the family of an Arizona woman who gave birth after she was raped while in an incapacitated state. The Phoenix Police Department announced on Wednesday that it had made an arrest in the Hacienda HealthCare surprise birth case, disclosing that a 36-year-old nurse was being held because his DNA matched that of the newborn.

The woman's story caught the nation's attention a few weeks ago after she unexpectedly gave birth on Dec. 29. Aides at Hacienda HealthCare, a Phoenix nonprofit that cares for people who are chronically ill or have disabilities, said they had no idea she was pregnant until she began giving birth (a medical exam performed on her eight months earlier showed nothing usual, per The Arizona Republic). The baby boy survived and a police sergeant said Wednesday that he is in good health, per The New York Times.

The male suspect had worked at Hacienda since 2011. He's currently being held in a Phoenix jail under charges of sexual assault and vulnerable adult abuse. Company officials announced that they'd fired him on Wednesday but said that he'd been working there as recently as the day before. "Every member of the Hacienda organization is troubled beyond words to think that a licensed practical nurse could be capable of seriously harming a patient," the company said in a statement, adding that its "team has increased security measures" at the facility and "will continue to do so."

The 29-year-old woman is a member of the San Carlos Apache Tribe based in San Carlos, about 100 miles outside of Phoenix. Soon after the birth last month, Tribe Chairman Terry Rambler released a statement saying he was "shocked and horrified at the treatment of one of our members." He added, "When you have a loved one committed to palliative care, when they are most vulnerable and dependent upon others, you trust their caretakers."

Court documents show that the woman has been at Hacienda since she was 3 years old and that she has a brain injury and seizures, according to The Arizona Republic. The documents also indicate that she is "not alert," has "poor" rehabilitation potential, and is "unable to make any decisions or give consent due to her disability."

Although many reports have stated that the woman is in a vegetative state, her family's lawyer recently specified that this is not an accurate representation of her condition. Attorney John Micheaels said the woman has "some awareness" and that "she is able to respond to family when they are in the room in terms of making facial expressions." He added: "The important thing is that she is a beloved daughter, albeit with significant intellectual disabilities."

This woman's case highlights an alarming trend that affects many people with disabilities. An NPR report on unpublished Justice Department statistics showed that people with intellectual disabilities are over seven times as likely to be sexually assaulted as those without disabilities.

"It is my hope that justice will be served," Rambler said in his statement about the assault. Wednesday's arrest may mark a step in that direction.