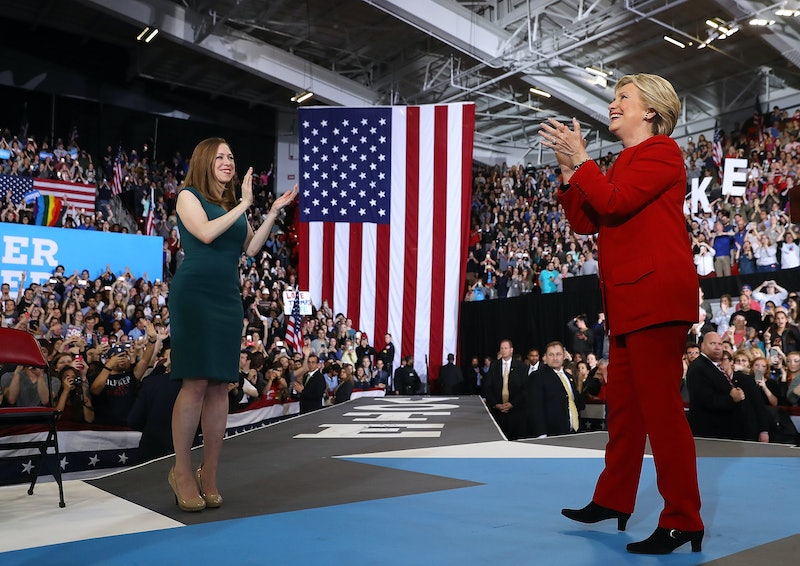 Several news outlets reported on Thursday that Hillary and Chelsea Clinton may start a production company for film and television projects. Bloomberg reported that the two are considering the idea, and although no specifics have been announced or confirmed, sources tell the outlet that the Clintons plan to use the the company to highlight stories by and about women.

Similarly, sources told The Hollywood Reporter that the mother-daughter pair was considering starting a film and TV production company that would focus on women. Hillary and Chelsea have had discussions with studios about "financing a pipeline of programs," the idea being that the studio would have first dibs to release each project, according to Bloomberg. The publication's source added that the discussions are in their early stages. Bustle has reached out to Chelsea's legal representative for comment; a representative for Hillary declined to comment on the reports.

If the reports are true, it wouldn't be the first time Hillary has stepped into the producer's role for a film project. In August, THR reported that Hillary had signed on to serve as executive producer for The Woman's Hour, a television series about women's suffrage based on the popular book by the same name. The series, which is currently in production, is set to be distributed by Steven Spielberg's Amblin Entertainment.

If the reported production company comes to fruition, the Clintons will be following a similar path to the one that Barack and Michelle Obama took after exiting politics. In 2018, the Obamas formed Higher Ground Productions and signed an exclusive, multiyear deal with Netflix to produce several series for the online streaming platform. The company announced its first batch of projects in May; it includes three features and four television series, most of which have a political, historical, or social justice focus.

The 2016 election marked what could be the end of Hillary's decades-long political career. Many people had speculated that she would run for president again in 2020, but Hillary has explicitly denied this on several occasions.

Nevertheless, the former first lady, senator, and secretary of state has undertaken a variety of projects since leaving elected politics. In 2017, she launched Onward Together, a political action committee aimed at "supporting groups that encourage people to organize, get involved, and run for office" and "advancing the vision that earned nearly 66 million votes in the 2016 election," according to its website. That same year, Hillary released What Happened, a memoir about the 2016 election. It was a smash hit, Money.com reports, selling around 300,000 copies in its first week.

Meanwhile, Chelsea and Bill Clinton announced in May that they're launching a podcast, titled Why Am I Telling You This?, in collaboration with the Clinton Foundation. The series, which is already available on iTunes, aims to tell "stories of the people, issues, and events that have shaped our world and the Clinton Foundation’s work — and why we should be optimistic about the future," and features interviews with the Clintons, academics, policy experts, and other notable public figures.