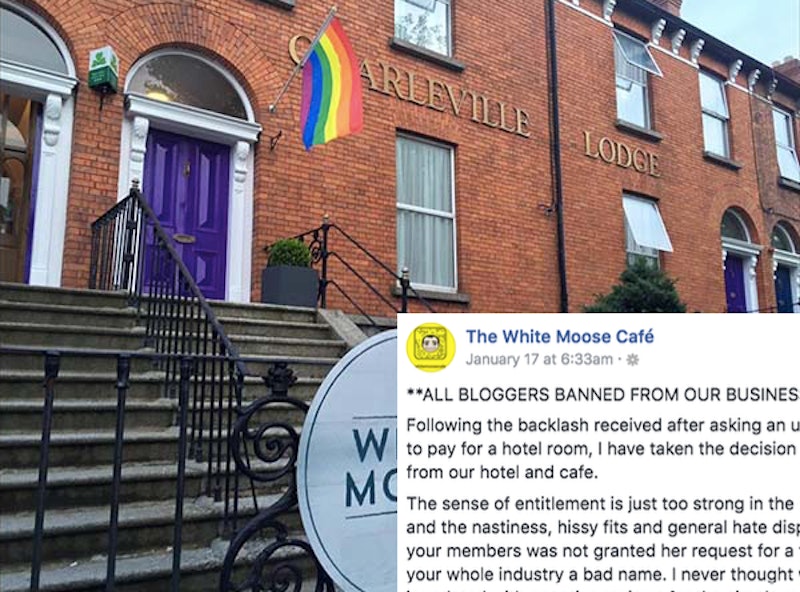 There is nothing quite so murky as the economics of "social influencing". Now that influencers are equipped with Instagram, Twitter, and a dozen other platforms that grew faster than they could possibly be fully regulated, figuring out how to manage promotional content — particularly between social influencers and smaller brands — remains somewhat uncharted territory. This has been an ongoing issue, but nothing demonstrates the crux of it quite like a hotel owner who banned bloggers from staying in his establishment following a heated exchange that has been documented on social media.

Bustle has reached out to Paul Stenson and Elle Darby, the individuals involved in the exchange, for comment; Paul Stenson sent a video response to the incident that can be viewed in full further down in this article, saying "This event in itself puts into question the authenticity of influencer marketing" and alleging that Darby's followers left one star reviews on his property despite never having been; Bustle will update upon Darby's response.

On January 16, Paul Stenson, owner of the White Moose Café and Charleville Lodge in Dublin, posted screenshot of an email he received. The email was from social media influencer Elle Darby, a beauty, lifestyle, and fitness YouTuber, although Stenson posted the screenshot of the email with her name and any identifying information blacked out. The email is a request from Darby for a five-night stay at Stenson's hotel, in exchange for social media coverage. (Stenson notes on the Facebook page, "***ALL POSTS ON OUR PAGE ARE CARRIED OUT BY PAUL STENSON AND DO NOT REPRESENT THE VIEWS OF CELESTINE LTD. TA CHARLEVILLE LODGE OR WHITE MOOSE CAFE***".)

In his post, Stenson responded to the email in an open letter on the White Moose Café Facebook page, expressing his disapproval over the request. "In future, I’d advise you to offer to pay your way like everyone else, and if the hotel in question believes your coverage will help them, maybe they’ll give you a complimentary upgrade to a suite," Stenson writes. "This would show more self-respect on your part and, let’s face it, it would be less embarrassing for you."

Somehow social media users connected the email back to Darby — likely from the part that included her specific follower numbers — which in turn led users to post negative comments on her social media pages. This prompted Darby to post a video response to Stenson's Facebook post and the commenters, titled "i was exposed (SO embarrassing)".

In the video, Darby describes her work as a social influencer. She justifies the exchange by saying she has worked with establishments like Stenson's in the past, proposing that for some establishments, it may make more sense to get advertising from social media than more costly options like television or billboard ads. "As a 20-year-old girl running a business from her own home, I don't feel I did anything wrong in that," she says in the video, in regards to the incident with Stenson.

This led to further backlash aimed at Stenson and his Facebook page from followers of Darby. In response, on Wednesday, he posted that all bloggers were banned from the hotel, writing, "The sense of entitlement is just too strong in the blogging community and the nastiness, hissy fits and general hate displayed after one of your members was not granted her request for a freebie is giving your whole industry a bad name. I never thought we would be inundated with negative reviews for the simple reason that somebody was required to pay for goods received or services rendered."

As of press time, Darby has not responded to the response from Stenson. In response to Bustle's request for comment, Stenson — who is currently on holiday in Amsterdam with his partner — sent a final statement to the press, which can be viewed in full below.

This is far from the first time an issue like this has arisen with brand and influencer marketing relationships; in April 2017, the Federal Trade Commission stepped in with a stern reminder for influencers and brands to clearly disclose their relationships online, concerned at the misrepresentation of views for products or experiences that social media influencers were either given for free or paid to endorse. In addition to the post, the FTC sent out 90 letters to influencers and marketers reiterating the rules surrounding disclosing influencer and brand relationships.

But although the disclosure rules are clear, what is not so clear is how, exactly, influencers and brands navigate the establishment or rejection of these relationships. The ability to monetize social media, while often compared to owning your own business, does not fall under the same guidelines, and evolves and changes with every new iteration of social media available to us. This public dispute is just one of many incidents that highlight the uncharted nature of "social influencing," and the very clear divide of people who are either for or against the idea.