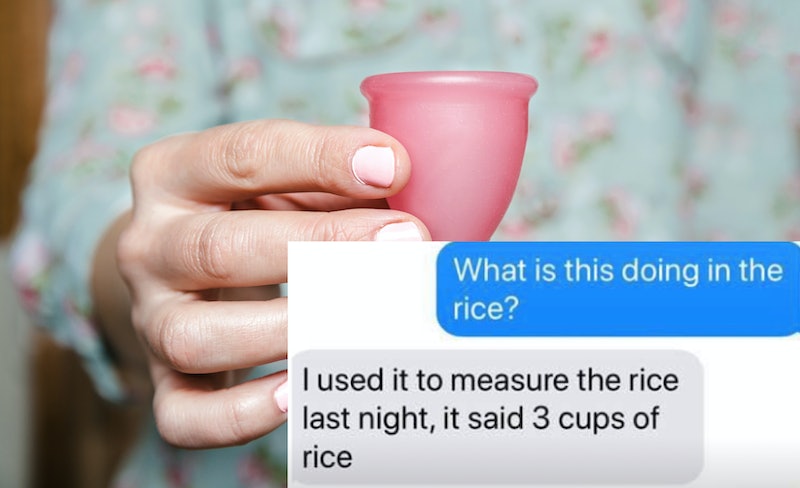 Some objects are perfectly acceptable to use for multiple purposes.Keeping your charging cords from getting tangled with a binder clip? Fine. Organizing craft supplies with an over-the-door shoe holder? Awesome. Using a menstrual cup to measure rice, though? Uh… not so much. That, however, is exactly what Cindy Hobbs’ husband did recently — although I suppose at least it was an honest mistake. Ideally, though, the mistake would have been noticed before the rice was consumed. (Bustle reached out to Hobbs for comment but received no response by press time.)

On Dec. 3, Hobbs posted two screenshots of a text message exchange she had with her husband to the Facebook page of her jewelry business (she makes and sells breast milk-infused jewelry and keepsakes). The exchange begins with a perplexing photograph: That of a clean menstrual cup sitting inside a sack of rice. “What is this doing in the rice?” she asked.

“I used it to measure the rice night, it said 3 cups of rice,” he responded.

Hobbs replied with the nauseated face emoji, to which hesent back a question mark.

“It’s my MENSTRUAL CUP,” she replied — but he remained in the dark.

“? Menstalony soup?” he asked. She told him the term was “minestrone soup” and subsequently told him to Google “menstrual.” He did — and promptly responded, “Oh f*ck!”

The phrase “whomp, whomp” doesn’t quite begin to cover it.

Context, of course, is key, though: How exactly did the menstrual cup end up in a position where it could be mistaken for a rice measuring cup in the first place? According to a comment Hobbs posted to the original thread, the situation began when her toddler came running out of the bathroom with Hobbs’ (clean!) menstrual cup in hand. Hobbs hurriedly retrieved it from the child, but, as Scary Mommy points out, she’s a mother of three, and wrangling three kids is no small feat. Hobbs put the cup down on the kitchen counter — “just so happened I placed it right next to the rice he had sitting there,” she wrote on Facebook — and subsequently got tied up with, y’know, everything else that goes along with caring for three kids. The cup, therefore, stayed on the counter — and would remain there until Hobbs’ husband made rice later. And, well… we all know how that ended.

For what it’s worth, as long as the menstrual cup was clean —which it was, as Hobbs noted in a comment on the Facebook thread — the whole thing really isn’t as gross as it might seem. Proper menstrual cup care dictates that, after it’s removed, the cup be emptied in the toilet and washed thoroughly with warm water and a mild, unscented, oil-free soap; after it’s dry it’s ready for reinsertion. You can also boil the cup in hot water for five minutes — something which is recommended users do after their cycle has finished. Take those steps, and a menstrual cup is perfectly sanitary.

That said, though, most people probably still wouldn’t be wild about the idea of eating rice that’s been measured with a menstrual cup, even if it was perfectly clean and sanitized — and, to be fair, that's also not something that's really recommended — so it’s understandable if the whole thing makes you shudder and laugh at the same time.

As hilarious as this story is, though, I also think it points to a more serious issue worth considering. I mean, yes, the story certainly is funny; it’s funny in the way that all, “WOW, that object is not used for that purpose” kinds of stories are are. However, I’d argue that it also speaks to the fact that weird social taboos lead to ignorance about things that should really be considered general knowledge. The point isn’t to get outraged about the fact that cis men just don’t understand menstruation, and ugh, they are the worst — the point is that the knowledge cis men frequently lack is a direct result of a culture that treats periods as Something To Be Hidden Away From Polite Company. Period stigma does everyone a disservice, both those who get periods and those who don’t

As Scary Mommy notes, “The ‘haha dads can’t do anything right’ trope is beyond tired” — and you know what would put that trope to bed once and for all? Not treating periods like they’re some horrible thing of which no one should ever speak because it is just TOO MUCH for our delicate sensibilities to handle. Periods happen. They are a simple fact of life for most people with uteruses. And treating periods with the frankness such a common occurrence really deserves would probably go a long way towards fixing the disservice stigma does us all. Knowledge is power, after all.

But just because we can actually take a valuable lesson away from this viral story doesn’t stop it from being hilarious, too. I doubt Hobbs’ husband will ever make that mistake again — and that, I suppose, is a victory with a side of humor.