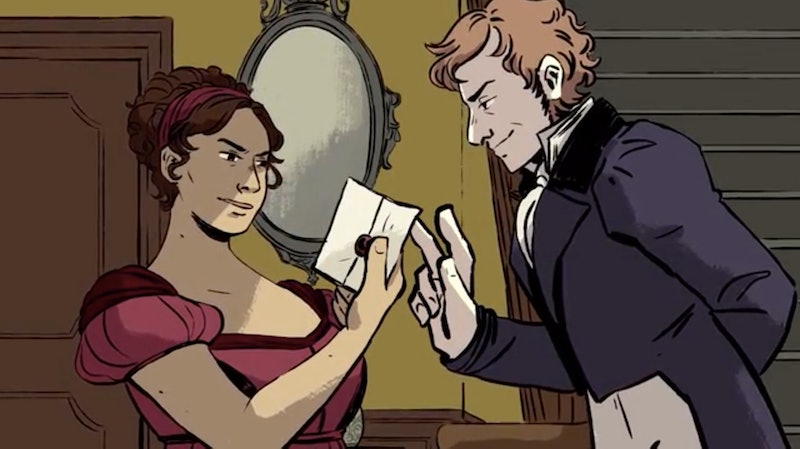 Gamers and Austenites, take note! There's a Jane Austen roleplaying game blowing up on Kickstarter, and you're going to want to get in on all of the marriage-and-manners action before it's over.

Good Society: A Jane Austen Roleplaying Game lets you create your own Jane Austen-inspired character and dive into some self-created, Regency Era intrigue. Created by Veronica Hendro and Hayley Gordon, the Australian duo behind Storybrewers Roleplaying, Good Society "is a collaborative roleplaying game that seeks to capture the heart, and the countenance, of Jane Austen's work." You don't need prior roleplaying experience to play Good Society, and a New to Roleplaying Guide has already been unlocked through the Kickstarter campaign's stretch goals.

According to Storybrewers Roleplaying, you'll need to plan on two or three sessions to complete a game of Good Society, but players can design games to last longer if they wish. Good Society may be played with or without a facilitator, but every player takes part in the creation of the game world. After deciding what kind of Austen-inspired story you want to tell, each player in your game will create their own character with a unique role, family background, secret desire, and relationships to other characters. You'll also populate your game with secondary, non-player characters who will liven up the story. Once that's done, you're ready to begin playing Good Society, scheming and collaborating to achieve your secret desire while keeping your society reputation.

You can enjoy Good Society even if Jane Austen novels aren't necessarily your thing. Kickstarter backers have already unlocked one re-theme of the game through a 50,000 AUD (or about $40,000) stretch goal, and another is right around the corner. The Pride, Prejudice & Practical Magics expansion allows players to design games based on worlds found in Regency-based fantasy novels, such as Jonathan Strange & Mr Norrell, Shades of Milk and Honey, and Sorcery and Cecelia. Another expansion, Sense, Sensibility & Swordsmanship, will allow players the opportunity to create characters with badass alter-egos, drawing inspiration from Zorro, Sovay, and The Scarlet Pimpernel. Sense, Sensibility & Swordsmanship will be unlocked if the Kickstarter campaign raises 100,000 AUD (or about $79,000).

Good Society first appeared on Kickstarter with a modest goal of $4,000 AUD (about $3,200). As of this writing, the Storybrewers Roleplaying game has drawn 89,775 AUD — about $71,101 — out of more than 1,500 backers. With 14 days to go, hitting the Sense, Sensibility & Swordsmanship stretch goal looks like a foregone conclusion, but the Good Society creators will need assistance from a few more gamers and Austenites to get there.

You don't have to be in possession of a large fortune in order to help. For a pledge of about $17 USD, you'll receive .PDF copies of the Good Society game book, the desire and relationship cards, the Deck of Non-Player Gentry, all unlocked stretch goals, and a Quickstart guide to get you playing before the Oct. 2018 estimated delivery date.

So what are you waiting for? Head over to Kickstarter and pledge to back Good Society: A Jane Austen Roleplaying Game today!

This article was originally published on Feb. 19, 2018