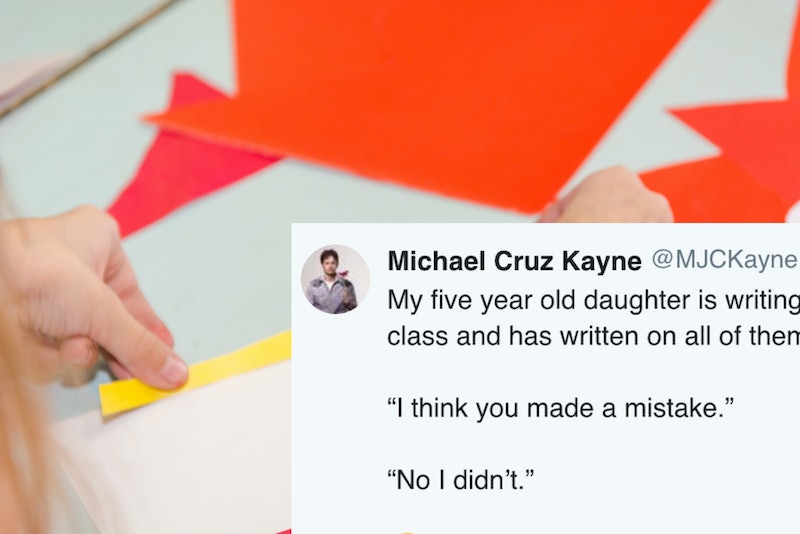 When I was a little girl, I went to a Jewish day school and never got to send Valentines in class, which, in a way, was a blessing, since there was no pressure on me to inform my third grade crushes (Brian from the Backstreet Boys, Leonardo DiCaprio, Harrison Ford, Alex B.,) that I had ~feelings~ for them. But had I been able to craft a V-Day message, I hope it would have resembled this game-changing Valentine one kindergartner sent her classmate this year. If Generations Y and Z can't save feminism, there is still hope in the toddlers.

As reported by Cosmopolitan, on Tuesday, Feb. 13, Brooklyn resident Michael Cruz Kayne was sifting through the Valentines his five-year-old daughter, Willa, had been crafting for her kindergarten classmates. What he noticed, though, was that instead of inscribing them with typical V-Day pleasantries like, "Be Mine," or "I Love You," on each of them she had written, "You Love Me." Kayne assumed she had written the statement in error, but indeed it was he who was mistaken. "I think you made a mistake," he told her, according to a tweet. Willa responded to this mansplaining with grace: "No I didn’t." Willa is an American icon.

Indeed, it appears Willa has a perfectly firm grasp on both proper grammar and the concept of love, hence her confidence in Valentine-crafting. Willa doesn't have time for games. She knows where she stands with Julian. She knows what it means when she catches him staring at her in the Reading Corner, before quickly averting his eyes when they meet hers. She knows that when he bumped into her at the sand table, it was anything but accidental. She knows that though, during Mother, Mother, May I Come On Over, he might pick Julia to come over first, really, he wants her. Julian loves Willa. He's afraid to say it. But Willa's not afraid to give it to him straight.

Willa is only five, but she has the confidence of a woman nearly seven times her age. I am 28, and I still can't tell a man I like him without nearly throwing up on a barstool, much less tell him he loves me. Three years ago, I merely suggested to someone I was vaguely dating that he might like me in a romantic way. Then, I freaked myself out over it so much that I spent the next six hours crying about it to my roommate and forcing her to analyze every one of his verbal and physical reactions to determine whether I had "messed it up" by daring to bring up feelings. I really need to sit down with Willa over a couple of juice boxes and figure out where she gets her enviable mojo. Willa, you are my only hope!

The best part of this story, though, is that while Willa knows how these boys feel about her, she reveals nothing of her own feelings and/or intentions. There's nothing in her Valentine that suggests she returns Julian's affections, or the affections of the unnamed recipients of her various cards. This is the purest form of torture. Julian will never know where he stands among Willa's various paramours. He will have to fight for her if his love is pure and true. Willa is a master of her fate.

It's also noteworthy that these Valentine's Day cards aren't even heart-shaped. They are not red. They are not pink. They are declarative and matter-of-fact. They are indistinguishable neon rectangles. They mean nothing. They could mean anything. If I were a five-year-old recipient of this card I would drive myself into such an analytical frenzy my tiny head would spin. Willa, you are my Queen.