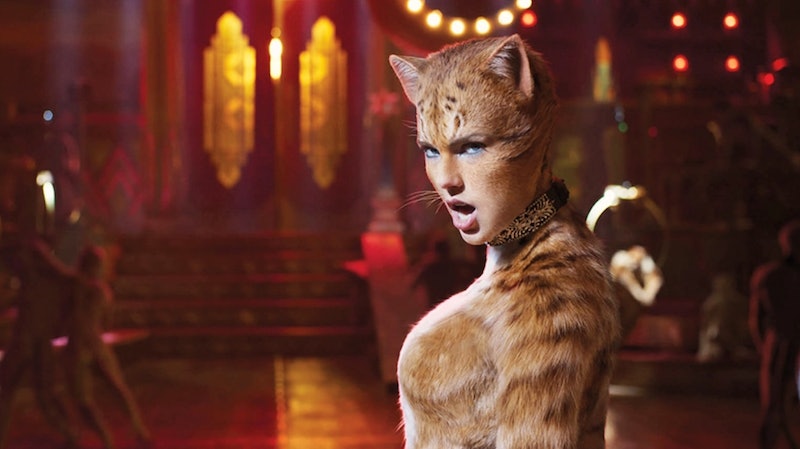 When the first trailer for Tom Hooper's Cats adaptation dropped in July, it was met with panic, excitement, and confusion. "I can never let our cats see this trailer," wrote IndieWire's Kate Erbland. "I don't know why you're all freaking out over miniature yet huge cats with human celebrity faces and sexy breasts performing a demented dream ballet for kids," podcaster Louis Virtel tweeted. What was this star-studded cast doing prancing around a London soundstage with their faces rendered vaguely feline by "digital fur technology"? Was this a dream, or an uncanny nightmare?

Musical theater fans were quick to point out that the hit musical, adapted from a series of T.S. Eliot poems called "Old Possum's Book of Practical Cats" by Andrew Lloyd Webber, is itself nonsensical and often completely unhinged. Viewers would have no choice, they reasoned, but to give in to its campy insanity. But while it's important to remember that Cats is not supposed to be a cohesive story with an actual plot, it's highly likely you'll still have plenty of questions after seeing the film adaptation — I certainly did! To help you make sense of the chaos, let's unpack them.

What, exactly, is a Jellicle cat?

Brace yourself, because you're going to hear this phrase countless times, and its meaning likely won't become more clear with repetition. Some have determined that the word "Jellicle" comes from T.S. Eliot's grandchild trying to say "Dear Little Cat," which is an explanation that's about as confusing as this film's entire notion of what is considered entertainment. Others have taken this to be a play on "angelical," because of the musical's focus on getting to heaven. (Did we mention all the cats want to die? More on that later.)

Actual attempts to explain this near inexplicable term aside, you can safely assume that this particular tribe of cats considers themselves to be the aforementioned Jellicle cats, and that Jellicles — at least in this universe — have the ability to sing, tap dance, and perform magic.

How big are Jellicle cats?

This is a serious question that the movie does not actually have the answer to. At first it appears that the cats are small — like, you know, cat-sized— when you see them next to dumpsters and trash cans in the alley. But in the musical number sang by Jennyanydots (Rebel Wilson), the cats appear to be as tall as a kitchen table. Even more confusingly, when Victoria (Francesca Hayward), Mungojerrie (Danny Collins) and Rumpleteazer (Naoimh Morgan) are stealing jewels from a wealthy home, Victoria is able to slip a ring around her entire arm, which would suggest that the cats are around the size of hamsters. How big are the cats? Does being a Jellicle cat mean one's body size magically shifts according to his or her relevance to the plot? We will never know for certain.

Why does everyone hate Grizabella so much?

From the first moment we meet Grizabella (Jennifer Hudson), everyone is suddenly either hissing at her, hiding from her, or bullying her while she cries. As she drags her matted coat behind her, I am profoundly confused as to why everyone hates her. We learn that once she lived a life of glamour and happiness but now she is washed up and shunned by the other cats. There are hints that she may have been a sex worker, that she ran with the musical's villain Macavity, or maybe just that she had the audacity to venture outside of the Jellicle commune. But when she sings "Memory," the most iconic song to come out of this musical, everyone suddenly forgets they hate her and every Jellicle in sight has tears in their eyes. OK!

Why is there a bar that suspiciously serves flavored milk?

If the consensus is that these cats come out to twirl only after humans have gone to bed, how can we explain The Milk Bar? I can't imagine who the regulars would be at an establishment focused almost entirely on flavored dairy. Does flavored milk get cats drunk? If I drink it, will I finally understand why this movie forced me to watch James Corden aggressively chug milk from a spout while singing about being fat?

Why do some cats wear clothing while others are naked?

Bedazzled jackets, fedoras, and fur coats are just some of the statement pieces we see the Jellicles wearing throughout the course of the film. At first, this feels normal and fine — cats in clothes! — until you start to see the clothed and unclothed cats interacting with one another. If some cats are compelled to cover up, does that mean they consider the other cats to be naked? Is it not disturbing and cannibalistic that they are wearing the fur of other animals? Why do some cats have shoes on? The discomfort culminates in the too-sexy-for-the-big-screen musical number performed by Macavity (Idris Elba) and Bombalurina (Taylor Swift), in which both look unmistakably naked as they shimmy around on stage.

Why is there so much sexual tension?

I counted at least 16 incidents where I thought these cats were going to kiss and/or take things to a deeply sensual place over the course of the film.

I felt my tummy getting increasingly nauseous watching this big boy played by James Corden dumpster diving for old seafood, chicken legs, and trash. None of these things are particularly nutritious to eat after being exposed to the elements, and cats' stomachs are notoriously sensitive, so I worry!

Why is Munkscrap looking directly into my soul?

The role of narrator of this treacherous tale falls to the ballet-dancing grey tabby Munkscrap (Robbie Fairchild). He is the first to greet Victoria when she enters the scene in a burlap sack and essentially explains everything that is about to go down to both her and the audience. From the moment he stepped onto the screen, it was hard to notice anything else but his searing eye contact. It is unrelenting; never once did he soften his gaze. Why are you here, watching this movie? His piercing eyes implored me. I did not know what to tell him.

How could they do this to Sir Ian McKellen?

It pains me to watch him lap up milk from a saucer with the conviction of an esteemed stage actor.

What did I learn from this horrifying trip to anthropomorphic feline purgatory?

Cats has no beginning, middle, and end. The cats want to live, but they also want to die. They want to sing and dance with cockroach backup dancers as the world burns. And all I want to do is erase these cursed images from my mind.