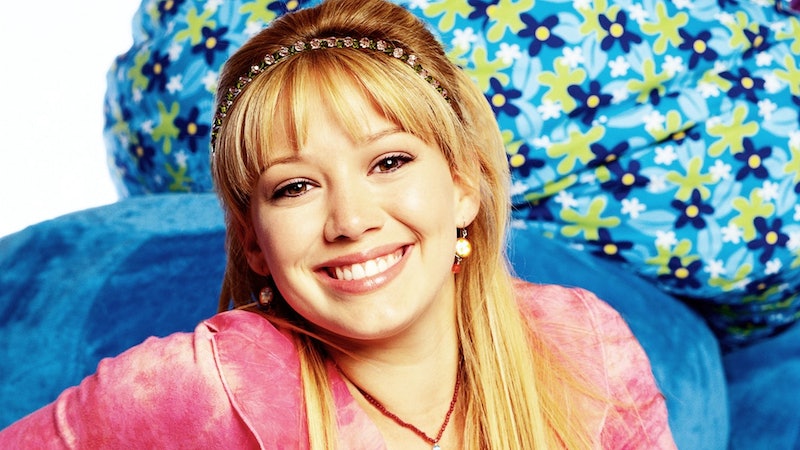 It's time to dust off those butterfly clips and break out the bellbottom jeans, because Lizzie McGuire is officially coming back. Hilary Duff herself appeared at the D23 Expo to announce a Lizzie McGuire revival is coming to Disney+, with original creator Terri Minsky. Deadline broke the news on Friday, Aug. 23, just minutes before Duff took to the stage at the Disney convention to confirm that she would be reprising the role that made her a household name.

The new Lizzie McGuire revival, or sequel series, will follow Lizzie's life as a 30-year-old living in New York City. But just because she's all grown up doesn't mean fans still can't expect animated Lizzie — the beloved manifestation of her inner thoughts in the original — to make an appearance. Per Deadline, instead of being 30, animated Lizzie will still be her young, 13-year-old self, so expect plenty of snark and the return of those platform flip flops. "I am beyond excited," Duff said in a message posted to her Instagram story after the news broke. "I really missed her, and I think now is a great time for her to come back in her 30s." The actor also shared the news in an Instagram post, writing, "SURPRISE!!! I've been trying to contain this excitement for a loooong time while this has been in the works! I am beyond excited to be home again, back with my girl ♥️...and into her 30’s." And, hey now, of course she used the hashtag "#thisiswhatdreamsaremadeof."

It's unclear whether any other original cast members will be returning for the new series, but Duff did reveal a few details about the Lizzie McGuire revival. "Lizzie has grown up, she's older, she's wiser, she has a much bigger shoe budget," she told the crowd at D23, per Variety. "She has her dream job, the perfect life right now working as an apprentice to a fancy New York City decorator." Lizzie did always have impeccable style. Duff added that since her high school days, Lizzie has found "the perfect man, who owns a cool SoHo restaurant. She has her dream apartment in Brooklyn, and she's getting ready to celebrate her thirtieth birthday." Quick, someone go back and check if Gordo was a chef in middle school!

There's no word yet on wether any other cast members will be returning for the series. Gordo, of course, was Lizzie McGuire's best friend-turned-boyfriend, and was played by Adam Lamberg. The series also starred Lalaine as Lizzie's BFF Miranda, Jake Thomas as her younger brother Matt, Hallie Todd as her mother, and Robert Carradine as her dad. Some members of the cast, like Thomas and Todd, have been known to reunite — and delight fans on social media in the process — so, it's possible they'd be interested in returning to their beloved characters.

For now, fans can take heart in the news that their favorite Disney Channel show is coming back. And if that's not "what dreams are made of," then really, what is?

More like this
Netflix Reveals First Look At Wednesday In The 'Addams Family' Spinoff Series
By Bustle Editors
A New 'And Just Like That' Table Read Pic Confirms A Key Character's Return
By Jack Irvin and Grace Wehniainen
The 'Skins' Cast Shared The Reunion We’ve Been Waiting For
By Sophie McEvoy
24 Years Ago, 'Friends' Dropped Its Most Underrated Ross & Rachel Episode
By Grace Wehniainen
Get Even More From Bustle — Sign Up For The Newsletter