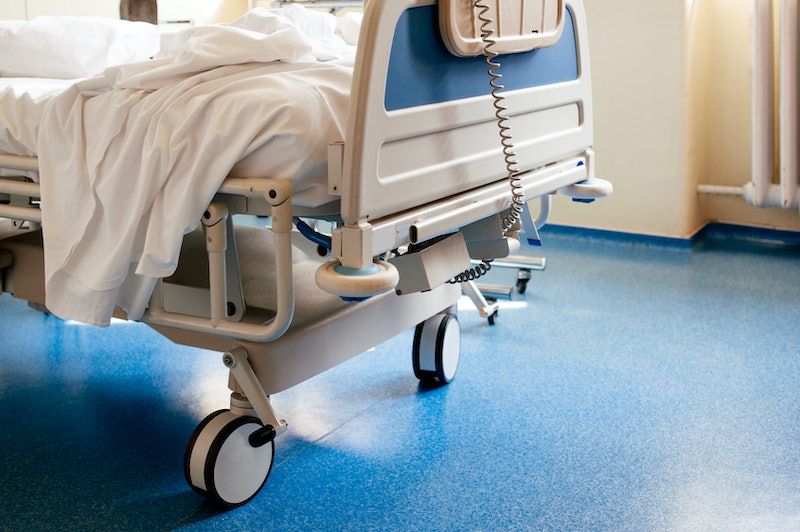 Nail biting is a super common habit that can wreak havoc on your health. It can cause bacteria on your nails to spread to your mouth, gastrointestinal infections, and even more serious — possibly fatal — health problems. In fact, a British man developed sepsis and nearly died from a cut he got from biting his fingernails.

The Sun reported that Luke Hanoman, a 28-year-old father of two, started feeling ill soon after biting the skin down the side of one of his nails. “I used to bite my nails all the time. It was nervous thing. And one day, I bit the skin down the side of my nail. It hurt a bit but I didn’t think anything of it,” Hanoman told The Sun. He later began to develop flu-like symptoms that became more severe as the days went on.

“I was in work throughout the week and started to get flu-like symptoms which were gradually getting worse. I had cold sweats, I was shaking, and then going hot. And then my finger started swelling up, and I had this unbearable throbbing,” Hanoman explained. “I started going really weird and I couldn’t focus.”

Though Hanoman told The Sun he thought he could sleep off his symptoms on through the upcoming weekend, his mother called the NHS 111 (aka, the medical emergency hotline in the U.K.) and Hanoman was rushed to the hospital with a high fever and red lines across his body.

Once admitted to the emergency room, Hanoman was diagnosed with a sepsis infection that originated from the cut on his finger that came from biting his nails. According to Healthline, sepsis is a life-threatening illness that is caused when your immune system releases chemicals into your bloodstream to fight off infections, but instead, the chemicals cause inflammation throughout your entire body. The symptoms of beginning sepsis include high fever, a fast heartbeat, a fast breathing rate, and a likely infection. When sepsis progresses without medical treatment, you can experience weakness, trouble breathing, discolored skin, mental confusion, and organ failure. Septic shock, a complication of sepsis infections, can make your blood pressure drop extremely low — leading to lifelong health problems if you survive, but can also be fatal.

Fortunately, after four days in the hospital, Hanoman’s sepsis infection was successfully treated with antibiotics. “It was quite scary. [...] They told me I was lucky to make it so long. I was close to septic shock,” Hanoman told The Sun. “The doctors and nurses were really good. They didn’t tell me how bad it was because I think they were trying not to worry me too much. When I was feeling better, they told me I was lucky to be alive.”

Dr. Steven Simpson, the medical director of the Sepsis Alliance, told BuzzFeed News that though he didn’t personally treat Hanoman, he agreed that the father of two was “lucky to be alive,” given how long Hanoman waited to receive medical attention. “Waiting too long [to get antibiotics] is dangerous. When you have these kind of symptoms, people need to seek medical attention,” he explained. “A simple little local infection should not give you fevers and chills — it should not make you shiver.”

Moreover, when speaking to BuzzFeed News, Dr. Simpson had additional words of caution for other nail biters: “If you get that really tender area around your nail bed or around your cuticle, and it’s really tender and you start seeing the redness creep up your finger, you should get attention now. Antibiotics now could be a lifesaver," he said. This advice also applies to other cuts throughout the body, not just ones from nail-biting.

While there’s no definitive statistic on how often people contract sepsis through nail-biting, there’s no denying that biting your nails can have a really negative impact on your health. Any open cuts that allow bacteria to grow and flourish could cause an infection, including those on a torn cuticle or nail bed.