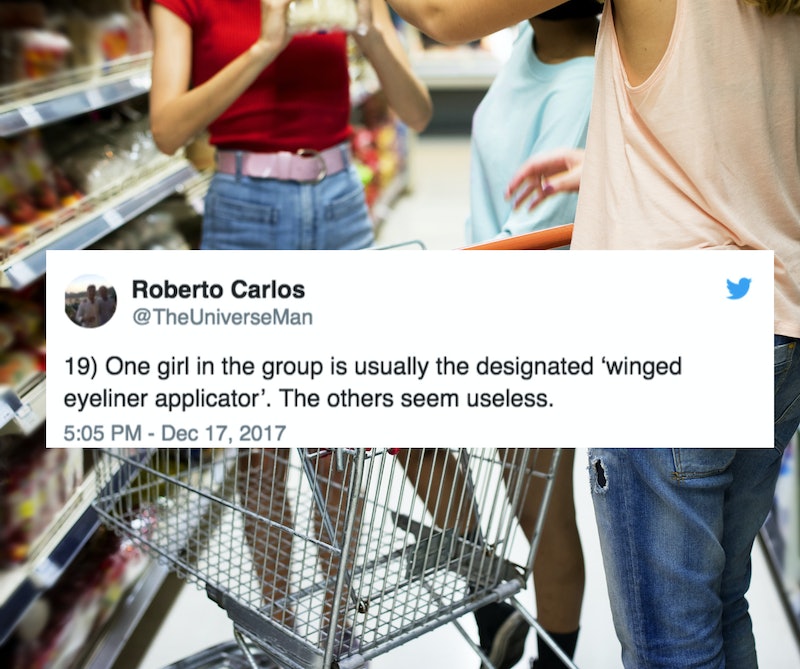 Going out with your roommates in college is an event. You pregame with music and tequila shots, all cram in front of the bathroom mirror to put on makeup, change and share outfits 100 times, and take forever to leave. When you get home, it's standard procedure to rehash the night, usually with sandwiches. This is a pretty familiar ritual for many of us, but it turns out it can be a fairly baffling one for men to observe, as one college student who found himself living with women for a week documented so hilariously on 32-tweet Twitter thread on Sunday.

Robbie Stowers, a 20-year-old University of London student, took a ski trip to France recently and ended up rooming with three young women he did not know. He told BuzzFeed that while the group got along very well, he did notice some ... differences ... in their living styles from those he'd experienced rooming with men. For instance, it appears (most) college men don't litter their floors with hair ties, or carry extra make-up along with their regular make-up, or carry at least two bottles of conditioner and three bottles of face wash with them at all times, JUST IN CASE. Must be nice to be so free.

It appears Robbie was unprepared for the post-night giggles.

If you don't have a group mum, then you have a hangover, OK???

And it's better for hair to be on the wall than in the drain!

Robbie discovered it is very important to moisturize and deep-condition.

And also that sticky bras do indeed exist.

A lot of work goes into being a girl, TBH.

Contouring, it turns out, takes a long time.

He learned so much!

Time is different for us, Robbie.

And boys' deodorant does smell better.

We did not have a "winged eyeliner applicator" in my group of college friends, regrettably, but someone did always put on my blush.

Robbie is kind of a gem, actually.

There are currently six hairgrips somewhere on my bedroom floor.

Robbie's thread was so hysterical (and, in many cases, relatable) that it quickly went viral, and, thankfully, it appears the women he roomed with — Charlotte, Abbie, and Fish — found it funny, too. (Obviously, his observations don't apply to all women, and, at least in my experience, as you get older, you don't have the energy to travel with extra makeup or make mac and cheese at two in the morning, though you do still make your friends analyze all your texts from your crush.)

Robbie said he was thrilled his new friends let him into their group so quickly. "The most pleasantly surprising thing about living with them was how quickly they accepted me as part of the group and began to look after me," he told BuzzFeed.

Robbie also noted that while his thread was the one that sparked fame, Charlotte, Abbie, and Fish could have provided their own insights into what it's like living with a dude. "I have commented an awful lot about their behaviors, but I'm sure they could write just as much if not more about me," he said.

It's too bad they didn't, since in my experience, male roommates take even longer in the bathroom than female ones, and leave beard trimmings all over the sink, and take over the television for hours so they can play X-Box with strangers on the Internet. But they are also very good at fixing broken radiators and reaching the paper towels on top of the cabinets, so they can stick around.