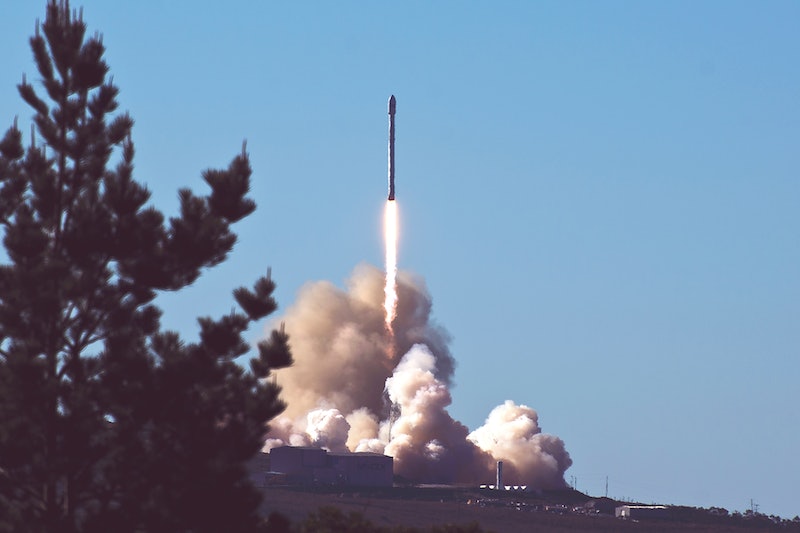 From former President Obama being born in Kenya to the belief the moon landing was faked, conspiracy theories are everywhere. Even though scientists have debunked the claim many times over, some people still believe the Earth is flat. They claim that any pictures or satellite images that show a round Earth are part of a broad government conspiracy, and one man has really committed himself to the idea. According to the Associated Press, a man named “Mad” Mike Hughes will launch himself into the sky in a homemade rocket to prove the Earth is flat on Nov. 24. There's a lot to unpack here, and it's hard to know where to start.

He built the rocket in his garage from salvage parts, and it's powered on steam. His launchpad is a motor home that he's converted into a ramp. The world's wildest DIY project has cost him $20,000 over the last few years, and it's sponsored by a group called Research Flat Earth. He's described as a "self-taught rocket scientist," which doesn't seem like it makes a ton of sense, but I'm willing to go with it. He told the Associated Press he's "a walking reality show," and also doesn't believe in science.

“I know about aerodynamics and fluid dynamics and how things move through the air, about the certain size of rocket nozzles, and thrust. But that’s not science, that’s just a formula. There’s no difference between science and science fiction,” he said in the interview.

You can't watch his attempt in person because of safety concerns, but according to Hughes's website, the whole thing will be streamed via Internet pay-per-view. Also, he's going to announce his plan to run for governor of California after the rocket launch. Why not? If I survived a launch in a homemade rocket, I'd probably decide to run for office, too.

The flight will take place over a ghost town in California, and he had to get permission from the town's owner, Albert Okura, before planning the stunt. Okura told the Associated Press that he's on board with the rocket launch.

"It is absolutely the most wacky promotional proposal I have had since I purchased the entire town in 2005," he said. "He is a true daredevil and I want to be part of it."

Hughes knows that the project is dangerous. After all, he's hoping to travel one mile at 500 mph in a rocket made from scrap parts.

“It’s scary as hell, but none of us are getting out of this world alive," he told the Associated Press. "I like to do extraordinary things that no one else can do, and no one in the history of mankind has designed, built and launched himself in his own rocket."

This isn't Hughes's first stunt, either. He told Ars Technica he holds the Guinness World Record for longest jump in a limo, and he also used a homemade rocket to travel nearly 1,400 feet in 2014. He hates being compared to Evel Knievel, who he calls "an average stunt guy" who "stole his look from Elvis."

Is Hughes's plan something that deserves attention or any admiration? According to most of Twitter, the answer is no. Still, you have to marvel at Hughes's dedication to this project. He's given several years of his life and saved up money to build the rocket, even though he doesn't make much as a limousine driver.

What else will 2017 bring us? I have no idea, but it's obviously a blessed time to be alive. Even though I'm still confused as to how launching yourself into the atmosphere proves the planet is flat, I wish Hughes the best of luck. May we all be so dedicated to our dreams.

More like this
Ashamed Of Your Screen Time Stats? Here's How To Change That
By Alexis Morillo
Learning To Love, Not Judge, The Lunchbox Wives Of TikTok
By Esther Zuckerman
Pret & Costa’s Coffee Is The Strongest On The High Street, According To Which?
By Sam Ramsden
Annie Rauwerda Finds Treasure In The Depths Of Wikipedia
By Chloe Foussianes
Get Even More From Bustle — Sign Up For The Newsletter
From hair trends to relationship advice, our daily newsletter has everything you need to sound like a person who’s on TikTok, even if you aren’t.